I’ve been blessed to have a wife that is a great rider. I would have posted a picture of her, but I don’t want anyone to fall in love and stuff. So I decided to borrow one from Loeka. 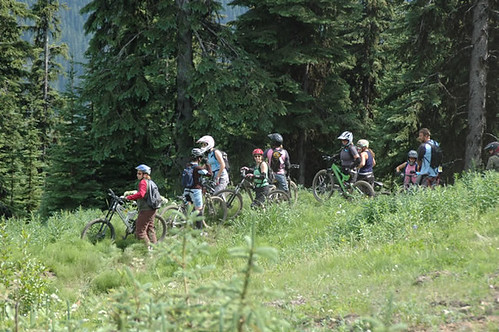 Anyhow, the title is totally true. As sad it is to say, women are the minority of the sport and anytime a female rider passes by most reactions seem to be something short of seeing a Unicorn. Most guys say, “Whoa, is that a chick? That’s cool!” Seeing a woman on the trail is as common as seeing a black guy on the trail…what you know you were thinking it!

So I’m guessing if you’re a single gal, the odds are in your favor. Think about it, the ratio is usually 1 gazzillion guys for 1 woman rider. So that means if you’re in my position where you wife or girl friend already rides, we’d better treat them right so we don’t do anything to lose them!

For the ladies that do ride, MtnBikeRiders salutes you! You go girl! Oh wait, that sounded WAY to gay. But ya, just keep riding!