Saturday I took an early morning ride down to the beach with my dogs in tow(in a trailer) so my legs were out of juice the next day. I was aching to throw a leg over the 29er anyway but woke up at 5am and it was raining lightly. Half an hour later it stopped so I headed out in hopes the trail would be tacky and only slightly wet. 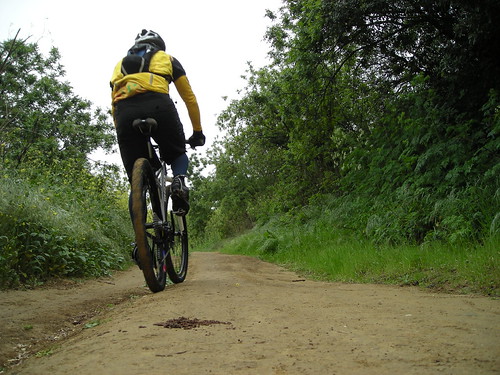 Bandi on the move

This is the 4.5 mile climb Priscilla rode up the day before. I noticed the “dirt” was sticking to my tires pretty badly. By mile 4 or so I felt like I was carrying an extra couple of pounds with me. What we have here, in certain parts, is not mud but clay. Instead of just being wet dirt this stuff literally sticks to everything it can find. My shoes are still a mess. 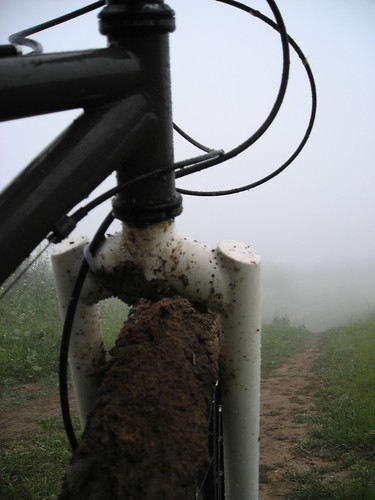 Vassago in the mist

I was surrounded by fog the entire climb. It made for a dream-like ride up the side of the hill. Very ethereal and really quiet. I felt like I was in a Costa Rican jungle. You’ll have to excuse my infatuation with the plants. We see nothing but dry, brown hills here 9-10 months out of the year. 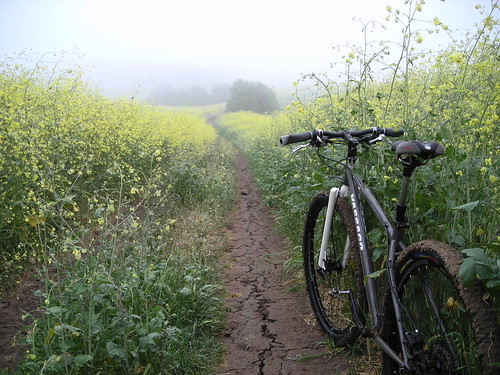 The Bandersnatch was simply an amazing ride. Rolling up to the trail I instantly noticed my rolling speed was faster than on my Heckler or any other bike I’ve ridden. The geometry for climbing is spot on too. I felt super comfortable and just cranked away. The power transfer with a full rigid setup is unbelievable.

Also a first impression on the Sette Ryde ST-850 dropper seatpost: It works great! It’s so easy to use. When I got to the apex of the hill I’d just pull the trigger and throw my weight down, then let go and I’ve got a low seat, ready for any obstacles on the downhill. Especially in the fog, the terrain would sneak up, but when I saw the hill coming I’d just pull the trigger again and up pops the seat, exactly where I need it for the climb.  The one problem I had was compressing the post. It tended to stick a little. I think this was a combination of my slight frame(150 pounds), the cold and the trail grime. I’ll lube it with some grease and see if that helps. This was only one ride but, for the life of me, I can’t fathom why someone would pay $200 when they could grab one of these for around $20.

Anyway, at the top of the climb I heard mud scraping and looked down to see this mess on the rear end. I know I’ll get grief here for riding on a wet trail, but the trail was hardpacked as you can see in the above pictures. But, again, this is clay so the very top of the ground would peel off and attach itself to the stuff already on my tire. This snowball effect ended my ride and I had to turn back once I hit the top of the climb. Scraped off most of the clay and…time for the downhill! 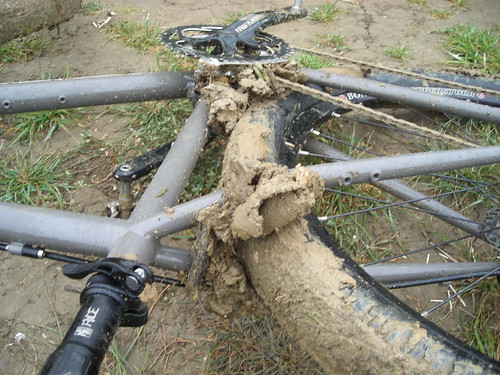 Not fun to cleanup

Downhills on a full rigid bike just can’t be fun…at least that’s what I thought before. Don’t get me wrong, if you hit a ditch head-on or a large rock, you will know you’re riding a rigid setup. However, the Bandersnatch just hums when the trail goes down. The big wheels smooth out the small chatter pretty good and if you use your body as the suspension it gets fun. Real fun.

As I was half way down the decent I actually let out a laugh. Granted this has happened on my Heckler, but to have no suspension and to be giggling on the way down? This bike is a joy to ride. Plain and simple. I can already tell this will be my go-to bike for any but the roughest rides. I was even able to catch some air off some small jumps and tweak it a bit. Yes, the wheels are large but this bike just makes them so easy to handle.  Steel and big wheels. I have them both, finally, and it is good.

7 thoughts on “First Ride on the Bandersnatch”