The owners of MtnBikeRiders.com and BikeCommuters.com have recently sold the rights to all five of the sites they own to Evomo Clothing for an undisclosed amount. When asked why Moe Ramirez and RL Policar had sold out, they simply said, “It was about F#$%^ing Time! We’ve wanted to do this for so long!â€? â€śWe worked our butts off to make sure that we got noticed and bought out quickly,” stated Ramirez. Policar said, ” I’m glad I don’t have to put up with the staff any more â€“ geez, it was like trying to babysit little kids after a night of drinkingâ€¦excruciating!”

Ramirez and Policar at the 2007 Interbike 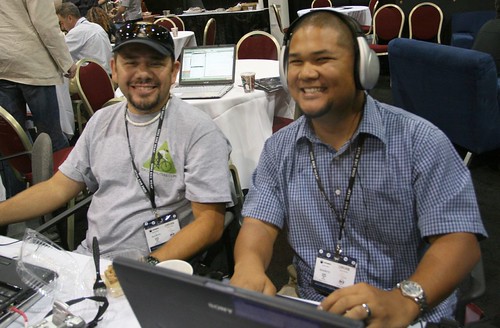 Ramirez and Policar were asked about the amount that they were paid for their brands, but refused to give concise answers to the question. Rather, Policar had said, “Just think about it this way, I don’t have to work until the end of the year! The temporary tattoos and gift certificates to my favorite restaurant, Hometown Buffet made it all worth it!” Ramirez stated that he plans on taking his family on a long vacation to Catalina Island with the money he made. “What?! Its not like I can afford to take them to Hawaii or Fiji! You kidding! No way Jose, I am taking them there because I had to make sure that I put a big deposit down on a new Hummer H2.”

The rest of the staff of the sites, including Policar’s wife, Priscilla, Jeremy Yang, Lance Lowry, Russ Roca, Khoa Nguyen and Jack Sweeney, have all been terminated as soon as the deal had closed. All six bloggers are now looking to write for other sites, but when Yang was asked what his next step was, he stated, “My next step, well, I’m going to forget about those idiots! They didn’t even tell me that they were selling off the company! This experience has severely traumatized me and I don’t think I can ride bikes again! I’m going to go back and start racing lawn mowers againâ€¦”

Priscilla Policar, RL’s wife of nearly 13 years, spoke about the sale. “You know, being married to RL for so long, I would have thought he’d tell me these sorts of things, but he didn’t! He woke up the morning after the deal had closed and demanded eggs and chorizo for breakfast! He doesn’t even like chorizo! I don’t know who he is anymoreâ€¦.” she stated.

The rest of the staff was contacted but all were speechless. In fact when Jack Sweeney, a staffer and Sheldon Brown-wannabe for BikeCommuters.com was approached, he gave reporters the international hand signal for anger and ran away, cursing loudly. 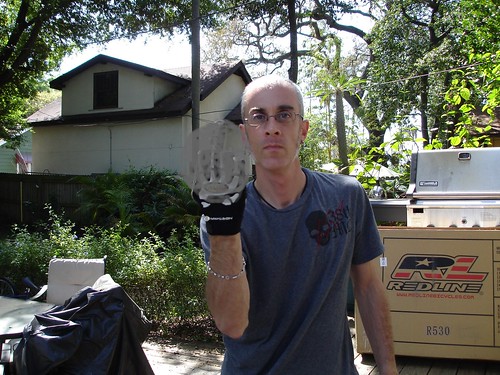 Lance Lowry, a staffer on MtnBikeRiders and BikeCommuters.com, was simply distraught over the sale, that he decided to get away from Ramirez and Policar and move from Orange County, Ca. to Portland, Oregon. As he drove away in his U-Haul Van, he was pumping his fists in the air and yelling, “Damn you both to hell!” Khoa Nguyen was found later found by family members locked in the bathroom of his new home. He too was upset about the events and was heard saying, “Up yours Moe, up yours RL, screw MtnBikeRiders and BikeCommuters.com!!!” Russ Roca, also a professional photographer and recent recruit to BikeCommuters.com, was clearly bothered by the event and was found in a Long Beach, Ca. wings and beer restaurant stuffing himself with their hottest wings and best beers on tap to wash away the pain.

“The acquisition of MtnBikeRiders.com and BikeCommuters.com from Moe and RL has been in the works since December’s meeting at the Hometown Buffet. This deal went through with only a few stipulations including the gift certificates in lieu of stocks.”, said Sedrik Vomir, Evomo Sponsorship/Marketing Director. “This is our first step towards the purchase of high traffic internet based companies in the form of blogs and user generated content. Our list of companies that we are in talks with his quite large and by 2010 we will have about 45% ownership.”

Both Ramirez and Policar will remain on staff until their replacements can be found. In the meantime, if you are interested in running BikeCommuters.com or MtnBikeRiders.com, please leave a comment below. If you are selected, you will be sent a rose, a voucher for Hometown Buffet and your username and passwords for the site. KHS Bicycles have also donated a KHS Green and Lucky 7 to give to the new Editors of the blogs as a “Welcome Aboard!” gift.

10 thoughts on “News Flash: MtnBikeRiders.com and BikeCommuters.com Has Been SOLD”