While RL and Priscilla were enjoying their weekend getaway and Jeremy and Khoa were reminiscing about their Big Bear trip, I had the pleasure of riding with “The Moe“. Saturday we met at the Albertson’s parking lot on the corner of Jamboree and Chapman. Moe has never ridden Santiago Oaks therefore I was looking forward to giving him a tour.

Knowing what I knew about The Moe, I had no doubt in my mind that he’ll be able to handle what S. Oaks has to offer. His weapon of choice for this ride was the new KHS Flagstaff 29er. 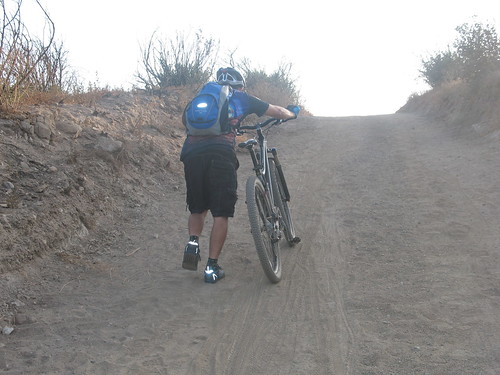 After passing through the park, we approached the dreadful 3 “Bs” (B = female K9). On the 1st B, which is the steeper of the three, we both climbed until about mid-point. I was the first to lose traction, then Moe. We dismounted off our bikes and hiked to the top. We then immediately got on our bikes and started on the 2nd B. A quarter way up, there is a cut-off on the right hand side. This is a singletrack that runs parallel to the 2nd B. Moe and I took this route which is slightly easier than the fireroad. The 3rd B was uneventful as well with the exception of my chain dropping. It was a long grind up but well worth with what the descent has to offer. 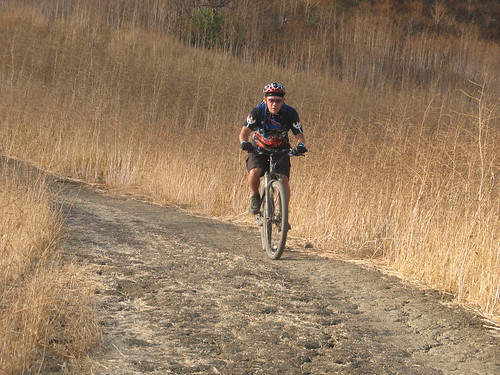 Reaching the top, Moe strapped on his armor and we were off. You can see from the video that the descent was pretty fun. It was long and flowing until we got closer to the bottom. The Moe did have a mishap towards the end. Not quite sure what happened as it appeared he was on the right line. He took a tumble but fortunately it was a minor one. He got back on his 29er and rode on.
Overall it was a blast. Always a good ride when you make it back to the car in one piece. I did notice that The Moe maybe directionally challenged 😉 Several times during the ride, as we approached a turn or a split, I would yell out either “left, left” or “right, right”…yet The Moe would go the opposite way 🙂 … hmmm, we’ll have to keep an eye on that one…
Below is a video of our ride. I had system issues saving the file so I had to slice n dice some of the clips to shorten it.

5 thoughts on “Santiago Oaks with The Moe”