This past weekend my family and I headed up to the Bay area for a mini vacation.  Since we planned the trip last minute, we were unable to find a good rate for a hotel within the City.  We ended up finding one in Redwood City on the outskirts of San Francisco.  Knowing that there is a huge mountain biking community up north I looked for trails near our hotel.  I planned on riding early Sunday and Monday morning while everyone was still sleeping.

I consulted with my riding buddies from the Bay area and also posted on a few forums.  All recommended Water Dog trail in Belmont, which is the next city to my location.  One response from the forum was to check with the Passion Trail Bikes, a local bike shop.  After doing my research, turns out the trail and the LBS were only a few miles from my hotel – perfect!

We arrived at our hotel early Saturday morning.  After we settled in, we headed to SF City.  On the way we stopped by Passion Trail Bikes.  I wanted to get a trail map as well as route recommendations first hand from the locals.  I have to say this was a top notch store on the customer service side.  (I wasn’t really looking at the products for sale or the type of bikes they carried.)  Unfortunately I cannot recall the names of the guys that were assisting me.  However they gave me clear directions, turn-by-turn, for the trail…  I also regret that I didn’t take a picture of the store front.  It had one of the most friendliest atmosphere I have ever experienced.  There were many riders hanging out – coming from or going to a ride.   Seeing this made me anxious about my ride the following day.

The Trail:  Water Dog contains approx 8 miles of trails, the majority being singletrack.  There are several sets of switchbacks which can be ridden either way – up/down.  There are quite a few ladder bridges built over gaps, turns and other rutted out areas.  There were also jumps but I did not see these. 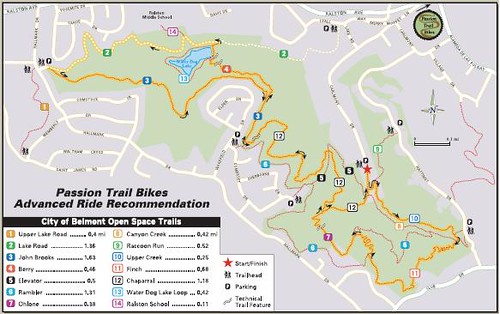 The Ride:  Following the directions given to me and with my trusty GPS, I started on a gradual singletrack climb.  This skirted the southeast corner of the park heading clockwise.  While on this trail there were many cutoffs to the right (not on the map) which led to the bottom.  From the looks of them, one could have a real blast heading to the lower part of the trail.  Not before long I was already at a higher elevation.

Along the way, I met John – a local rider.  We stopped and talked for a bit.  He gave me pointers on other segments of Water Dog.  He was also kind enough to let me tag along for portions of his ride.  We climbed parts of the park and one set of the switchbacks together.  These switchbacks were reminiscent of San Juan trail in So Cal.  Once at the top, he led me to a split where there were several choices for a technical descent.  From here we parted ways.  I wished that I had more time as it would have been a better ride following someone that was familiar with the trail rather than reading a map.  (Although I’m not opposed to it as I’d like to be adventurous, however time was not on my side.)  Shortly after John left, I ran into another local hiker.  I didn’t catch his name but he recommended other routes that were slightly different from John’s.  Never the less, both recommendations sounded like it had plenty to offer. 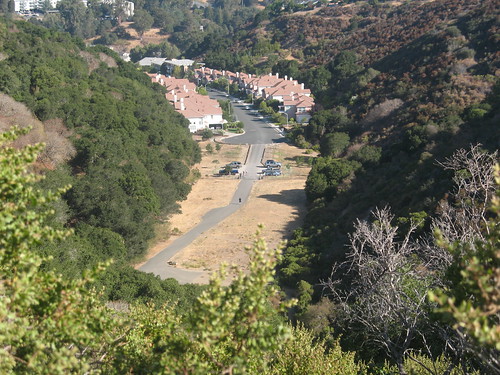 View of the trailhead from the top.

I followed some of their suggested routes without diverting too much from the map.  The trails were fairly easy to find as they were well marked.  After about an hour of riding it was time to head back to the car.  I made my way back to a segment that led to a long singletrack descent to the bottom of the trail.  It was a super fun as it crossed several ladder bridges (one utilized the top of a wrecked car; not sure how they got it up there), skirted a hillside, and through a creek bed.  I wish I had my helmet cam to record the trip to the bottom.  I was not able to ride some of the recommended trails but my experience here at Water Dog was a good one.  The trail itself was in excellent shape, the weather was awesome, the people were friendly and most of all the singletrack was well worth hauling my bike to the Bay area. 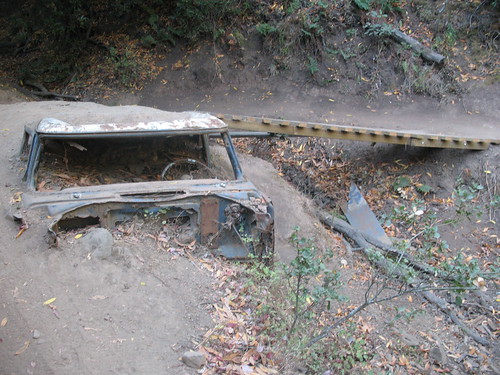 Look closely, it’s a cockpit of a car.

On Monday, we left for home earlier than scheduled therefore I didn’t not have a chance to ride again.  I do look forward to another trip to NorCal.  For those visiting the Bay area, definitely look into rides.  There are tons of trails up there and many LBS offer bike rentals. Below is a short video of my ride.