During the show, beer literally flows like water. In fact, if you get dehydrated during the show, you’re more likely to drink the free beer than pay $5.00 for a bottle of water…what I’m broke! So on Wednesday, happy hour started. We had seen one of the other media people toting around some beer and asked her where she found it. She gave us two spots, one was the Haro Booth, the other was the Power Bar booth. But we also found another booth that offered this delicious elixir.

While Moe stayed at the Media Center to upload some photos, Joe, Priscilla and I went on a trek to find some beer. We made it to the Power Bar booth and got in line. We noticed they were serving the beer in pint glasses and plastic cups. So we asked how can we get a glass. The fella that worked for Power Bar goes into this long explanation that only Dealers could receive the pint glasses and that everyone else would get the plastic Dixie cups. I jokingly tell him that we’re MEDIA and we should get some glasses since we’re the ones that tell the whole world about their products. As he went on and on about how he can’t risk his job to give us pint glasses, the bar tender gave us beer in glasses…hehe. So then I turned to the fell and said thanks, but Mr. Power Bar Employee got mad and scolded the bar tender…

Then we we were off to get Moe some beer since they only allowed 1 per person at Power Bar. We headed over to Haro, but they were all out. But Oakley was giving away some Coors Light right across the way, so Joe and Priscilla loaded up while I watched from a distance.

When we got back to the Media Center, Moe was pleased…well we all were. Beer was a much needed treat after working hard all day long. 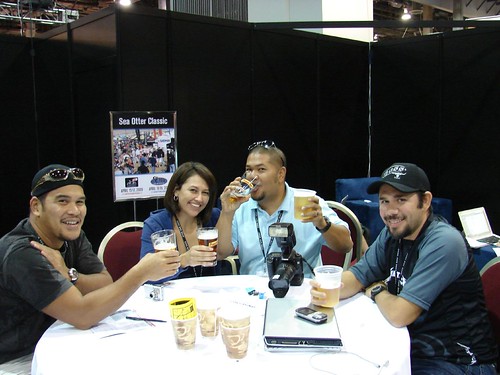