This race was something the whole team was looking forward to. What made this event unique is the actual races being hosted that day. They had the XC race in which this was the last of the Triple Crown Series, Super D and Downhill.

Priscilla, Joe, Kim, and Eric as well as our friends Val and Ner were all racing in XC. Rather than me spoiling how everyone did on the race, I’ll let them post their own reports so you can find out. Let’s just say, the MtnBikeRiders.com Racing Team did REALLY well in XC.

Then there was Super D, both Kim and Moe raced in this event and again I’ll have to stand down from announcing how things went.

Waiting for the shuttle. Check out my new POC helmet and goggles. 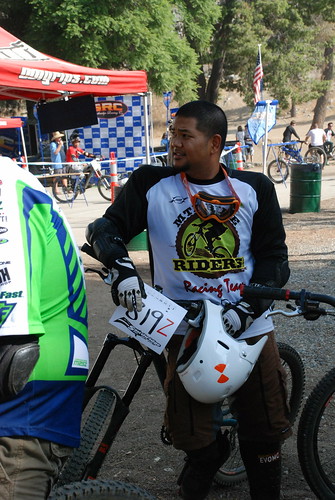 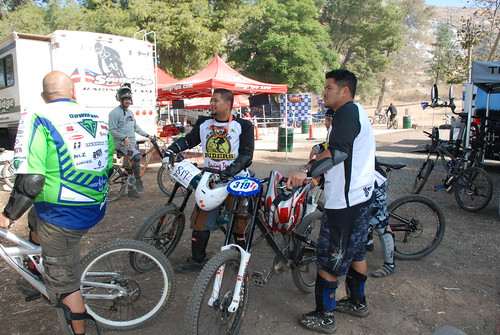 So here’s where the Downhill Racer report comes in. I’m not so sure if I’ve really mentioned it, but I raced in the DH event on Sunday. Sport racer Tony Finch and Joe Solancho both raced DH as well. After the XC race on Saturday, Tony and I decided to get in a practice run. But since the line for the shuttle was super long, I was only able to get one run in. 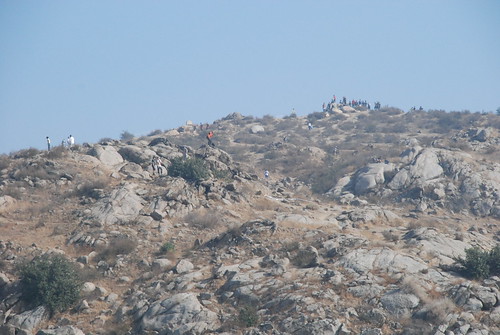 During my practice session on Sunday morning, I managed to make it without any problems down the mountain but when I was coming through a technical rock garden, I totally munched it. I struck a large rock and OTB (over the bars) I went. Luckily I was wearing my Sette Impact Protective Suit and Knee/shin guards to keep me safe. As I flew in the air and eventually rolled on the ground, I saw my bike, the Ibex Ignition 3 flying in the air. After I bounced back up, I looked around to see if Priscilla and the kids were there since they were waiting for me to come down the mountain so they can take some shots of me. But instead I was greeted by 50 people laughing and cheering at me. Hey what can I say, I like to entertain! In all seriousness, I’m glad I wasn’t hurt.

After that crash, it really messed me up mentally. I knew that one section of the trail was going to be the thorn on my side. But fortunately, Joe told me that once I hit that rock, the officials decided to remove it since I dislodged it from the ground and was deemed unsafe. 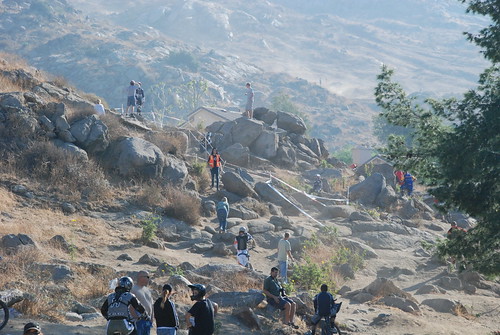 As race time approached, we were shuttled up to the top. Since this was my first DH race, I didn’t know anyone there and tried to strike up conversations with other riders. Funny thing was, one rider says to me, “weren’t you the guy that crashed earlier?” I say yes, he responds, “THAT WAS AWESOME MAN!”…again, I like to entertain.

As they call out riders’ names, we all line up. Joe gives me a fist pump and wishes me luck. As I get up to the make shift starting line/gate, they count you down from 30 seconds, 15, 10, 5, 4,3,2,1…and I was off! everything seemed to have gone mute. The only thing I could hear was my breathing.

While I’m riding through the technical single track which was married with big boulders, rocks and ruts, I felt good, but suddenly I noticed something strange. My Marzocchi 66L fork wasn’t working properly, I look down, and I saw that I was fully compressed….LOCKED OUT! NO! Since I couldn’t really figit with the fork on my way down, I just rode the bike like my rigid SS.

In the video you’ll see me coming down the mountain and if you look closely, you’ll notice that the fork was compressed. Anyhow, on the last leg of the actual mountain, I come around the corner, and I see Tony Finch cheering me on, then further down the trial was Moe, and Kim. It really was encouraging to see them there, it gave me an extra push to work even harder than I already was.

Once I got down off the mountain and headed towards the rock garden, (where I had crashed and currently where over a hundred people were watching) I was able to mess with the ETA valve on the 66L. I turned the dial and POP, the fork bounced up from being locked. Now I felt even more confident in being able to ride through the garden. 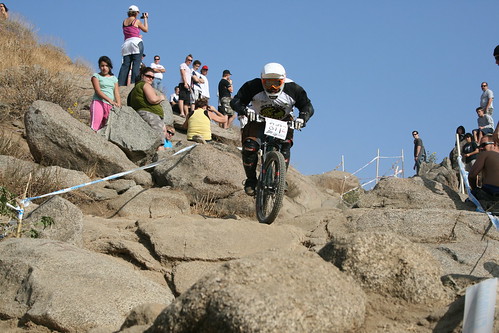 While maneuvering through the obstacles, I can start hearing cowbells and cheers from spectators, then pass my crash site, and then I hear the words, “Go Daddy!” and something along the lines of “babe.” That right there gave me my last burst of adrenaline and allowed me to sprint to the finish. 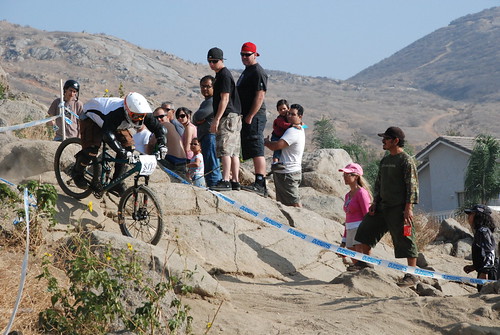 The end result, I cam in 15th out of 23 racers in the Beginner 27-34. I was hoping to do better, but then again this was my first race and I was going against some really good riders that rode on bikes that were at least 5 times more expensive than the Ibex Ignition 3. 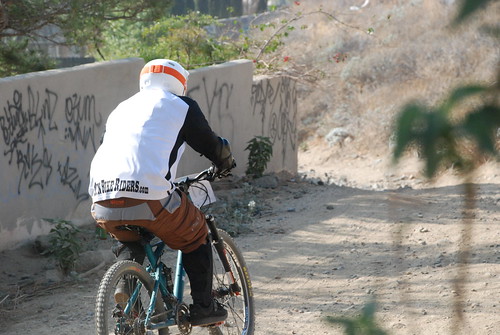 Overall I was glad I made it through in one piece. My 3 goals for this race was to finish, catch the rider in front of me and not to let a rider catch me from behind. I recall right after I pass the finish, I quickly looked behind me to see if the dude after me was on his way. But fortunately he was quite a distance.

This really was a great experience for me. At first I wasn’t so sure how much I liked racing DH. I mean, I love riding technical stuff and enjoyed the trail. But the pressure of it wasn’t all that great for me. But the more I thought about it, the more I want to go back out there and do well. I know I could have done way better than I did. The Southridge Winter Series is coming up in January, so I may try my hand at it again and see how well I do.