This past weekend was a busy one… I raced both XC (Sat) & DH (Sun) at the 17th Annual Southridge Challenge, Fontana, CA.  Saturday was the last leg of the XC portion of the Triple Crown Challenge (TCC).  The 1st was in Bonelli Park, San Dimas, CA (Oct) and the 2nd at Mt. SAC in Walnut, CA (earlier this month).  We had a strong showing from our Team in different disciplines of the Fat Tire – XC, SS, Super D and DH.

Saturday:  I was faced with 8 other competitors.  Three were familiar faces from the other two segments of the TCC.  Two were my regular nemesis (friends really) from the 2008 racing season. 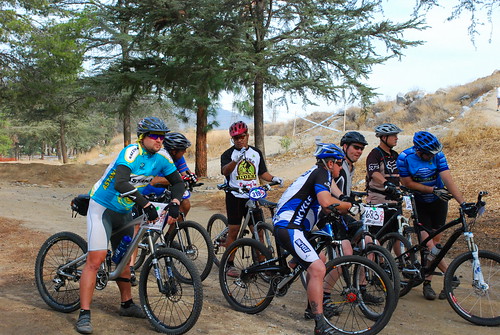 At the starting line, we were grouped with the Women’s 35+.  At GO, we sprinted on a flat dirt road which quickly turned into an elevated left-handed U-turn.  Here is where I experience the first hold up.  At this turn, series leader Mike D. falls, then a lady from the 35+ group.  Half of the racers that were stuck behind them (including myself) were forced to either dismount or find an alternative route which caused us seconds that counted.  As I made my way past the crash, I sprinted to chase the pack.  From here I would stay behind teammate Kim Finch.  Approaching the first real climb on dirt (where the DH starts), Kim and I pass our friend Val (he looked exhausted).  We passed him then made our way to the winding singletrack.  At the bottom we caught up with our other team mate Priscilla Policar.  We would ride together for a bit, while motivating and encouraging each other.   Passing the smokestack-like structure is another climb.   From the bottom I see Scott V. (a clyde in my class) reaching the top portion of this climb.  From here I broke away from Priscilla and Kim in hopes to catch Scott.  (There is history with Scott and I, as we battled throughout the year.  We took turns placing better than each other at various races.  He is currently one-up on me so I was really motivated to catch him!)

I made my way down another singletrack segment, through the paintball field, then up the final climb… I can see Scott up ahead.  I continued to grind up.  I knew I had to close the distance.  When he reaches the final singletrack descent he’ll open up the gap.  Through the singletrack at the backside of Southridge I tried to go as fast as I can.  Reaching the left-handed drop into the culvert, I see Scott on his way back on the flats.  In front of him was Ner (Val’s brother) with a big smile.   On the flats I big-ringed it back.  From the distance I see Scott and Ner pulling away…man these guys are fast!  Coming around the riverbed/aquaduct area I see Ner but not Scott… uh oh!   I knew we were almost finished and this was not good.  I finally caught up to Ner and passed him but Scott was no where in sight.  I ended up finishing last in my class.  Despite not catching Scott, I was please with my race.  I came in last but my finishing time was better than any of my previous races in Fontana. 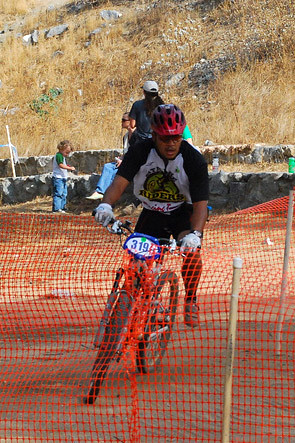 Overall I felt good about the race and my performance of the series.  Prior to the awards for the overall results of the TCC, they posted me as 3rd place and totally omitting Mike D. (series leader).  As RL stated on his post, I took the liberty of advising the officials that Mike was not even on the list and should be.  After recalculating the points, Mike was on top and I was bumped down to 4th.  Bad thing is there is no recognition of 4th  as they only went three deep for the awards.  Never the less, I was pleased with myself for racing all three races and finishing each one.

Sunday: Armor time… I’ve ridden on Fontana’s DH course several times but have yet to race on it.  This was the day.  Around 8:30ish, I met up with RL, Priscilla and their kids.  After preparation and seeing the line for practice, it would appear that we will only have time for one practice run.

As I stood on top of the mountain, I have to admit that I was very nervous.  With this many people and not familiar with the course I was intimidated with the pretty much everything.  RL went first on the practice run.  I gave him about 5 seconds they off I went after him.  I tried to stay on his heels as I wanted to follow his lines but as soon as we started winding through the upper rock garden panic set in.  The rock sections were fairly easy but after not seeing which lines to pick I stalled out.  I have to admit I walked several sections but had every intentions of re-doing it.  As I made it down to the bottom, before the lower rock garden, RL was waiting for me.  As I neared his position, off he went and I followed.  I stayed behind him heading into the rock garden then… he was OTB!  All I see was his green bike up in the air.  Fortunately he was ok and got back up, then rode to the bottom.  I followed him shortly after reviewing the lines through this section.  At the same time the course officials were telling everyone to ride through as practice was over.  Darn, that means I’ll only have one run.

From the end of the practice until our start time was a good 1.5 hours.  There was plenty of time to think about the course and the lines to pick.  But for me anxiety was kicking in.  I was nervous, MORE than any of my other DH races that I have entered.  For some reason the “rocks” were really intimidating me and I could not shake it from my head.  Often I found myself pacing or just trying to walk around to stay calm.  This is typically not me.  About an hour prior to our start time we lined up for the shuttle.  RL was first to be taken to the top then I followed shortly.  Reaching the top and seeing RL was a relief.  Still nervous, I made small talk with several other guys that I have seen in previous races.

As my group lined up, I was first on the list.  The group in front of me was a Women’s group.  They will give the last woman (Lala w/Incycle) and I a one minute gap as oppose to the 30 sec between riders.  With many thoughts of the course running through my head, I tried to stay focus.  Donny says “Joe, go on 1”… At 1 I sprinted down to the bottom.  Approaching the upper rock section (where I walked in practice) I put my trust in my bike and maneuvered through the rocks.

There were a few areas where I slowed down, such as the corners with huge ruts, but I managed to get through them smoothly.  Somewhere in the upper section, I heard Johnny D (racer after me) on my heels (on the video posted by RL, you’ll see Johnny go over the bars right behind me).  Reaching the bottom, by the cul de sac, I was very close to catching Lala.  She heads into the lower rock garden but slows down just before the spot where RL went OTB (in practice).  By this time I was literally on her rear wheel… With no momentum and thoughts of crashing, I dismounted off my bike, placed it on the step down and got back on. 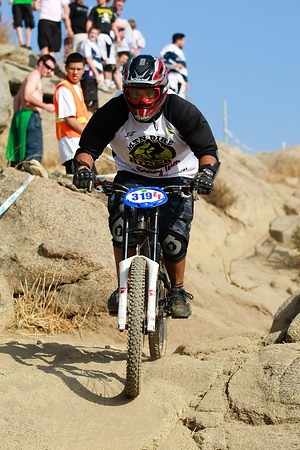 I rolled through the remaining rocks and headed to ‘the wall’.  Here is where you test your legs as it is a long sprint on a 40+ lbs bike. At this point I finally pass Lala and make my way to the finish line! 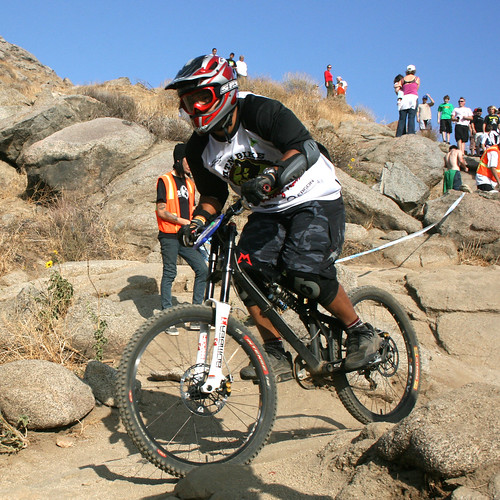 In the end I finish 4th out of 6.  I was very relieved that I made it to the bottom unscathed.  I know I wasn’t going as fast the others but it was a big weight off my shoulders and a relief mentally just to complete the course. 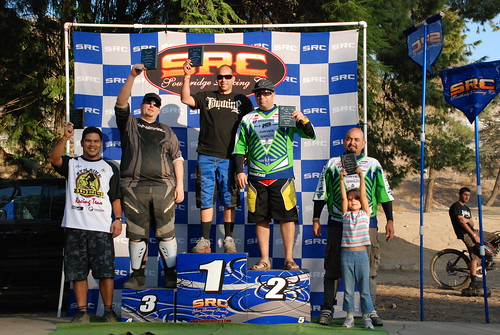 I had a great time participating in the Triple Crown Challenge and the DH on Sunday.  I cant say it enough that our Team rocks!  This weekend we had racers in XC, SS, Super D and DH. We podiumed in each category! 2008 has been a great year in racing!

Many thanks to our sponsors – MtnBikeRiders.com, BikeCommuters.com, Evomo, Ergon and Hoss!!!