RL Policar-Eric “The Animal” Hunner is our BIGGEST racer on the team. Not only does he stand at a towering 6′ 24″ tall, he also weighs somewhere around 240-900 lbs, and that’s ALL MUSCLE. This guy is so powerful, his torque when he pedals is strong enough to snap crank arms in HALF! Yes I said in HALF! With all that said, for a big guy like Eric, who can easily outweigh his competition by at least 100lbs…this gentle giant can move like a cheetah.

I did not know if I was going to make it to this race, there were a few issues I needed to take care of. First off the Holidays, need I say more. My training time was more then cut in half. I tried every home baked goody at least three times and ate like a king. The weekend before the race I was stuck in bed with some nasty stomach flu. My training for this race consisted of watching movies and eating junk food. 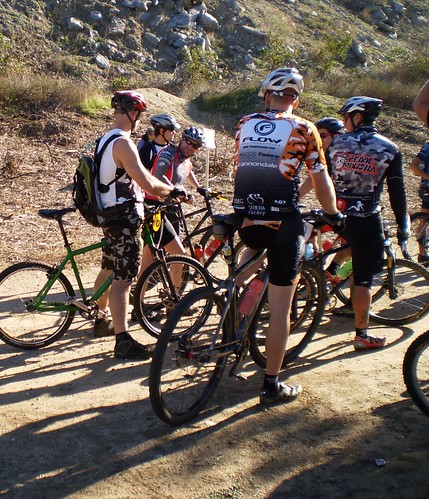 Next there was the bike, there was this nagging problem that popped up in the last race at Southridge, it felt as if the rear brake was dragging. Upon closer inspection I found that the bearing flanges on the rear axle were binding on the hub under weight, and pedaling due to a tweaked axle. One day before the race I stopped at the LBS and picked up a set of inexpensive Single Speed wheels. I got home slapped some skinny 26×2.1 on rode it down the street and parked it. Well I am almost race ready. I just pack up for the day and get the family in the truck bright and early to make the trip to Fontana. 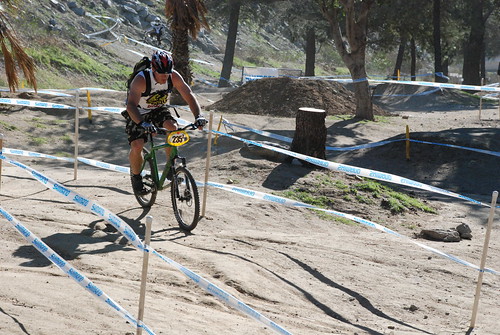 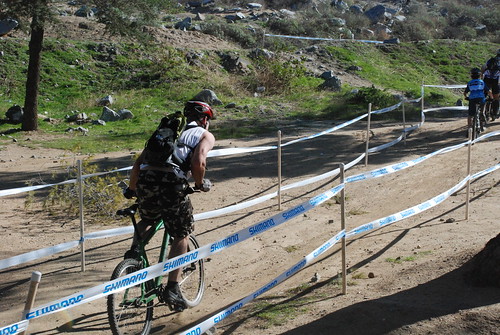 Driving to the race was an experience in the Santa Ana winds. A Semi trailer was laying on its side on the 60 Freeway near the exit to the race, palm trees were bent over, and dirt was in the air. I knew this was going to to be rough racing due to the winds, my prediction was right. I really thought I was cutting it close to cut off time for SRC registration, I made it in time. Registration took a
while because it was the first race of the season and number plates had to be labeled. 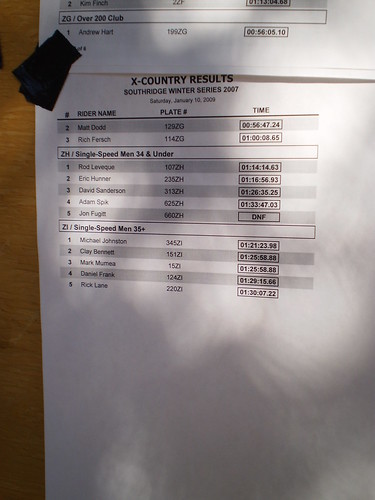 I get back to our base camp and get ready asap to line up at the start line, no warm up riding before this race. I chat with some familiar face’s in our Single Speed group and introduce my fellow Teammate David Sanderson to the group. Thirty seconds to start. The race starts we take off with the pack and we catch a slower rider from the previous group, all of us Single Speeders start to pile up behind this rider. I break out in a sprint to get in front of this rider, the competition follows. I kept the lead for a while until we hit the road to the water tower. The Santa Winds were pushing us back down the hill, my lack of warming up surfaces while climbing this hill, two SS pass me [in another class 35 & up], ouch! That fired me up, I didn’t want that to happen again. Rod Leveque a fellow competitor was having a good day, he was fast, and smart on his lane choices when climbing around traffic. Rod passed me and a few other racers on a technical uphill, I caught up to him at the finish line two minutes off his time. Rod with Team Jenson collected first place, Eric “The Animal” Hunner and David Sanderson with Team Mountain Bike Riders collect second and third place. 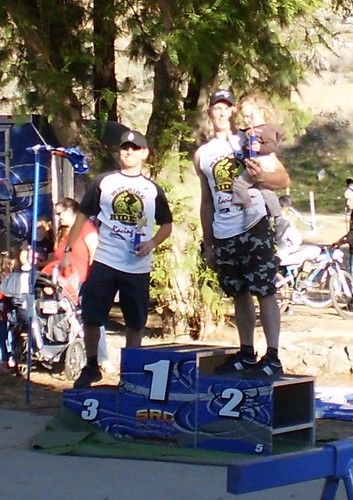 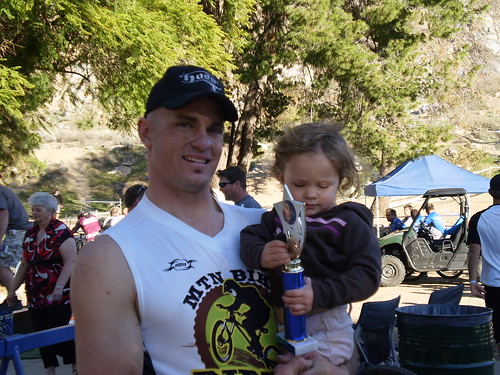