We are finished with the third race in the SRC winter series! The weather was cold and wet both Saturday & Sunday. I chose to run the Super D race and the Downhill race this week and let the XC race to Priscilla, David & Eric.

Saturday morning we headed up to the top for some practice on the DH course, Donny has split the course this week and I must say when I saw it from the bottom I was glad that I was not running the course line that I could see from the asphalt road. We ran into Roger from “The Path Bike Shop” he joked as he told me that the the line I saw was for the Super D course. Gotta love Roger & Nancy! I laughed and head up!

First run down I was nervous, top section was pretty sweet with sweeping turns then came up what I called the Water Fall, stumbled through and then hiked right back up and found a sweet line right down the middle. I was pretty comfortable as long as I kept some speed. Then a few turns later and there is was “The Rut”! Wide and deep and on the right hand side of the turn, I was told later to keep my speed up and stay high. But not matter how much I tried, the back wheel was like a RUT Magnet! So I decided at that point that no matter how many times I tried it I would just let the wheel slide in and continue to pedal out of it. That worked on race run! Then I came up on the “Saddle.” OK let’s be honest I never made it up that section! The upper rock garden continued to give me problems and the wet rocks made me extremely nervous! I rolled so slowly through that section even on my race run I could have walked down faster!! HAHA! From this point I found a hard right turn that I LOVED! Tony the “Wizard” called it my Sam Hill corner. The straight away from there that merged with the expert run was slick, by my last practice run (3rd) I found it to be best described as a Slip-N-Slide. The rain made it so slick and I went sliding!!

Super D race was “WET” “COLD” and the wind started to blow! We are all at the top waiting for Donny and begging for the wind to stop. There was talk of snow up there! MoeJoe & JoeJoe were up at the top and they were being very manly! Braving the cold! However, I was huddled behind a rock formation with David’s jacket, trying to stay out of the wind. Of course it was funny because one of the young racers that was there was doing the same thing as I was. Shortly after David thought it was not a bad Idea and joined us. The Super D course was very fun! It took us backwards of the XC course which is the 3 “B”s I like to refer to them as. It’s strange going the opposite direction of a course you climb all the time. I noticed on the start there was a boulder on the trail, I had to ask myself where that came from! 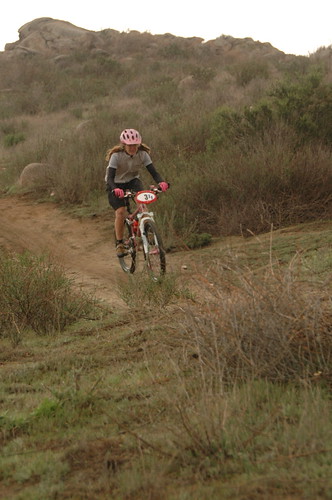 Of course it was there all the time but it just looked so different! I had a blast blazing down the trail. I did find quickly that my brakes didn’t want to work through the first couple turns but I dragged them slightly and they dried out quickly! There was only one other woman racing this one and she was in the Pros. The course really was fun even though it rained the entire time and mud was spiting at me from my own bike! 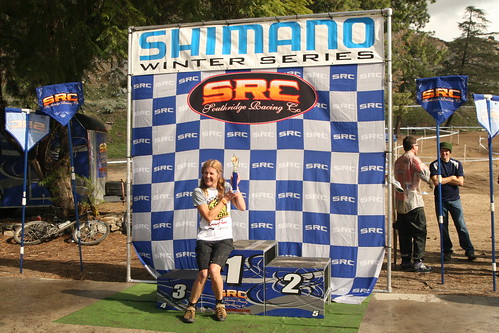 DH race well what can I say! I was cold and nervous. I was still not comfortable with the wet terrain. RL, Moe, Joe & Tony were all at the top chatting and having fun! I did find another rider that was even more nervous then myself & Lala, her name was Tracy. She was so sweet, Lala & I made jokes to try to calm her. Finally start time. Count down…1 I’m off. My top turns are perfect, I hit the “WaterFall” just as I planed it and I was thrilled. Came to “The Rut”and again tire slide into the rut but by now was harder to pedal out of. I hit the saddle, still don’t have enough speed to make it to the top and start down the rock garden, I am toe tapping my way down. I am good over the next little section, and came around the last rock on my right to clear and then FLASH a camera goes off! I almost ran him over! The only reason I didn’t was because he moved since there was no way I was going to change my line! I hit my Sam Hill corner and then off the straight away. I hear David as I go past him! I am almost home! I shoot the rest pretty well and across the road. I hit the “GAS” pedal to head into the lower rock garden! I hit the top, clean, then the middle rock section clean, little bobble but nothing that threw me off line or even made me nervous. Of course it helps that I always vision Joe laying right in my line area from a previous crash! Thanks Joe! 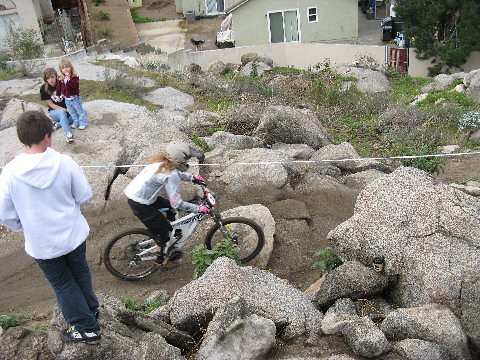 Then one little last rock section to clear….I took the wrong line, I felt my tire slide of the rock and I get bucked. Not off the bike but I remember my hands on the handle bars and my stomach was where my butt should be on the seat! Something clipped my ankle and I could feel pain but the cheer of the crowd that I didn’t crash..or maybe they were disappointed…but either way I headed for the wall! I didn’t stand and pedal it out, but I did mash it while in the saddle to the finish line. There I find Joe High 5ing and Moe who looks a little dazed! We wait and cheer the rest of the riders and team member RL as they cross the finish line!

All in all the Team was once again a huge support and everyone did great!!! Thanks to everyone for their support! 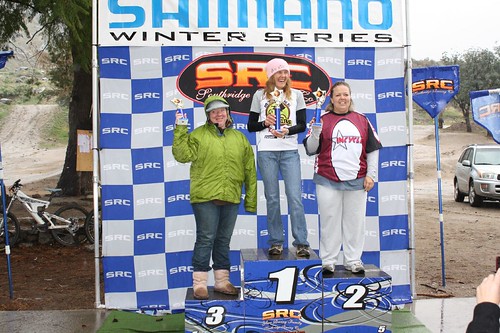