This race was the 2nd to the last of the 6 part series. You would have to race at least 5 of the 6 to qualify for the overall points. So far, I’m the only one in my category that has raced at least 4 and the next race on the 22nd would make it my 5th race. So with that said, I’m leading the points to win the series for the 200 club.

After coming 2nd to my friendly arch rival, Johnny D. of KHS Bicycles, I was pretty determined in making sure I took first this time around. I had put in more time with my training such as adding running to my regimen and trying to build up to 100 push ups at a time. So far I’m at 35 without stopping, but I can do 85 total before I start crying. I know its a long ways to go, but I’ll get there soon. I also dropped some weight to lighten the load on the bike in hopes it would make me quicker. Don’t fret, I was still over 200lbs on race day. 207lbs to be exact.

I was able to get some practice runs in on Saturday and on Sunday. I felt pretty good about the steep and loose terrain. However, there was one right handed flat turn that I had crashed at on Saturday and it continued to give me problems on my practice runs on Sunday. This flat right turn came up quick and since the ground was loose, I would easily wash out.

Fast forward to Sunday. The seed list was posted and it showed that Johnny D, did not make it. But I had another big guy racing against me. I wasn’t quite sure who he was, but I recognized the name and have seen this fella get on the podium in the Sport Class in previous races. His name on the list was something different from what his jersey states, “Dirty Mike.”

As we waited at the top of the mountain, Dirty Mike and I got to talking and I found out that he had broken his wrist on the rainy day race we had a while back. He’s feeling better but not 100% and still decided to race. Keep in mind he’s normally a Sport racer so already I was feeling insecure. The 200 club is pretty much an open class, but for the most part, beginners race in it.

Anyhow, so we line up, I get counted down, 5,4,3,2,1, and away I go! I maneuver through the first sections of the course, and I get to my least favorite part, the flat right turn and over shot it and slowed down significantly. I recover and get to the off camber single track then down the dreaded fast, steep and loose chute, down the G-out with a big boulder in the middle of it, wow! I made it through!
Photo Courtesy of Eric Foltz 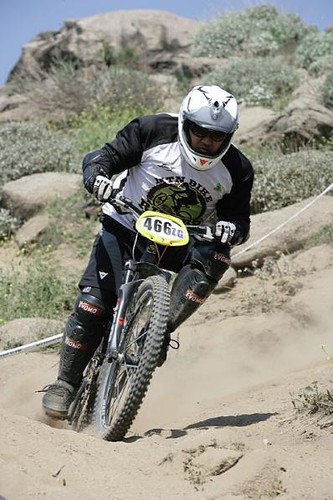 I hit the paved road and figure I can use my big ring, I shift and I’m not moving! I look down and noticed my chain dropped on the outside of my cranks! ARGH!!!! I eventually get it back in and then I coast into the lower rock garden. I make it through with no problems and I’m pedaling with everything I have left through the infamous WALL.
Photo Courtesy of Sharky 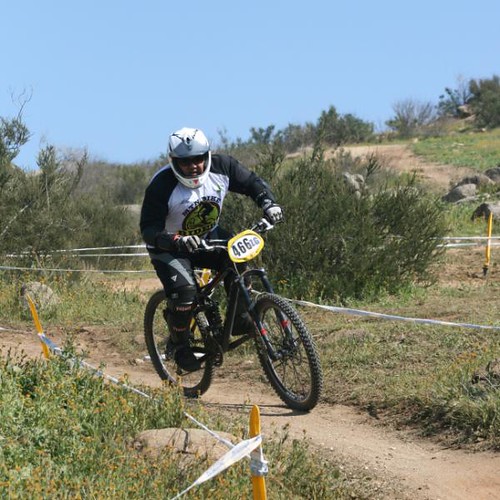 I cross the finish line and my lungs and legs were on fire. I couldn’t get my helmet off fast enough. Dirty Mike rolls in shortly after I do and I gave him a pat on the back for a good job. We ride back to base camp and the results were up really quick.

The MC started announcing the winners over the PA. They also had the results up on the board. Moe had actually gone up to check and comes back to ask me, “do you want me to tell you the news, or do you want to wait for the announcement?” Moe has on his Poker face and I wasn’t quite sure if he had good or bad news for me. So I decided to wait, and the MC said, “200 Club, 2nd place…(he states the other fella’s name), in 1st place, RL Policar!” Our camp cheered and I threw up my hands in the air as I said, “YES!” I let out a sigh of relief… 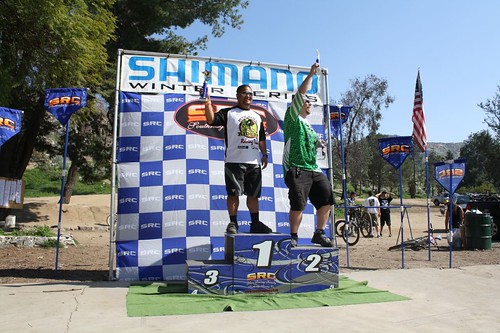 Now we’re off to the finals in 2 weeks, wish me luck and hopefully I can repeat this weekend’s results! I’d like to thank our sponsors, Evomo Clothing, Ergon USA, Hoss MTB, and BikeCommuters.com. 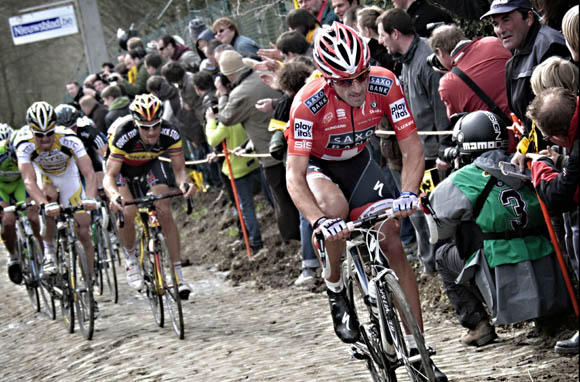