This past Thursday I headed to Aliso Woods.  I’ve been dying to try a new route that would take me from Aliso to El Moro.  I downloaded the route through Geoladders.com however for some reason from the start of my ride, I could not get the GPS to navigate and direct me to the right path.  I decided to forego this new route and stick to my normal ride when riding Aliso.  It would be up Cholla, down Rock–it, up Cholla again, then down Lynx.  Heading down Rock–it was a blast as usual. Floating over the rocks on my 6.6 is something I could never get tired of.   Reaching the bottom I turned into Coyote trail towards Cholla for my second round of climbing.

Approaching the bottom of Lynx trail I see a female rider stopped.  As I reached her, she asks “do people go up this trail?”  I said “No, typically everyone comes down this as it’s a fun descent”…. It was obvious that she has never been to Aliso Woods before.  Fast forward the conversation, she introduces herself “Hi, I’m Jill”.  I then recognized her and asked “Jill Kintner???” With her pretty smile she says yes and asks if she can tag along.  Now I wasn’t going to pass up an opportunity to ride with a World Champion and a Bronze Medalist from this past Summer Olympics … so I said “Let’s go, I’ll give you a tour”. 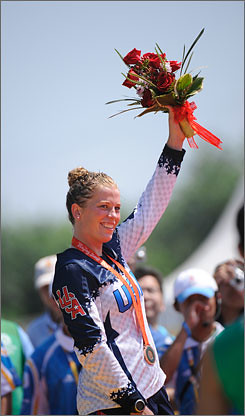 From here, we headed towards Cholla to climb back up to the top.  For those who are not familiar with Cholla, it’s a long grind up on switchbacks which are steep in several sections.   From the top of Cholla, we rode towards Lynx and went down on this rocky/rutted singletrack.  Fortunately my helmet cam cooperated and I was able to record the ride (although I cut most of it out on the video below as it was too jarring). 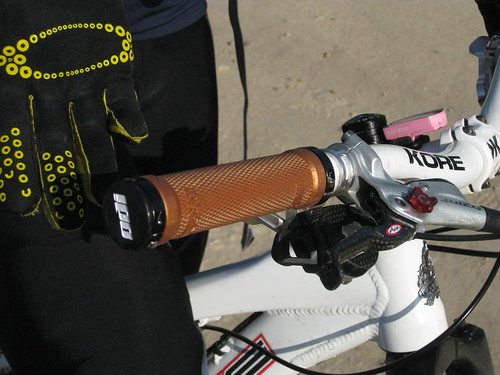 Bronze grips for a Bronze Medalist.

Typically I would be finished with my ride call it quits by now.  But since the World Champ wasn’t done yet, I wasn’t ready to end the day.  She asked what other sections were fun in Aliso.  The only thing I can think of was coming down Mathis, but that means we’ll have to climb Cholla again.  Up for the third time, but by now my legs are starting to give.  I actually stopped somewhere in the middle to rest for a bit, while the World Champ was cruising to the top.  From the top of Cholla I had a chance to rest some more.  Jill was on the phone so I took the opportunity to grab my phone and text RL saying “You’ll never guess who I’m riding with” 🙂  From here we headed towards the top of Mathis.  Now Mathis is another fun descent; longer, however not as technical as Rock–it or Lynx.  Reaching the bottom, we headed back towards Cholla where we parted ways. 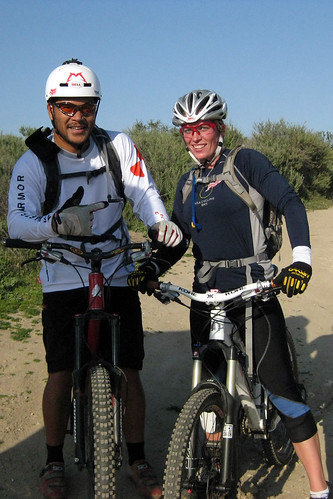 Jill and I at the top of Cholla.

Jill was fast on both descents.  Quite impressive for someone who wasn’t familiar with the trail and rehabbing a knee.  Man, what an experience!  How often would one have a chance to give a Pro/World Champ/Olympian a tour of a trail?  It wasn’t just a simple giving of directions but to actually ride several segments of the trail and see that they are having as much fun as you are…what a blast!

Jill Kinter, a Seattle native was down in So Cal training and visiting her sponsors.  Formerly with GT, she is now riding for my favorite bike manufacturer – Intense Cycles.  She was on her new Tracer VP and diggin it!  Jill was also riding flat pedals (non-clipless) while still in recovery from her right knee surgery of a torn ACL.  Look for Jill to make a comeback this year in Mtn Cross and Dual Slalom.  Most of 2008 (if not all) was dedicated to BMX in preperation for the 2008 Summer Olympics.

Jill will racing in the Kenda Cup National Series.  We should see her in Fontana, CA at the end of this month.  Below is a short list of her accomplishments: