All week Weather Forecasters were predicting that Sunday would bring rain to Southern California. But as you know weather people are always wrong at least half of the time. I got up around 5 am to get the trailer ready to head out to Fontana to do some practice runs. Fellow team mate, David Sanderson agreed to go with me and take in a few practice runs.

As I drove on the freeway, rain started to come down. In various parts it would sprinkle then a mile later a big down pour. However, when I got to the venue, the place was still dry. As soon as I was done setting up base camp, rain had arrived with David.

We suited up and got on the shuttle van only to be greeted with a pouring rain. The van was full of racers and we all talked about how nasty the trail will be. I sat in the middle row and as the van pulled up to the top of the mountain, one at a time, the racers placed their helmets on their heads then quickly exited the van. The whole scene reminded me of some sort of action movie where the Commandos are being told to get out of the plane/truck and head into battle.

David and I lined up at the gate and the rain was hitting harder than ever. The wind was blowing at pretty good rate as well. The race course was far different from the dry and loose sandy conditions from the day before. Now it was a slippery mess and when you combine that with big rocks and boulders, its a Molotov cocktail for disaster.

David started before I did and I gave him at least a 5 second start. When it was my turn, I maneuvered through the course like an old lady on a Sunday stroll on her walker. I made sure I took my time to remember the proper lines, and taking extra precaution to be careful not to do anything that would cause injury. I don’t know about David, but I was slipping and sliding the whole time. I made it down to the bottom of the course, passed the finished line. We headed back to camp to wait for the rest of the team. As soon as Joe, Kim and Tony arrived, we jumped on the next shuttle to do another run. This time the rain had stopped a bit and the course was more tacky than muddy.

Races started at 10:30 am sharp. However, my category was the last group to go and that meant we had about a 2 hour wait before we had to line up. Around 11:30am, we loaded up on the last shuttle run for the day and made our way to the top where staging was occurring.

I saw off the rest of the team before having to line up. My only competition was Dustin, whom I had previously beat. Johnny D of KHS decided to retire from racing and focus on photography.

I forgot to mention, since this was the finals, I decided to have a bit more fun and wear my pajamas for the race. I orginally wanted to get a suit, you know, an old tux from the 70’s..but didn’t have enough time to do so. 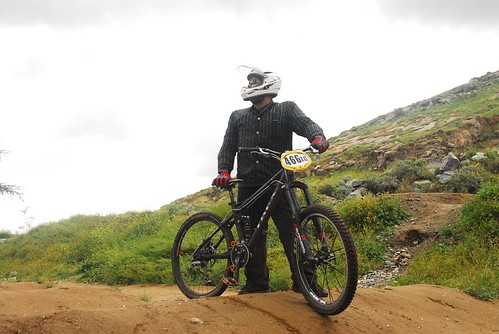 I line up, and off I went. It’s really funny, during practice times, I have such a hard time with a course, but when it comes down to the race it self, I do a bit better. I nailed every turn and only put my foot down on one turn because I slipped. I am on my down to the last part of the mountain and as I turn the corner, I see a rider down, It was Traci Adams (Kim’s competition).
Photo courtesy of DALE RH 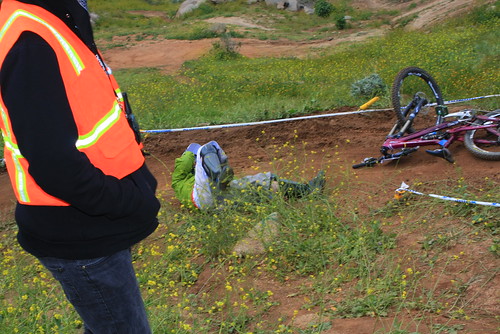 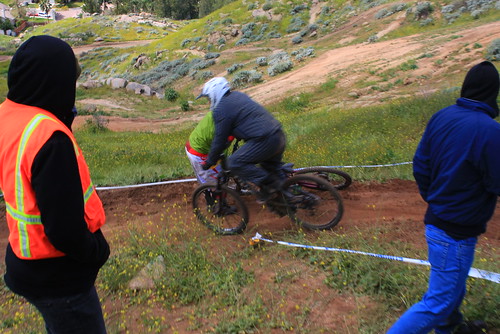 I slowed down and even wanted to stop to make sure she was ok(its the Dad in me). I asked her if she needed help, she declined and said she was ok. That’s when I let go of the brakes and finish the rest of my race. 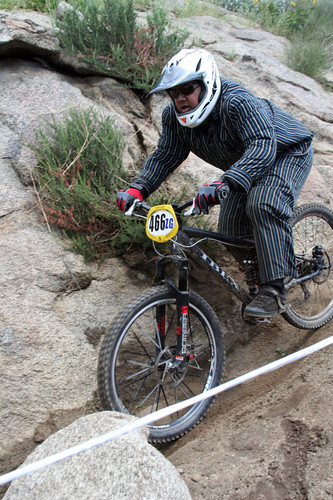 By the time I hit the wall, my legs were on fire. I sat down a few times and as soon as the burning went away, I stood up again to pedal hard. Eventually I even caught a glimpse of Kim who was just crossing the finish line. I pedaled as hard as I could…dead legs don’t move all that fast. I cross the finish with PJs and all! Woohoo! 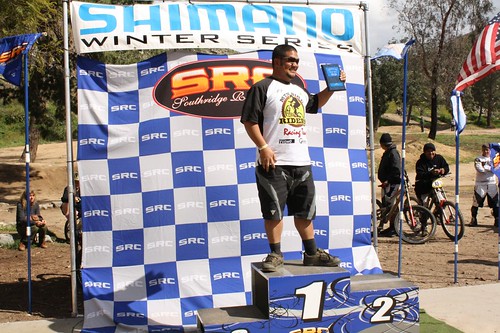 Dustin Hampton came in really fast, which meant I took 2nd this time. However, since I raced 5 out of the 6 events, I took home the overall champion award. I have never ever raced DH in my life. I had always talked about wanting to try DH, but never had a bike to do it with. What’s funny about this whole experience is the fact that I basically raced with an XC bike made by Ibex Bikes. The Ignition was close to an AM bike as you can get. The rear had about 4.5 inches of travel and the front about 5″. Joe let me borrow his Marzocchi fork which gave me a total of 6″ in the front to help absorb some of the crazy drops we experienced.

Some have told me that I may have done better on a longer travel bike. But if anyone knows me at all, I like to do with what I have. Besides I wasn’t willing to spend a grip of money on a DH bike…I have 3 kids that need my cash on a 24hour basis! Anyhow, I was rockin’ the Ibex through out the series and I have to tell you, this bike is one strong rig! I did have 3 problems that occurred through out the months of sessioning and racing. 1, the rear XC wheel came loose. On one training DH ride, the axle nuts came loose. It was quickly fixed with a set of cone wrenches. 2, rear triangle pivots came a bit loose from the same training ride. That was remedied by tightening them. 3, severe chain suck. On Saturday’s practice run, I hit a rock garden that bounced my chain off the middle ring, passed the granny and was wedged between the bottom bracket and the swing arm. I fixed that with an MRP chain guide the same evening. But overall, the bike lasted through months of abuse and this XC bike probably has seen more rough terrain than it was intended to.

I would like thank our awesome sponsors for supporting us throughout the races, Hoss MTB, Ergon USA, Evomo Clothing and BikeCommuters.com