So there I was riding my mountain bike through some wilderness that was known to be chock full of crazy and dangerous animals. Priscilla was TRYING to keep up with me on the trail and I often had to stop, then go back down the trail to check on her. 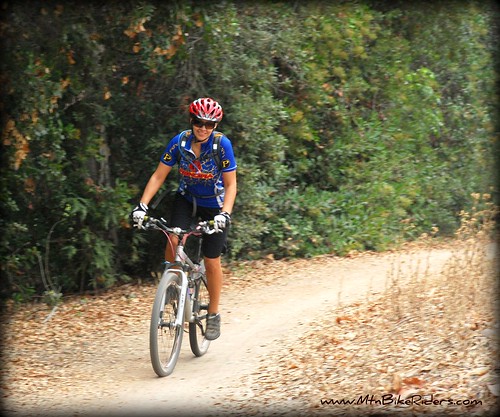 Then during a long climb that took us from 4400 feet up to 6700 feet, I spotted something ahead. It was a mountain lion. I said to myself, “ugh…not again…” I said this because the last time I encountered a mountain lion, it wasn’t good…for the lion. When I saw the lion, I wasn’t too concerned since I figured he would just run away. But this fella wasn’t budging. He actually came out of the brush and stood right in the middle of the trail. I stopped my bike, I motioned to Priscilla to stop right behind me and place her bike in front of her for added protection from the lion.

I locked eyes with the lion and said, “what’s up kitty…” he just looked at me, then he took an aggressive stance in which his head lowered, while taking 2 steps forward. He did this without breaking his cold stare.

I dismount my bike and took off my hydration pack, the kitty is slowly making it’s way closer. He and I are now only 20 feet away from each other. I take my sunglasses off and hand it to Priscilla. She tells me to be careful. But she should have said that to the kitty. I advance forward while taking my shirt off. When I did this, Priscilla says in a low tone…”oooh!”

Then with a blink of an eye, the kitty and I run towards each other! I’m yelling a battle cry, much like you’d see in the movie 300 or Gladiator. The lion does the same thing with its blood curdling roar! We jump up in the air, kinda like an old kung fu movie. We exchange punches in mid air, we land on the ground and I say to the kitty, “hmm, your kung fu is good, but NOT good enough!” Again we take to the air, but this time I’m on the attack, I throw a punch, he blocks, I kick, it hits him, he winces, I throw another punch, he goes down!

I land back on the ground, I wait for him to get up…”had enough kitty?” Then he says to me, “pssh, is that all you gots bro?!” Then he lunges, claws me, it cuts my forearm, I start to bleed. He laughs…I get mad and this time I’m going to use my specialty move to defeat the lion. I jump up in the air, then fly towards him, then I yell, “Pedal KICK!!!! HIYA!” I get him square on the jaw, he falls back to earth very discouraged. I yell to him, “let us be kitty (lions hate it when you call them kitty), or face the consequences!”

The lion retreats into the wilderness, Priscilla and I continue with our ride. By the way, she’s totally digging on me since I just saved her life. She kept saying something about how strong I am and yada yada yada.

We crest the peak of the mountain and we sit for a moment to enjoy the scenery. Then I hear some rustling in some near by bushes. A bear and a tiger come out…then guess who shows up behind them, yup, the lion. I look at them, and I sigh…”Are you serious? I beat you up, and now you come here with your back up?”

The lion starts to laugh and says…”its 3 against 1 bro…you’re out numbered!” I respond, “first of all, I ain’t your BRO! Secondly…KITTY (he’s visibly upset when I said that), I still take care of you three all by myself!” I motion to Priscilla to step away from the danger. I suggested that she get our picnic lunch ready as I will be super hunger after fighting these animals.

On this fight, I decided to stay on the bike, my KHS XCT 555. One would think that fighting while on a bike would hinder one’s abilities. But what these animals didn’t know was, that my XCT 555 was from Cybertron and could easily transform in to ANYTHING I ask it to.

The lion, tiger and bear start to surround me, one is on my left, the other on my right and the last, behind me. They yelled something to the effect of “Attack!” That’s when they all lunged at me, I do a super quick and high bunny hop 20 feet into the air, when I did this, all 3 of them end up running into each other and bonking their heads together. I land back to earth…laughing. The animals gather themselves and are now madder and want to really do some damage.

The tiger and bear attack and I see that the lion retreat into the bushes, I honestly thought he gave up. The bear jumps in the air, and is aiming to land his knee to my face, I jump out of the way, but the tiger grabs me and gives me a titty twister, I yell in pain (I hate those!). He starts laughing, then the bear throws a kick to my head, I some how block it with my leg, and I grabbed the tiger’s titty and give him a twist. He yells and in the process, he lets me go. I get back on my bike, I do another bunny hop into the sky. As I was leaping 50 feet up, I see Priscilla had nicely laid out our picnic blanket and was getting our lunch ready.

Both the tiger and bear follow me to the skies. Since I was hungry, I wanted to end this fight quickly. In mid air, I do a back flip with the bike, my rear wheel hits the bear right on the gut and the impact causes the bear to fly clear across the valley. Then when it came to fighting the tiger, I had my KHS XCT 555 transform into a pair of nun-chucks, I grab my bike, er, I mean the nun-chucks and whack the tiger into another mountain range.

I drop back down to the picnic area, and I noticed that Priscilla wasn’t there. I look to my left and saw that the kitty had Priscilla. He was holding her while he had his gun pointed at her temple. I look at the kitty and say, “dude…I wouldn’t do that if I were you…” He says to me, “oh yeah? What’s you gonna do about it BRO?!”

Priscilla says to the kitty, “He already said he ain’t your BRO!” At the end of her sentence she did some fancy kung fu move where she grabbed his gun, twisted his arm and at the same time she knees him to the face. The force of the knee knocks him out cold!

I run up to the kitty and I stand over him say….”oooh you got knocked the (BLEEP) out!!!” Kitty finally comes to, and runs away. Priscilla gives me a smile, I nod…and we both sit down and enjoy our picnic lunch.

My Visit to KHS Bicycles

8 thoughts on “Lions, Tigers and Bears, Oh My!”