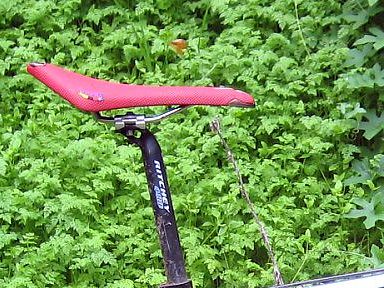 Red Selle Success RTM saddle stands out on the trails

Specs:
Elegance and attitude truly define the RTM saddle. The RTM sports a unique design that features a FLEX VENTILATION KEVLAR system, CARBON FIBER COMPOSITE shell, and TITANIUM rails. The unique saddle shell design and elegant styling combine to offer an amazing level of riding comfort not found on other saddles. All this available in a package that weighs a scant 170 grams for the Titanium rail model and at a price much less than other saddles offering similar features. Available in embroidered KEVLAR covering and either titanium, vanadium or chromoly rails.
Size – 300mm X 130mm
Full KEVLAR with Embroidery
Weight: Titanium Rail 170 +/- 5% grams
Weight: Vanadium Rail 180 +/- 5% grams
Weight: Chromoly Rail 230 +/- 5% grams

Testing Grounds:
All over the Southern California Trails, Sea Otter 2009 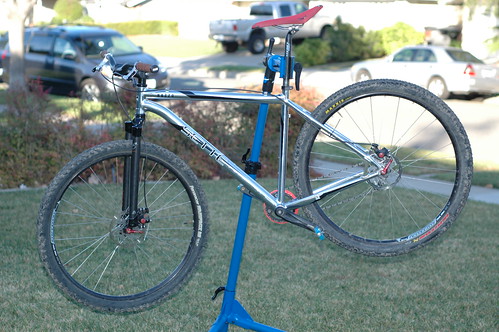 Putting the Selle Success RTM on the SS made sense: lightweight, and since I stand alot on the SS I gave my butt a bit of relief from the minimalist padding.

First Impressions:
Pretty and lightweight. The wings are different from the design I usually run which has more of a whale tail look. The red was a looker. I was definitely apprehensive using a saddle that ran 205 grams. The carbon under and titanium rails are a visual treat.

Strengths:
The Selle Success RTM was reasonably comfortable for the weight and the minimalist design. Many people think the copperish-colored piece of metal at the front of the saddle would be a cause for pain, but it never did for me. Overall, I wouldn’t call this saddle the most comfortable I’ve ever ridden, but it is comfortable enough. I’ve taken it on longer rides 4-ish hours and it did fine, but your milage may very.

The saddle held up well over the last few months of testing. The fabric still looks good, although the red is not as bright and vivid as it was when it first arrived. There is also a bit of fraying where the cloth meets the carbon fiber underlay, but other than that, the saddle looks good. 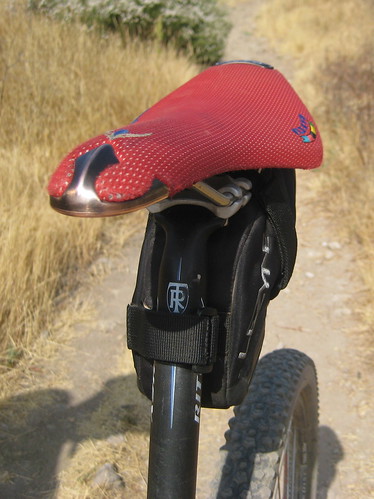 Copper colored metal piece up front was never a bother

The saddle is light and will get some looks and for the price, the Selle Success RTM is a bit of a steal if you’re a weight weenie. The weight to cost ratio is pretty reasonable. Many saddles at this weight are much higher priced.

Even though the saddle is a bit on the long side, I never had any issues getting off the back to weight my rear tire. I think that the saddle’s narrow width made it easier to push myself off the saddle and not have any issues when I did so. 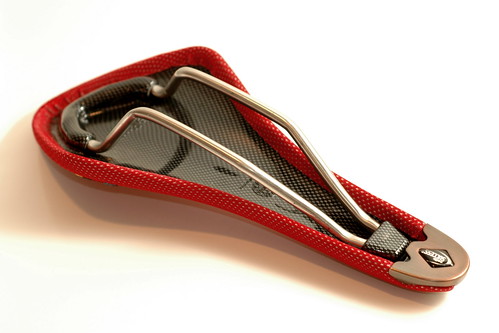 Carbon Fiber base is quite nice.

Weakness:
On install, the saddle had an issue with its rails. I installed the saddle on two different posts: Thomson Masterpiece and a Ritchey Pro. Both times, I had to squeeze the rails together to get them to fit onto the seatpost. This didn’t present itself as an issue during the actual testing of the saddle, but it was interesting that there would be such an issue like this.

Summary:
The Selle Success RTM is a reasonably comfortable saddle that delivers on stunning looks, lightweight and reasonable price. Saddles, in general, are a very subjective piece of equipment and as with most saddles the RTM does have a break in period but after that, this light weight saddle is down for big rides.

There isn’t much info on the Selle Success RTM, but you can click here to get to the website anyway.

Why do You Ride?

Way too hot to be riding…

Does it have pictures?