Editorial by David Sanderson, As Team MtnBikeRiders prepares for the Golden State Series Finale at Mammoth Mountain this coming weekend, we found that Kim’s report from race #3 had gone missing.  So I dug through the archives and found it. The following is Kim Finch’s race report from #3 of the Golden State series, better late than never…

Well, another trip to Fontana for the SRC racing Golden State Championship Series presented by Rock Shox. To say it was HOT is an understatement. We decided to do a late afternoon practice on Saturday and I got in a few runs and found the course very silty & soft. The G-out and off camber turn, I would have to say, was the hardest for me so I decided to take it slow and safe. I also had in the back of my mind the fact that the very next weekend I was racing X-C Nationals in Colorado. 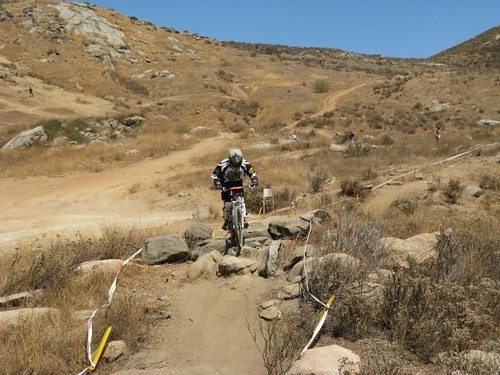 Practice was intense and I noticed even Moe had taken a few soil samples. We arrived Sunday to find most of the team already present. Tony was covering the camera shots and making sure my bike was good to go. 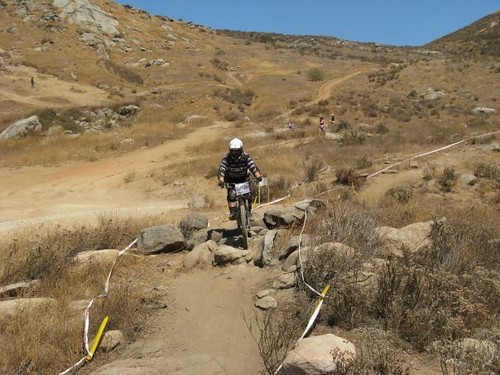 Got in a practice run to see if any changes had been made with Traci, my competition. The silty corner was worse then the day before and I expected it to be worse by my race run. Also there was the rock garden that was new to me on this course. I didn’t clear it the first time so made a couple more attempts at it to try to build the confidence. This race was a two run format which meant I got to torment myself twice in the same day! First run was clean on top and I was excited. I really would like this course if it had been during the winter series. Hit the G-Out pretty good and stayed low on the silty corner. Had to toe dab a couple of times but made it through. However once over the top I had the Pro line to hit the next section..This was not good for me. I stopped and realigned myself, I did not want to OTB on the first run or even the second run! Cleared the next couple of rock gardens but came to the last one before the straight away & I froze. I had to jump off and run down it. Now of course I was kicking myself about this act of being chicken. I cleared the remaining and lower rock garden even the little roller/dropper I have never liked all season. Went for a little rest and talking to myself the whole time about the jump off the bike trick and then back to the top for run number two. 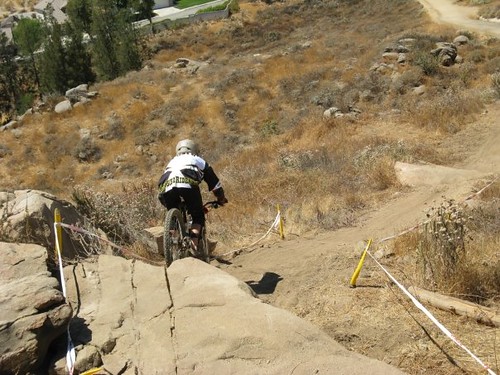 OK I am going to nail this! Started off clean, clearing the upper section and even the silt corner, popped up over the top and had my line! Now by this time team members & friends have lined themselves at the rock section I was still not confident on. I knew I could do it and told myself has I hear my name being yelled “off the brakes” “you can do it” “just do it”! So be it!! I did it! Adrenaline racing like crazy & exhausted, I race for the finish line! I cross to the happy faces of friends and David Buckle saying good job! I waited for Traci to cross and then hugs! She crashed but seemed OK! I took 1st place and was excited about it! I want to thank Tony for helping me with practice, bike tuning and just be there for me! I also want to give a big thanks to team sponsors, Evomo, Hoss, Serfas, Ice Toolz, Ergon and Sportlegs! Now it’s off to Colorado!

MtnBikeRiders.com Jerseys will soon be available for sale!

The Ford Taurus of Sea Otter