Editorial: A couple of weeks ago we did an altar call to summon the MtnBikeRiders.com Readership in an effort to bring back the beer reviews. After getting tons of emails from people that wanted me to help them with their rich uncle from Uganda, I finally found one email that read: “Please pick me! I’m a poet!” Well…being a sucker for poets that drink beer and mountain bike, I decided to talk to this fellow. To my surprise his last name was…ready for this…BEERIT! WHOA! Did he just tell me…”BEERIT” like Beer It? Oh My Fudgeylating GOSH! How appropriate was it to have a guy talk about BEER when his last name is BEERIT! Anyhow, below you’ll read Justin BEERit’s review of Budlight Lime.

Beer is good. I love beer. Even when it’s bad it’s still pretty…ah, who am I kidding? Beer is like cheese, it’s pretty awful when it’s bad. But, when it’s good—when it’s very, very good—beer can be up there with the best pleasures life provides. So, it was with excitement and eagerness that I responded to RL’s request for a beer reviewer for this site. It would allow me to combine three of my favorite things: mountain biking, writing, and (obviously) beer.

I suppose it would be appropriate to introduce myself a little. I live in Salt Lake City, Utah and mountain bike recreationally. Utah is great place for any and all sorts of outdoor activities, mountain biking included. As for beer, Utah certainly poses its own unique set of challenges (namely availability and cost) but they, like most challenges, can be circumvented (e.g. a trip to Evanston, WY or Wendover, NV). I try to get on the bike at least twice a week, weather permitting, but we recently adopted a one-year old girl and the transition to first time parents has placed occasional limitations on some of our previous freedoms. Even so, I make it a point to get out at least twice a week. As for Evanston or Wendover, well we try to make it out to either at least twice a year to stock up our reserves. (Keep this between us, though, as it’s still illegal to transport alcohol across state lines here….I know, I know, it’s bass ackwards here.)

Maybe now would be a good time to get into the beer review part? Fine. I fully expected for RL to say, “Thanks, but no thanks, Utahboy!” so I wasn’t quite prepared when he responded, “Let’s do this.” Between work and commuting and taking care of the little one and riding, I didn’t have time to stop off at the State Liquor Store (remind to talk about that particular Utah peculiarity at a later date) to pick up some righteous beer, so I opened my fridge to see what I might have at my disposal. 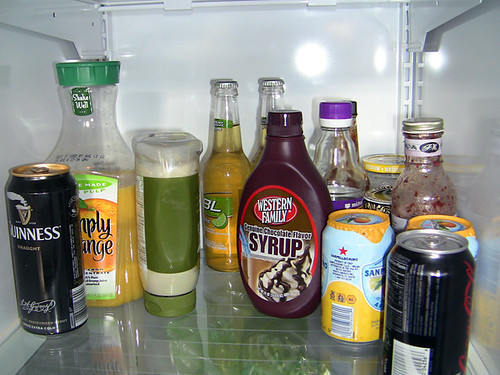 Dismal. Two Bud Lite Limes on the bottom shelf in the back (leftover from some long forgotten party) and a Guinness. Guinness is one of my favorite beers, so that’s definitely a way to go. But, I’ve never tried Bud Lite Lime before (hence it being relegated to the bottom back), and trying something new for this is kinda the point, ain’t it? Alrighty, it’s been settled. I will partake of the Bud Lite Lime and hope for the best. 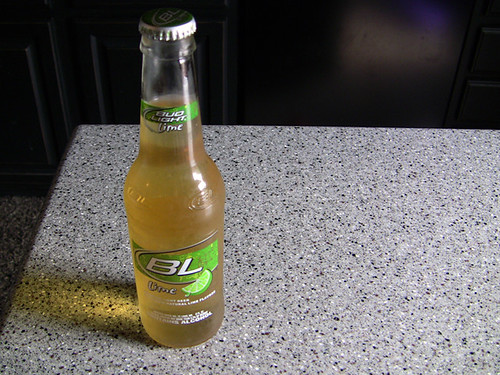 I closed my eyes and tried it. Not bad. I thought the lime flavor would be overpowering, but it’s really quite mellow. Tastes like a Bud Lite with the tiniest hint of lime. Refreshing.

In the meantime, as I let the flavors overtake me, what more can I say about myself? I am tall and skinny (6’5” and 175) but not the fit, muscular, zero body fat kind of tall and skinny. I’m the flabby, no muscle, angular, goofy, asthmatic kind. Whatever. It works for me. I’m über-handsome (just ask my wife, she’ll agree—I think), and I look exactly like John McEnroe. Really, the resemblance is uncanny. Often, people—strange people I don’t even know, or not-so-strange people I know very well, like my mother—feel compelled to approach me and say, “Do you know who you look like?”

They often pause for a second—because if I were older I probably would look a little like Hume Cronyn—then they say, “Kinda, but no. You look exactly like John McEnroe.”

“Yes,” they say. Then, “Who’s Patrick McEnroe? And, now that you mention it, if there were an actor from Cocoon you look most like, it would be Hume Cronyn.”

“You don’t say,” I say. “I would’ve guessed Steve Guttenberg.” Then we all laugh, because it’s pretty much a known fact that I am the Steve Guttenberg of mountain biking (or, for a more relevant reference: the Brendan Fraser) because I’m not really good at what I do and people wonder how the hell I got where I am with the talent I was given (i.e. How the hell did a lanky, flabby SOB like you make it up this hill without dying? answer—between heaving gasps: I didn’t…I died a thousand deaths, but I made it.). Hell, Steve Guttenberg is an apt description of just about everything I do: Work, check. Marriage, check. Fatherhood, check. Writing, well, you be the judge. (Hint: it rhymes with check.) I’m Steve Guttenberg-ing my way through life, one bumbling moment to the next.

Mmmmm…You know what? The more I drink this beer, the better it gets. Not sure if that’s a good sign, but it’s the truth. It’s probably not a good sign. Might have something to do with the fact that I don’t even notice the lime flavor anymore. I see on the bottle, near the bottom, that it reads in bold letters CONTAINS ALCOHOL. Good to know. I prefer my beer to contain alcohol, but perhaps that’s just me. Maybe this is the result of a lawsuit where someone got sloppy drunk after drinking a six-pack of the strange Bud Lite Limeade they found in the beer aisle of Food Lion. I mean, really, who could’ve guessed that it would’ve contained alcohol?

Anyway, a little known fact about Steve Guttenberg: He is a direct descendant of Skippy Guttenberg, the inventor of immovable type. It was after seeing this useless invention that his second-cousin Johannes Gutenberg got the idea for the far more important movable type.

But, enough about Steve Guttenberg (by the way, whatever happened to that guy? I’m still waiting for Police Academy 9 or Short Circuit 3), this is supposed to be a beer review, for crying out loud. The beer is fine. I opened up the second one and finished it, too. 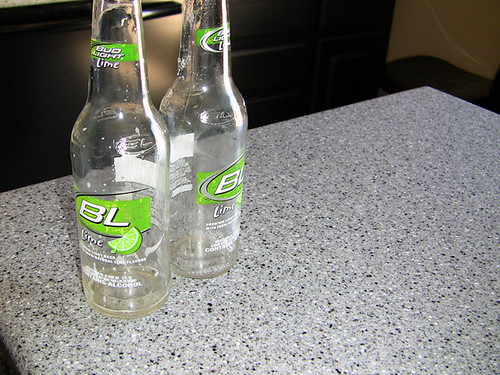 All told, they were better than I thought they would be. If I were on a beach somewhere instead of in Utah (or poolside in Vegas, even), I might have really enjoyed the beers—though that would be due less to the beers than to the setting.

That’s about it. I’m very excited about this opportunity. I love mountain biking, beer, and writing. I think I’m a fairly lucky guy to be able to combine the three. (Though, I wouldn’t recommend actually combining drinking and mountain biking in real life. Trust me, the two don’t mix, kids!) I promise to introduce you to far better beers than Bud Lite Lime in future reviews.

Something From Ibex Bikes

Mountain Biking Terms-“Pin it!” and “Get some!”