On September 24th, with the help of some good friends, I organized a lil’ guerrilla Super D Race in SoCal. We met up at a secret location where we all paid a $10 entry fee to be set aside for the winner’ pot. The way this was to work was, each rider would be released from the starting line and race down the mountain and who ever gets the best time, wins the pot.

But I also awarded top 3 with number plates that stated their place and Dirty Dog MTB was kind enough to donate 3 Reaper Stems for 1st-3rd.

24 hours prior to the event, I had about 15 RSVP’s. That morning I learned a few of them weren’t going to make it. 2 had legit reasons, one rider had Bronchitis, another broke his foot and some just didn’t bother showing up. Regardless, by race time, we had a total of 7 riders, which meant 1st place could easily earn $70! 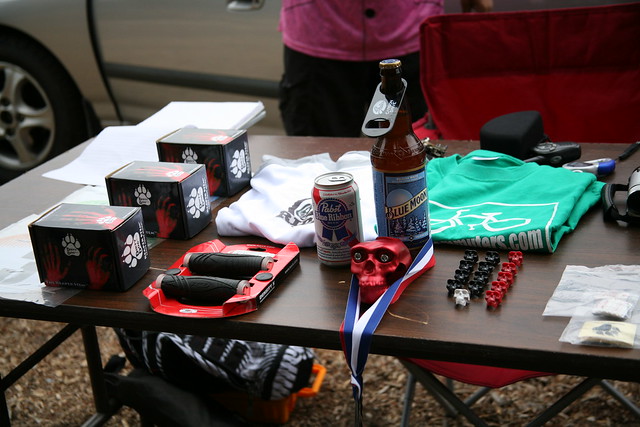 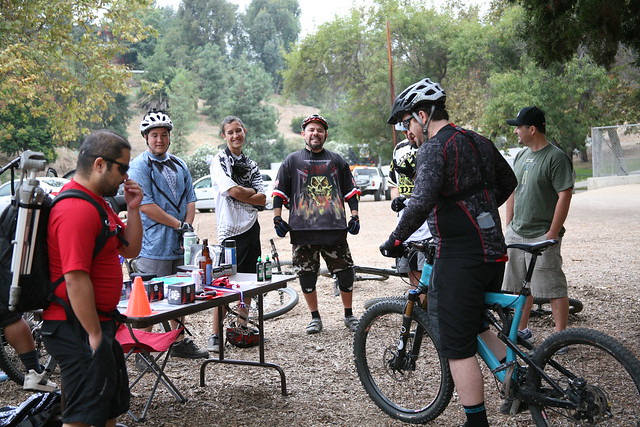 Watch this video to get an idea on the results. Thanks to Khoa N. for the photos and videos!

As much fun as the race was, the festivities began once we started doing awards. 1st place went to Dan Burdett, 2nd yours truly, RL Policar and 3rd was to Nick DiBlasi. This photo is our awards ceremony. We had enough schwag and beer to pass out so we decided to go 5 deep. You’re probably wondering why the rest of us are some what squatting, well its because we didn’t have an actual podium, so based on our places, we lowered ourselves to make sure Dan was number 1! 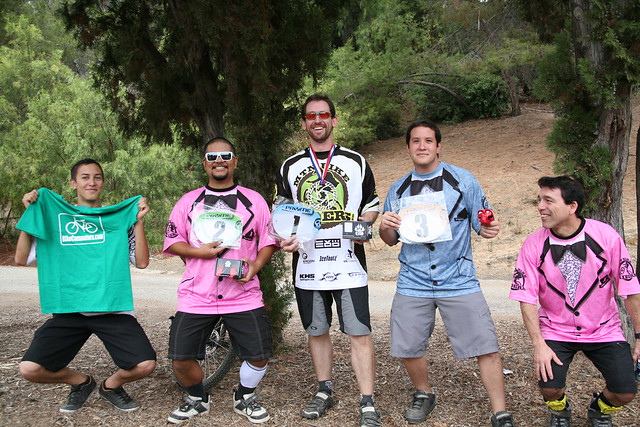 For the raffle, everyone who was there, racing or not got a ticket. We gave away some beer, water bottles, jerseys, t-shirts, tubes and lubes. 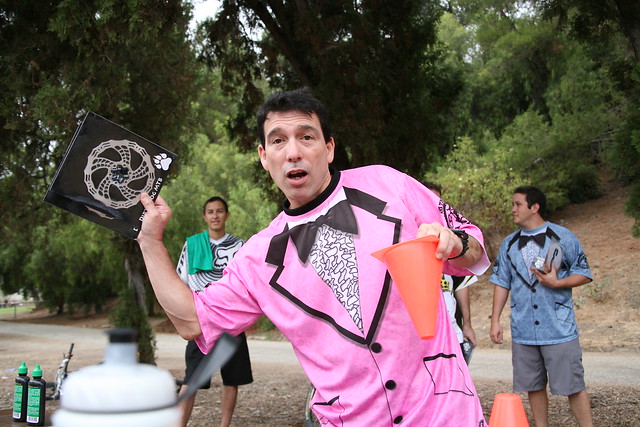 Here’s one of my favorite photos of the day, this is Pablo and Dustin. I brought out my tandem in hopes Artie and I could race with it, but since he’s never been on a tandem before, we decided to set it aside. What’s funny was, Dustin comes up to me and says, “RL, can Pablo and I try out your tandem? Riding one has been one of our fantasies…” How could I say no to that. So off they went! 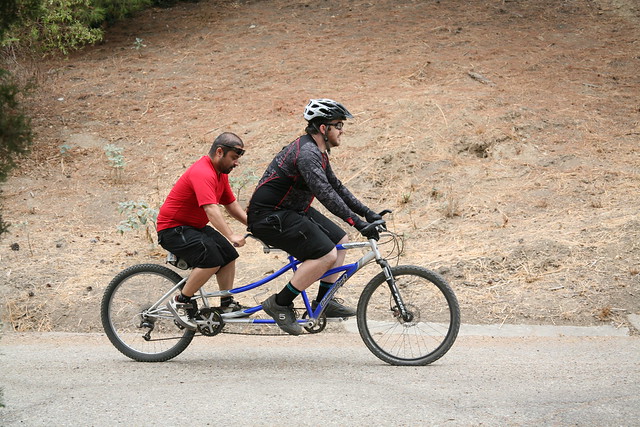 This photo looks really wrong…its like Broke Back wrong… 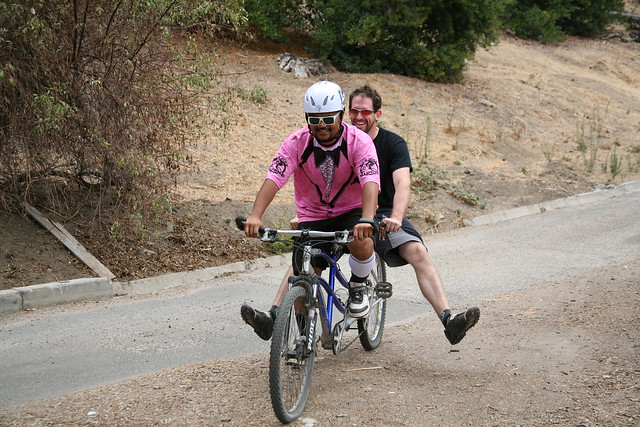 But here’s a photo Artie and I couldn’t resist getting, 2 guys on a tandem wearing pink tuxedos…I know what you’re thinking, “wow those guys are so masculine.” Yes we are and thank you! 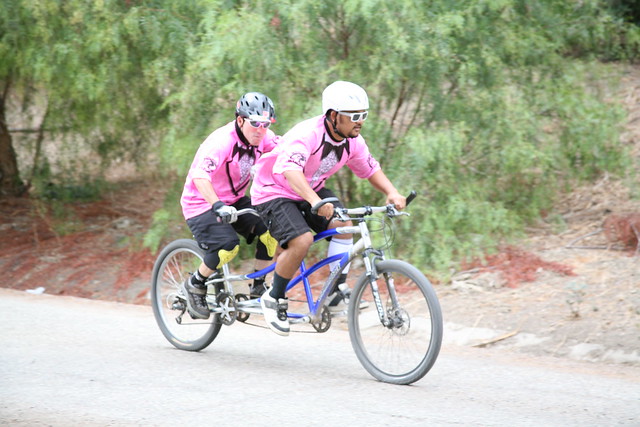 Ok but here’s something more disturbing. Dianese donated a spine protector for the first place winner. So Dan decided he’d try it on to see if it fits. 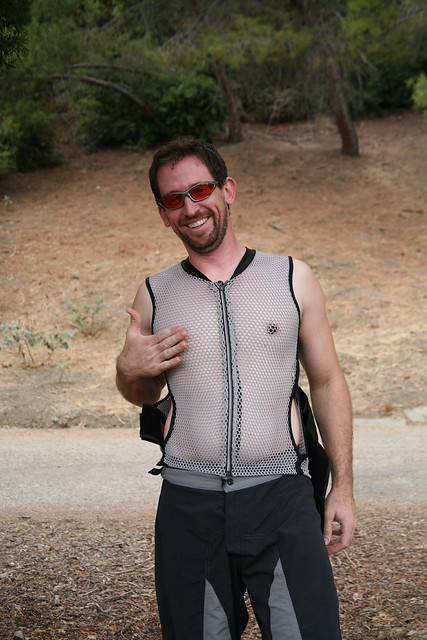 Then it just went south after that…people really need to remember that if someone takes a picture, it will end up on the Internet…haha 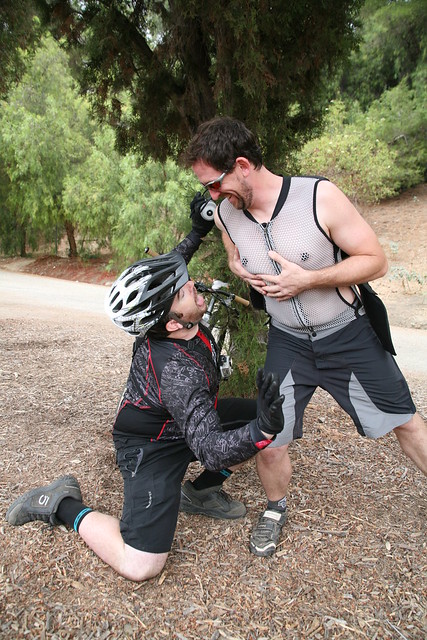 A big thanks to all those that helped out and showed up to the event. Dirty Dog MTB are the coolest people in the world! BikeCommuters.com for the stuff you guys donated and to the folks that didn’t make it or are interested in joining us in a future Super D Duper event. I’ll be organizing a Triple Crown Series in which we will the Super D Duper Battle Jam! Each race will have a different venue and each participant can earn points towards the overall series and the rider with the most can win the pot from all 3 races, sounds fun don’t it?!