Our recent beer review from our friend Rick Nicholson brings us a season appropriate beverage that is just in time for Halloween.

Ahhh, that time of the year is slowly approaching and how appropriate it is that Newcastle has released Werewolf Blood Red Ale as part of their seasonal brew lineup, and just in time for Halloween.
The brewers of Newcastle Brown Ale have collaborated with Caledonian Brewery, a famous Scottish brewery, to create in a most traditional way, a new, limited-edition ale for the fall. Newcastle Werewolf hit shelves and watering holes in September, and is brewed with a rye malt. Caledonian Brewery began back in 1869 and is one of the few remaining breweries to still use traditional fired coppers to boil their wort for fermentation. Newcastle and Caledonian had also worked together in 2009 to produce Newcastle Summer Ale.

Upon the pour, I noticed that the head remained through much of the drinking process and laced nicely along the inside of the glass. Even though there is the title of ‘Blood Red Ale’, I sensed a more subdued hue giving less to a Red than to that of Amber.

The first whiff of Werewolf is of mellow roasted malt with a suggestion of berries. On the palate you get a sweet malt flavor along with those berries before finishing with a clean hoppy bitterness that is quite agreeable. The ale is reasonably carbonated unlike the Brown Ale, which is more moderate. I found this brew to be easy to drink, which can lead to some dangerous shenanigans I must say.

I am still a fan of Newcastle’s Brown Ale but Werewolf remains unique enough to stand on its own. Continuing with its lines of limited editions, a debut for the Winter IPA will be, (when else?), this winter, and in the following spring, Founder’s Ale will make an appearance

My food recommendations for Werewolf would be a venison based chili with enough spice to make you howl at the moon. I can almost feel the hair growing on my back and on the palms of my hands already. 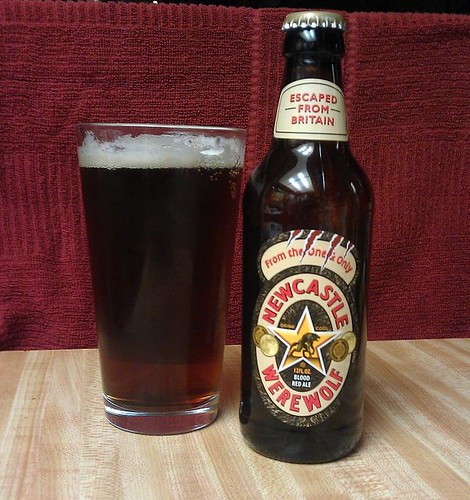