I was out of town this week for work, and when I came home I had package waiting for me from Airborne Bicycles.

I was planning on meeting up with RL and several other riders first thing Saturday morning for a ride at Whiting Ranch, so I spent some time to get the Goblin assembled and ready for a ride the next day. For those of you out there who have never built a bike, here’s a quick look at how the bike came, and how much assembly was actually required. I took pictures of each part as I unwrapped it and it came out of the box. Upon opening the box, the wheels were on top and the first thing to come out.

As you can seen the the photo, the ends of each hubs had plastic guards to prevent them from damaging any other components in the box during shipping. The wheels were also zip-tied together to prevent any unnecessary movement while still in the box. The wheels are equipped with SRAM’s new 10-speed cassette. This is the number one thing I have been looking forward to about this frame is being able to spend some extended time with the 2×10 system. I have demo’d it before on several other frames, but only a ride here and there. The wheels both have 160mm Avid rotors. Having removed all of the protective packaging, I set the wheels aside for later.

Individually wrapped were a few smaller components such as the skewers and the saddle, already mounted to the seat-post.

The last and largest part left in the packing was the frame itself. This was definitely the longest part of the unpackaging process in that there was lots small pieces of wrapping attached to the frame. Each tube has its own wrapping to protect it from damage. The frame in its entirety was also attached to cardboard supports in the box to keep it from moving during shipment. The frame already had the fork, bottom bracket, cranks, headset, stem, seat clamp, grips and brakes installed as well as the the derailleurs mostly installed. The rear derailleur still need to be attached to the frame, but all the cables and hydraulic lines were already run and in place.

I attached the rear derailleur to the frame and straighten/aligned the front fork and the stem. While the stem was already install the bars were in installed on the stem, so the stem needed to be opened up to put the bars in place. Next the skewers needed to be placed in the wheels, so the wheels could be set into the frame. Once the skewers where in place, the protect plastic parts to keep the brake caliber from compressing needed to be removed. Once that was done the wheels were ready to be installed. FYI- Be very aware when seating your wheel that they are fully recessed into the dropouts. Losing a wheel while riding really sucks!

With the wheels installed that left the saddle and drive-rain as remaining parts in the box to be installed. I took a quick stab at the estimated saddle height and tightened down the collar. Then I completely removed the chain from the frame and wrapped it around the two largest cogs to confirm it was the appropriate length. I ended up taking a couple of links out. Once the chain was installed the rear derailleur needed to be adjusted. The only must have tool to put the bike together was really just my allen-wrench set. Two things that are not included in the box, were pedals and a water bottle cage. I stole those parts off another bike. I made some adjustment to cockpit of the Goblin to make it ready for me to ride. I moved the brake levers to the inside of the shifter and also moved both the shifters and levers much further in toward the center of the bars so that the brake lever is position so that I can brake with solely the index finger. I tend to do all of my shifting with my thumbs, and positioned the shifters accordingly as well. After spinning around in front of my house the final adjust I made was to the position of the saddle by sliding it futher back, away from the bars.

The Goblin was now ready for it first time in the dirt!

The full specifications and geometry for the Goblin can be found here on Airborne’s site. Stay tuned for for more pics and info on the Airborne Goblin! 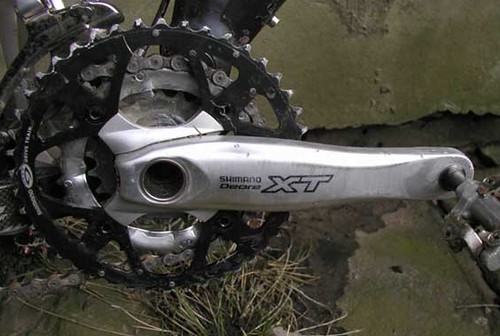 Goodie but oldie, should I get it used or brand new?

As I gather parts for my frame build up I continually have to address the question: should I buy used or should I buy new? Unless you have an unlimited budget I’m sure you’ve probably asked yourself the same question.

Much of this answer will be determined by how much your build budget will allow and what level, or weight, you’re hoping to achieve. In my situation the bike I’m building up is a full suspension 29er and my budget is “really small” while also shooting for durable, weight conscious (not weight weenie) bike.

Sounds like an oxymoron right? Finding parts that are durable and weight conscious but are light on the budget are typically not compatible features in bike parts. But, I think it can be done or maybe I just hope it can be done. To help along this process, I had to consider buying used equipment. But what should I buy used and what should I buy new? 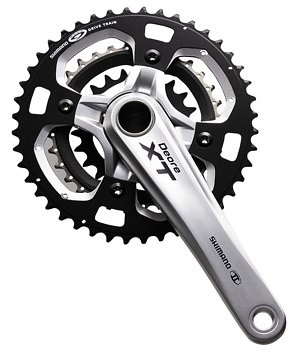 Durable and weight conscious, too bad it’s not cheap

For some advice on this, I turned to a friend who enjoys shopping for bike parts and asked for his thoughts. His rule for his bikes, of which he has many, is that drivetrain stuff like cranks/cassette/chain should be purchased new as to avoid weird wear patterns from prior usage. Control stuff like handlebars, stems, saddle, seatpost, can be bought used as long as they’re not too used.

Practical advice. Another piece of advice that I’ve learned is to be patient. A major factor I have on my side is time. I am not in a rush to build this bike up because I have access to other bikes. This gives me the option to wait for great deals to come along or to search the classifieds. 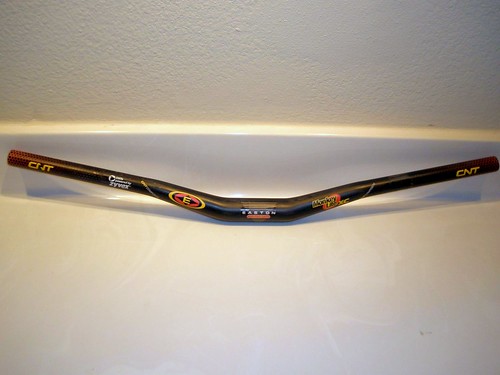 Score! Time permitted me to wait and I was able to nab this for cheap!

Having time allowed me to score a great deal on some gently used Easton Monkey Lite XC bars. Initially I had set my sites on any brand’s high end aluminum handlebars as this fit my “durable and weight conscious but also wallet friendly” budget. I figured that a manufacturer’s top of the line aluminum bars would be light weight and durable but not as expensive as carbon fiber bars. However, since I had time I was also keeping my eyes peeled on the used market which turned out pretty well, if I say so myself.

In the case of these bars I was able to achieve all of the parameters previously outlined for the build. Will this happen for all the bike parts? Probably not. But a man can hope, right?

It’s been a while since we’ve mentioned anything about our bike project. Well here’s an update.

We received some nice goodies in the past few months so I wanted to show just how the bike is coming along.

This is the bike with some of the bare necessities. Fork, wheels bars and headset. 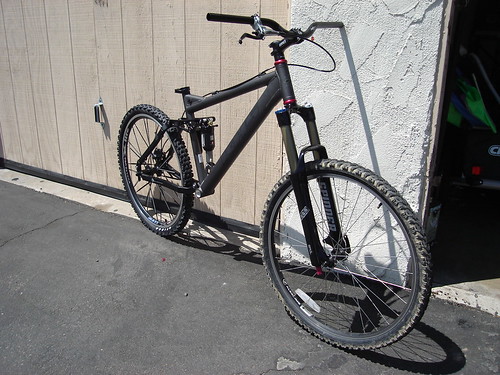 These are the Vuelta Wheelset that we received a few weeks ago. Unfortunately the front wheel will not fit the Spinner Cargo since it is a 20mm thru axle. I’m working with Spinner to see if they can send us the 20mm Cargo fork instead. 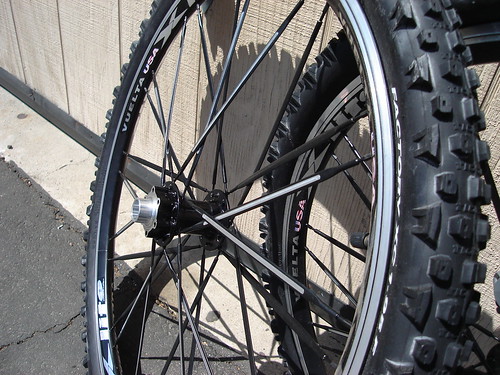 Check out the bladed spokes on the Vuelta wheels. 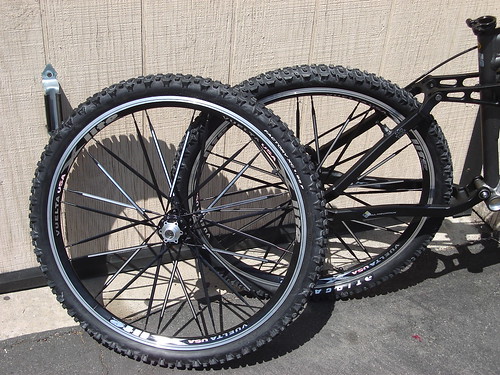 Did you notice the bottom bracket clearance? Now that right there can clear some logs!

We’re still waiting on a few parts, but other than that all we we really need is the drive train. If you have any questions about this project or you’re a company that wants to contribute to this project, feel free to contact us: HERE.