I met the reps of POC at Interbike 2008. New products for 2009 from this Swedish company and makers of snow/ski products are BIKE gear. To be more specific – gear that would cater to the extreme side of bikes, such as Downhill (DH), Freeriding, park and BMX. For our testing we received body armor (Bone Leg and Bone Arm) and the Cortex helmet (previously featured by RL). 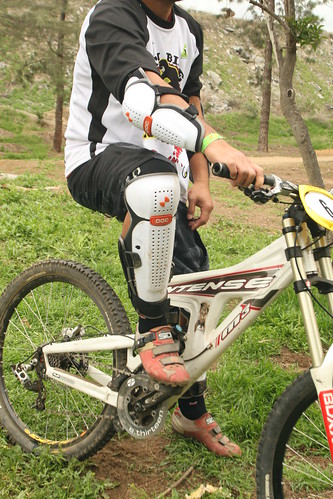 These pads come in a cool color of white with their logo in orange. Below is the description from POC.

Bone Leg:
A knee/shin guard with shields made of sturdy Polypropylene and the inside of highly ventilated comfort lining. The top piece protecting your knee is made of VPD. Fit and mobility is crucial, without sacrificing protection. We have seen many products not doing their job. Long hours have been spent to develop the best possible ergonomics and fastening solutions and we succeeded. The Bone Leg comes with a detachable calf protector, saving you from blood spill when your pedal hits you from behind.

Bone Arm:
The Bone Arm is an elbow guard divided in three segments providing extraordinary fit and protection. The construction is alike the Bone Leg, where special attention has been paid to protect the joints.

I’ve had a chance to wear these armor on several downhill races such as the Vail Lake Hillbilly DH Challenge and a few of the Shimano Winter Series. 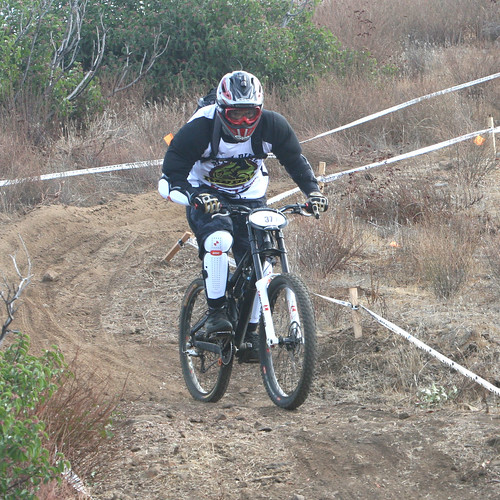 By far these pads have been the most comfortable I’ve tried. I’ve even worn them over leggings and thermals and didnt feel bound.  Fortunately for me I didn’t have to find out whether the construction was solid enough to keep me from getting scuffed up.  I’ll be wearing these to other DH races for the rest of 2009. Check back for an updated review.

POC Bone Leg and Arm are definitely an A+ on the looks and comfort.  For more information, please visit www.pocski.com.

WOOdman Components sent us their Axis SL COMP headset.  This is a lightweight headset made out of a CNC-machined 6061 T6 aluminum. 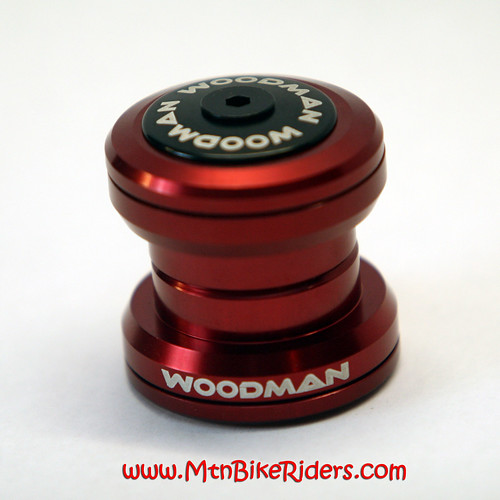 Additional features for the Axis headsets: 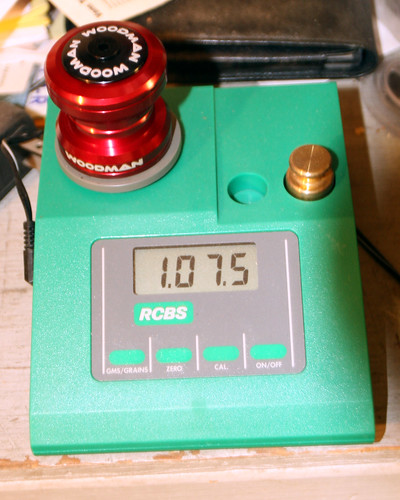 Claimed weight is 117 grams, however on my scale at home it weighed in at 107.5 grams (even better).

I visited the WOOdman booth at Interbike.  They certainly have a fine line of components.  I’ll be installing this onto my Rigid Single Speed project (details to come).  For more information visit their site at www.woodmancomponents.com.

At Interbike we met with YESS.  Other than the unit RL featured last month, the ETR-B, they also provided us with their new ETR-D tensioner for full suspension bikes. 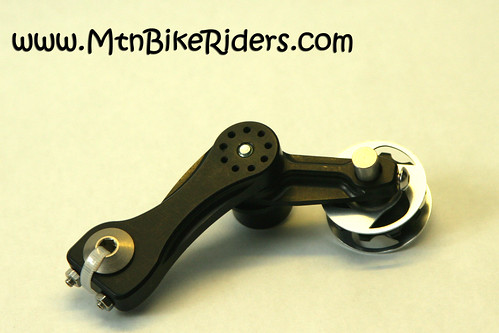 February of this year I converted my Intense Tracer into a full suspension single speed bike.  A Key part of my conversion was the YESS chain tensioner, model ETR-V. Since then I’ve had many rides and racked up many miles on this unit. 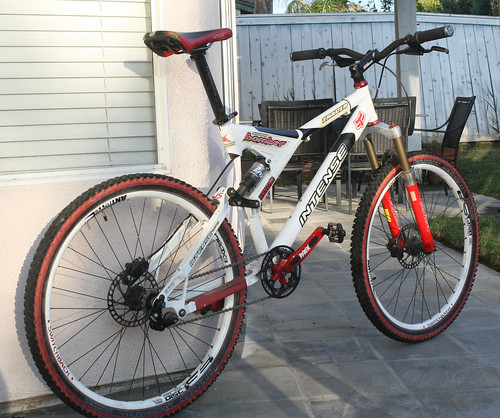 The ETR-V has worked perfectly (as it’s supposed to) and held up well. One flaw I thought was the ETR-V was not truly compatible with the older Horst-link design.  I recall during my conversion having one difficulty with the installation.  The arm on the ETR-V was hitting the Horst-link & chainstay of my Tracer.  This posed to be a problem until I made several adjustments.  I moved the arm down into several holes (of the joint) until it was no longer hitting the chainstay.  Although it appeared clearance free, often times under compression I would find that the small nut would get stuck or lodged into the Horst link.  This eventually created a dent into the chainstay where it no longer gets stuck. 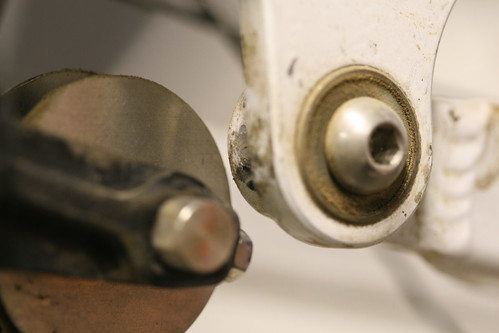 You can see the dent on the inner arm of the chainstay where the nut would make contact.

This new model, ETR-D, will replace the one that I had installed.  Main difference is the original attached through the axle where this new model will attach onto the derailleur hanger.  Much better I think, dropping the arm lower where it will have enough clearance to avoid contact into the Horst link. 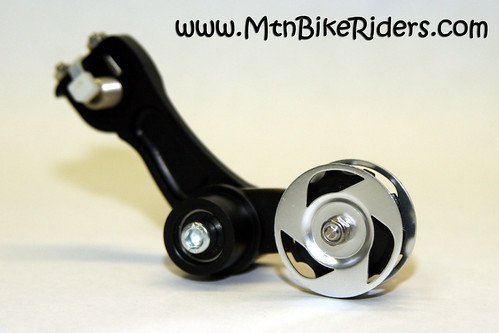 ETR-D, inside view.
Description from Yess:

Designed for Full Suspension Mountain bikes using various Axle sizes. This tensioner will also allow removal of wheel without interrupting the tensioner mount. Installed onto the derailleur hanger and locked into place with two setscrews, this is all you need to convert your full suspension frame into singlespeed.

I’ll be posting a follow-up report soon after I have installed the new ETR-D. Stay tuned. For more information, log onto www.yesspro.com

New from OURY is the color RED lock-on grips.  They’ve had a lock-on grip in their product line, however it was just limited to one color – black.  New for 2009 is a red grip coupled with the ODI Lock Jaw clamps. 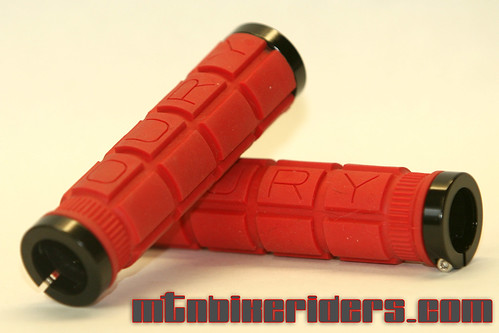 I’ve been a fan of OURY grips for many years.  I’ve used their regular Mountain Grip on several of my bikes as well as the black lock-on grips on my DH bike.  I have to say first hand from experience – they are comfortable! 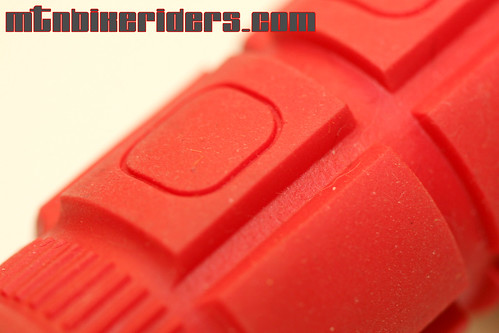 Check out these huge pads! Comfort for your hands…

Here is a description from OURY:

Per my conversation with OURY at Interbike, they will come out with a new color each year;  however only for a limited time.  So once they run out of RED… that’s it.  Go get ’em while supplies last.  For more information visit www.ourygrips.com

While at Interbike, we met up with FRS Healthy Energy. They provided us a pack of the Soft Chews.

As they explained to us all the bells and whistles of the product, I was really intrigued because one key thing he mentioned was that it did not make you jittery like other energy products such as Redbull or Monster.

The suggested serving for the soft chews are 2 at a time. The chews remind me of Starburst candies and its just as good too. 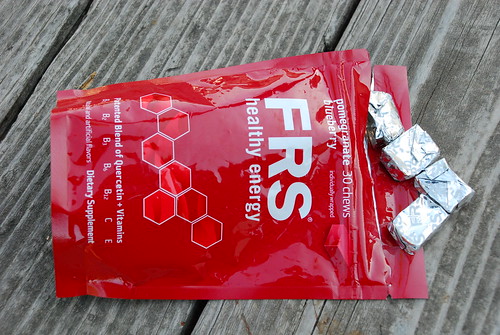 So here’s what happens once you eat the chews. Within minutes…yes minutes, you start to feel this stuff working. Like I mentioned, FRS said this doesn’t get you jittery. But I definitely felt it slowly working. 45 minutes later, they still have an effect on you.

Apparently FRS is made out of some crazy anti-oxidants that are found in items like red onions, blueberries, raspberries and pomegranate. It also has a boat load of B Vitamins: 1,2,3,6,12 as well as Vitamins C and E.

FRS claims that their product will last in your bloodstream up to 16 hours, which is crazy considering caffeine only stays in your body around 3-4 hours. Since they made this crazy claim, I asked FRS will this prevent me from falling asleep at night? The rep said no, you could actually go to bet after taking this product. There’s some truth to that since I have been popping the chews on our night rights that last about 1.5 hours and after that, I’m bed within another hour. 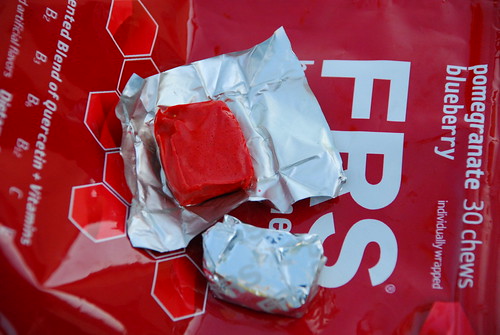 You’re wondering has this helped with my riding? I say heck yeah! FRS helped me get in some of my best timed single speed rides. Usually when I ride the Fullerton Loop on my SS, I stop at the top of each hill, rest and then keep going. Sometimes a ride at that pace can take up to 2 hours. But in my last 3 SS rides, I took some FRS chews and was able to go non-stop through the trail in about an hour and six minutes. I know that there are some guys that can do this trail way faster, but for me, that was the fastest I’ve ridden the Loop. So I guess you could say FRS helped me achieve my personal best.

You can order FRS products from their website, the chews are on the pricey side, its $20 for a pack of 30 pieces. But you know what, I think its worth it since this product DOES WORK!

At Interbike I received the new super wide Torsion BFD (Bighit Freeride Downhill) handlebars and the new B52 stem for review.  For the bars, the model I have is a low 20mm rise and super wide 800mm!

Based on its description, it is perfect for Freeride / Downhill.  However with its length, this can be well suited for a Single Speed.  With its wide build, this bar would be perfect for sawing back and forth when hammering up the hill. 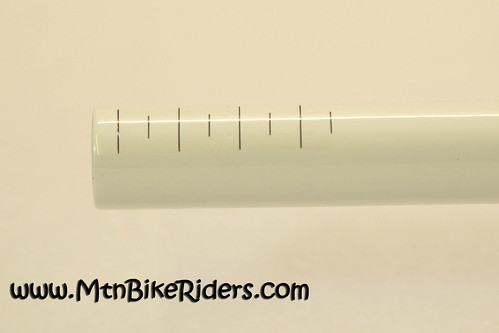 800mm is stock but has lines for shortening/cutting the bars which will accommodate from 680mm to 800mm length.

The stem is a 65mm, 200g in shotpeen white paint.  This stem looks bomb proof! 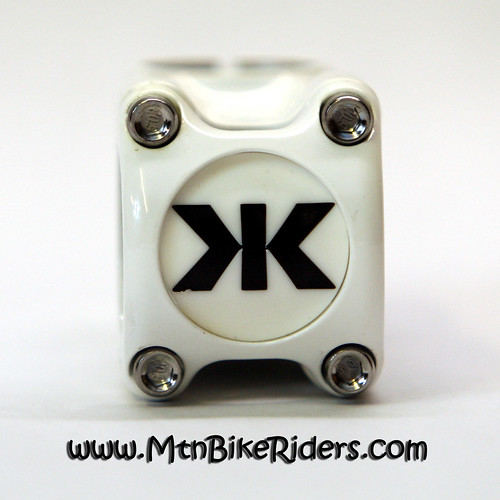 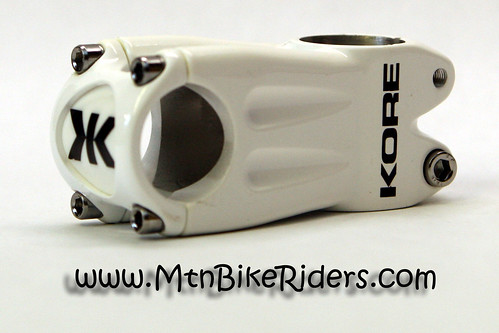 I love the white paint job! It just has sleek written all over it.   I’ll be swapping out my DH bars on my Intense Socom DH bike and replace with the Torsion bars.  The color will definitely match my bike!  Look for a full review in the near future. There’s a chance these may go on my SS build as well.  I’ll keep you all posted. 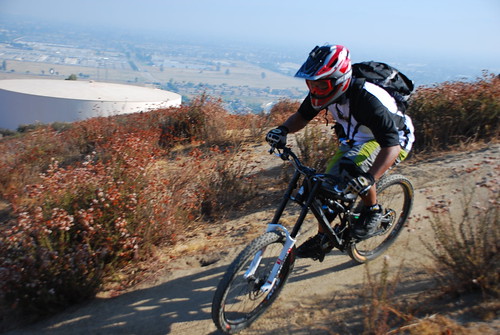 While we were waiting to do an interview with a company, I started filming us and even translated for Joe since his EngRish isn’t all that swell. Eh…I bet you didn’t know that I was bilingual…just watch the Masta in action.

Zoic offers both mountain and commuter clothing. Ashley shows off their new collection.

Andrew Ibanez talks about the 2009 offerings from Cygolite.

Syndicate Riders, Rennie and Peat tells the world what they really think of RL Policar.