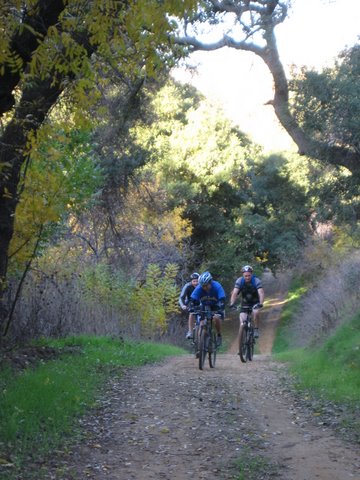 I always find the first ride for a new mountain biker to be a bit of a conundrum: the trail I choose has to be easy enough for the newb but hard enough to be a challenge mentally and physically. Too easy for the newbie and the rider loses interest. Too hard and the newbie never comes back. WAY too hard and the newbie warns other potential newbs to not even try it. It is always a fine line determining which trail will illicit the right response, that being: I want to mountain bike again!

What I have figured out, through trial and error, is that the Fullerton Loop is not a good trail for the first timer. Over the past year I have taken two friends new to mountain biking to the loop as their first excursion on dirt and well, they have not ridden a mountain bike since then. Aerobically, they are both in good shape. The first enjoys half marathons and the second hits the gym and the basketball courts on a regular basis. They were challenged physically which is always a goal. Mentally though, the descents on the Fullerton Loop, intimidated them to the point of no return. 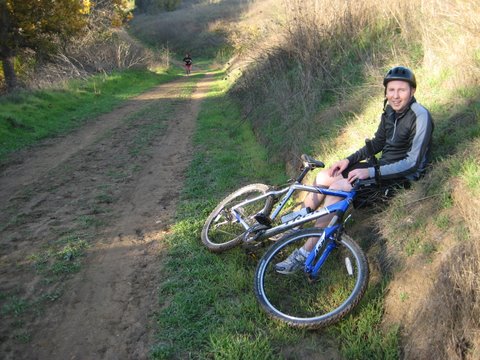 Personally, I think you should feel like puking on your first mountain bike ride

On my first mountain bike ride I went out on the Fullerton loop solo (no mountain biking friends when I started out) with little more than a print out of directions from the website efgh.com, thanks Mr. Erdelsky. I remember being tentative on the downhills but I did not find them to be overwhelming. I was never scared for my life but I did find myself gasping for air after just four miles. This assessment of my first ride has influenced my decision to bring new riders to the loop. My thought process is that if the newb is in decent shape they should be fine on the loop. However, I vastly underestimated the lasting mental effects of getting scared out of your mind on the loop’s descents.

OK, so after thinking about these issues for a while, I decided to take my friend Adam, new to mountain biking, on the most tame trail I could conceive of while still barely being a “mountain biking” trail. Telegraph Canyon in Chino Hills State Park is very mellow, so much that I have hiked a good portion of it with my 3 year old son. Adam and I met up with a couple of roadies posing as mountain bikers: Leo and Leo’s friend (yes, I suck with names) and we took the 12 mile out and back at a very newbie friendly pace. Adam even made it all the way to the turn around point and only once felt as if he wanted to hurl. Pretty good, huh?

Whats even better is that Adam is ready to hit the loop now. He said so both verbally right after the ride and in an email sent a few weeks later. He is waiting for his new helmet to arrive via brown Santa and we’ll be tackling the Fullerton loop next. Success!

As the subject of being a newbie came up this week. I dug through some archives of the days that Moe, myself and a handful of guys we ride with started a little riding club called TEAM ZOOM. We were weekend warriors that thought the Fullerton Loop was a difficult trail. Well, when you’re a newbie…any trail was. So I found some old clips of us going down a hill…

Priscilla and I got a great laugh seeing old videos, what’s even funnier is to see us do that and now participating in downhill racing….Anyhow, I remember those days riding with our friends, some of the best times I had on my bike.