“What?” you say, “are you talking about”, Smud, what’s a Smud. Let me tell you. Being the semi weight weenie that I am, I have been looking for a lighter seatpost for my Trek fuel ex. Until now I have been unable to find one that satisfied my requirements, that being light weight and reasonably priced. My biggest problem was the size requirement, I needed a 40.0! 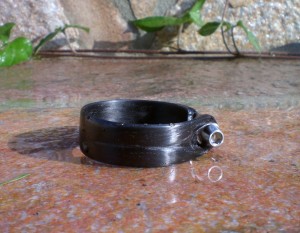 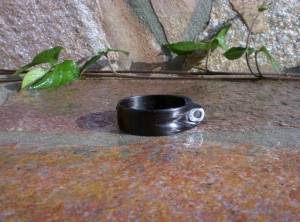 While cruising my daily bike and auto forums, I came across a thread about something I don’t remember. It all ended good as Smud-Carbon, out of Poland, had posted and I reached out to them. Their website, www.smud-carbon.eu, does not have much but what it does has is tasty good. I e-mailed them about making me a carbon seatpost clamp with titanium bolt to my size requirements, they responded and a few weeks later, I had it. Fits perfectly and holds my post! Enjoy the pics. 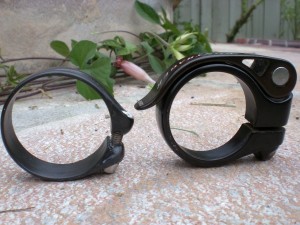 Check out their website and shoot them an e-mail. Even though they are a half a world away, excellent customer service! I have e-mailed them about a couple of other items, I’ll let you know how it goes.

… this time sans pads and while I was at it, sans shoes and socks as well. Let me explain.

It all started with a quest to find a seatpost clamp with a quick release. I had been looking for one for the Redline Mono 9 for a while now. Since I was going to buy one I decided to buy one in the color I wanted, red. I originally guessed at the diameter and purchased one from Hope. Oops, wrong size. Stupid of me not to measure it so I took the bike to my LBS and had it measured. 30.6mm. Hope doesn’t make a 30.6mm seatpost clamp so I purchased a Salsa version instead.

I received the gorgeous seatpost clamp yesterday and tried putting it on… but it was too big. Sweaty and frustrated, I put on the old non quick release seatpost clamp. I torqued it down quite a bit (I’m a big rider, k?) and SNAP! The bolt broke inside the clamp. Ugh. I wasn’t able to pull out the bolt and I didn’t have another seatpost clamp so I had to go with a different bike.

Really frustrated now, late to the ride and at my whits end as to what to do about getting the right sized seatpost clamp, I grabbed another bike, threw it on the rack and raced out to the trailhead. I got there, pulled the bike off the rack and realized that I forgotten my socks. OK, not bad. I can still ride. Then I realized I forgot my shoes too. Double Ugh. I guess I’ll just have to wear my sandals.

Off we went. We turned on our lights just before we arrived at the first downhill. On that first downhill I decided to fall… hard. I rolled around, scraped up my left arm, knee, leg and foot. The foot got the worst of it (if I had only brought my shoes!). After a quick check I noticed that one gash on my foot was relatively deep and wide. I decided that I should probably have it seen by the doctor.

RL, Priscilla & I rode back to the trailhead. I then proceeded to drive to the hospital. When I got there the doctor told me that the hole in my foot was too wide to stitch up. Yuck. All the rest were of my wounds were superficial skin scrapes which I suspected. Here is what I look like after being bandaged: 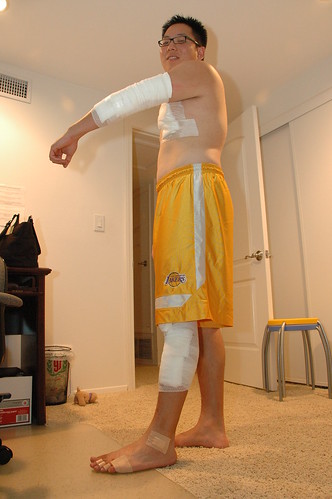 RL has a picture of that hole on my foot on his camera somewhere. I’m sure he’ll be more then happy to post it in the comments section later on.

Moral of the story: buy the right sized seatpost clamp the first time.