Turns out the Geax AKA 29 tire that comes with the Airborne Goblin is Ghetto Tubeless Compatible. If you don’t know what Ghetto Tubeless is. CLICK HERE to learn about it. Or just watch this video that we made a while back.

Here’s the tire after the liner and Stan’s has been put in place. It’s holding in air real nice! 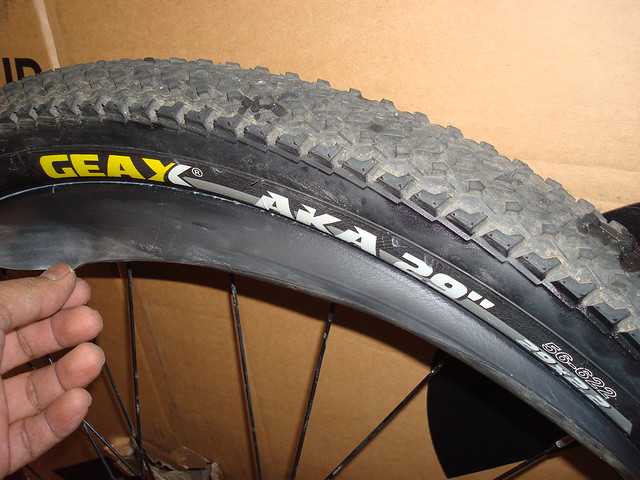 Once I knew the tire sealed up, then it was time to cut off the excess tube. 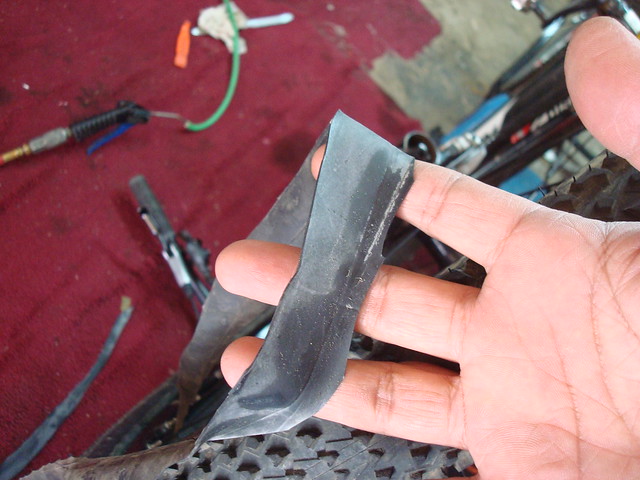 Voila! All done! I’ve only done the front wheel and that took me about 20 minutes to complete. I plan on test riding this set up before I change over the rear wheel. 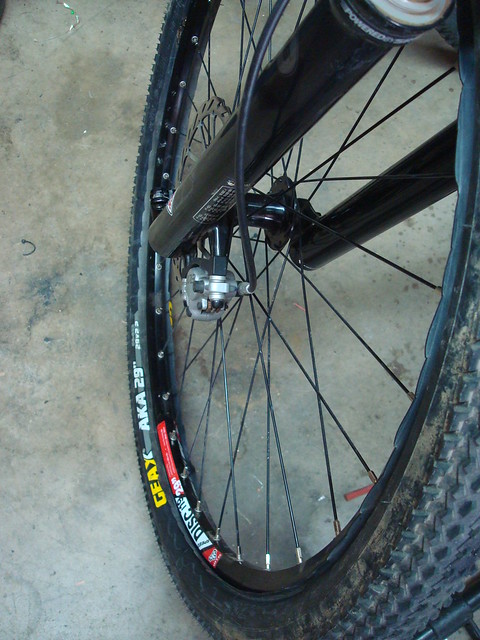 During Interbike 2012, we had a meeting with Airborne Bikes Brand Manager, Jeremy Mudd about all the great things that are being planned for 2013. One of the things he mentioned was the new Goblin and he had gladly offered us a bike to test out. Fast forward to the Fall, we received this… 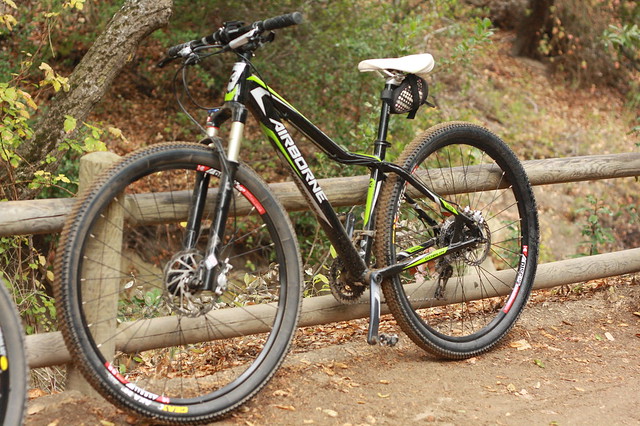 The New 2013 Airborne Goblin, Small. No doubt it’s a handsome bike and we liked that the small frame has a sloping top tube to allow stand over height for shorter folks like us at MtnBikeRiders.com

New 38/24 gearing on the all new SRAM X7 crankset that offers a better gear range for climbing paired to an 11-36 cassette.

Geax AKA 2.2 tires that roll fast on hardpack and offer outstanding grip on loose and rocky terrain

We did make a few changes to the Goblin due to personal preferences and short arms like a T-Rex. First thing we did was install a 40mm stem and then we also swapped out the Selle San Marco Power Saddle with a Serfas Tegu saddle. Why? Because my butt, it’s just so big...

Before we get on with the review, we wanted to do something different with this bike than any other bikes we’ve tested before. We figured we’d give 3 different perspective of 3 different riders who have different riding styles and prowess. We’ve recruited Team Racers, Lady P, Art Aguilar and yours truly, RL Policar. Just to give you a brief background on each rider, LadyP is a Sport level XC racer, Art Aguilar is an Expert Downhill Racer and I am a Beginner XC Racer and Sport Downhiller. Now that we’ve got that out of the way, let’s hear from each person. 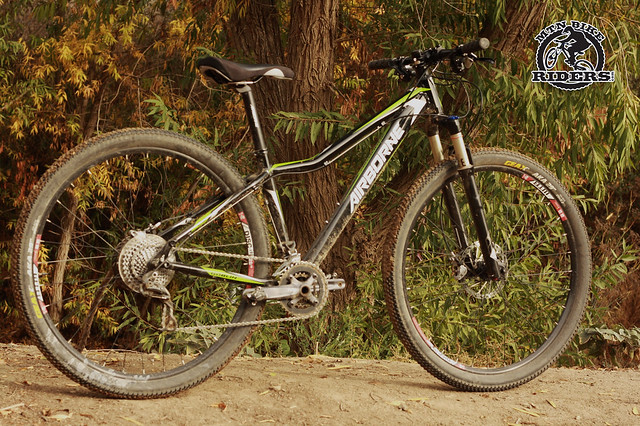 First up is Lady P

I had the opportunity to give the Goblin a few test rides on a couple of different trails. My interest in the 29er was recently peaked again when I test rode a couple of 29er bikes at Interbike/Outdoor Demo this past September, so I was eager to see what this Goblin offered in comparison. I have to say overall I was really impressed. At 5’5 I’ve always been a little intimidated by the larger wheels as I thought it may just be too big for my size. The Goblin proved me wrong. As a cross country rider/racer there are two aspects of performance that are most important to me: speed and climbing ability.

There is no doubt that the Goblin improved my speed on the trails. What was most surprising to me was how effortless it was. My output of energy was noticeably less than I am accustomed to. I rode trails that I’ve ridden for years with improvement on time and felt less tired. Increased speed and more energy is a winning combination for any rider. My performance on climbs was equally impressive. 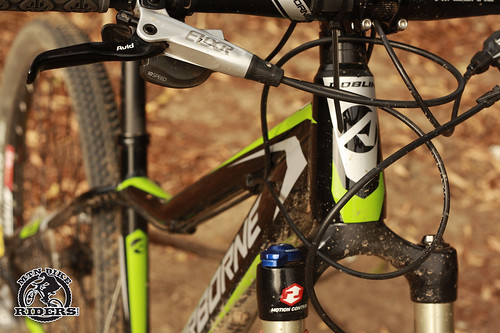 I thought it would be more difficult to climb but that wasn’t the case. The bike handled nicely on the steep inclines and it proved to make the climbs very efficient. The Goblin definitely added a different element of fun to my riding and the price point is excellent as well for those who are looking to purchase a 29er.

Well my good buddy RL Policar and I finally got together so he could hand over the new AIRBORNE GOBLIN 29er hard tail could give it a little test ride. I say an expert’s view because well I’m a expert downhill racer, come on I can put this baby through the ringer, besides I want to know what all the hoopla’s about with these 29er’s. OK this is going to be my second ride in a 29er, my first was at InterBike on the new Giant Trance X 29er full suspension bike and I know all you AIRBORNE fans out there already know about the HOBGOBLIN Full Suspension by AIRBORNE and if you don’t check out their website “NOW” ( in my best Arnold Schwarzenegger voice).

THE QUICK, THE DIRTY, and THE GOOD LOOKING
Again they hit it on the spot with cost, layout, parts spec, and a cool look. Layout, climbing, descending, speeds, breaking, and handling. I really wanted to see if it’s all they say it is, this 29er thing. The one thing that’s kept me away from 29er’s is the size, no size for a little guy(height wise) like me (RL knows what I’m talking about), well AIRBORNE delivered. The small frame has a sloped bent down tube which offered a great stand over height and that fit me just right, of course the stem change that RL made was perfect for me as well, which made the GOBLIN’s layout or what we call ergonomics,great too!

I found the bike easy to pedal. The full SRAM X7 2×10 drive-train worked awesome along with that big WTB wheel-set, the GOBLIN allowed me to go up as well as down fast and they kept me in control the whole time. 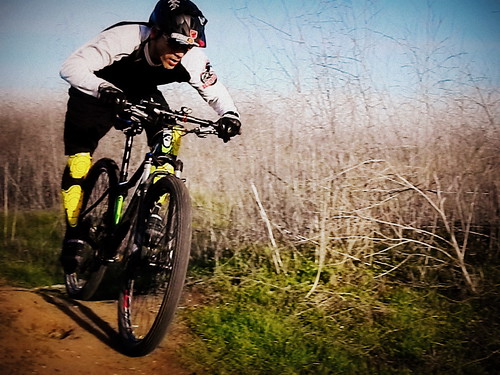 The ELIXIR 7 hydraulics stopped me quick and without issue. Now if you have never been on a 29er I do have to warn these bikes do pick up speed faster than a 26 inch wheeled bike, so be prepared to get on the brakes a little sooner than usual. The RockShox Reba RL lockout fork worked super at taking the bumps. Handling in the single track was good when you were in the wide open, but in the tight technical single track turning could be a little tough. This is all in your approach and I have to say that you’ll need to adjust your riding style a little being on a bigger wheeled bike, that being said you do have the advantage going over stuff easier. 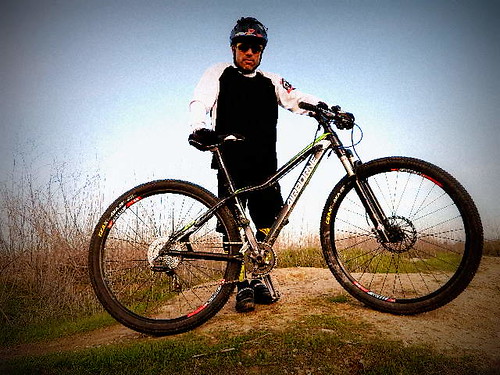 I was having so much fun on the GOBLIN I hardly noticed I was on a hard-tail. I just have to say I really liked my time on this bike. I can’t wait to some time on the new full suspension HOBGOBLIN (ahh,AIRBORNE buddies small please)

If you’re anything like me, you may have voiced opinions that the whole 29er thing was just a bunch of horse pocky. Well now I’m eating crow. Here’s what I mean, and bear with me as I go about the long way of explaining my point. When I started riding the Airborne Goblin I first had to adjust to the 2×10 gearing then I had to get re-accustomed to the notion that I’m riding a hard-tail. Once I got dialed into the bike I started having some of my best XC rides ever. I’m sure it was the combination of the larger 29er wheels and the 2×10 drive train that helped me ride fast and faster. 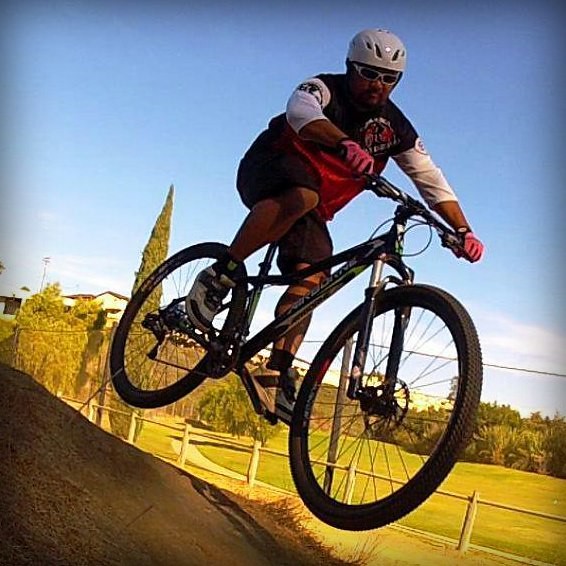 Ladyp as well as my other riding friends pretty much know me as the slower guy. For years I had always been the guy in the back. But once I started riding the Goblin things changed. With it I was able to start shaving time off my laps at the local trail. 1hour 15mins would be something I used to consider a fast lap. On the Goblin, I started chopping away at that time. I started logging in 1h, 5min laps, then I broke the hour with 59mins. While I was setting personal best records with the Goblin, my own wife and my dear friend Khoala Bear were both skeptical of what I was doing. They said that if there’s no GPS proof, then it never happened.

After work on a Friday, we decided to head out to the trail head. With a Garmin EDGE 205 in my hydration pack, we set out. I was riding so fast that Lady P and Khoala Bear couldn’t keep up! When the ride ended I logged in a 56 minute lap! Mind you, I’ve NEVER and I mean NEVER EVER been able to come near 1 hour on ANY XC bike I’ve ever had. But it wasn’t until I started riding the Goblin that I was able to smash some personal bests. 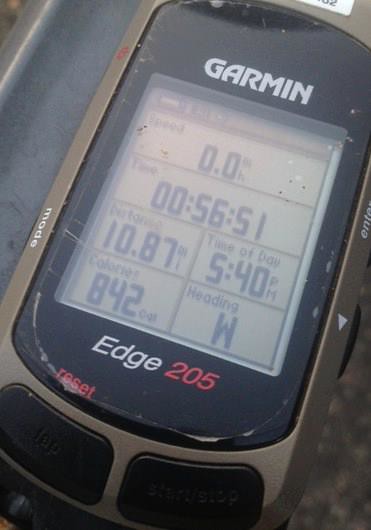 To the credit of the Airborne Goblin, I am convinced that the combination of larger wheels, 2×10 drive train and XC geometry, and fast rolling XC tires helped me ride faster. The bike really does such a great job on out pacing other bikes on flats. The best way to describe on how fast the Goblin is to picture yourself riding a road bike on dirt. Just think how fast efficient a road bike is on the flats, they can really fly. The Goblin does that exact thing, but on dirt. Climbing is pretty easy with the 24t granny and the large 36t rear cog. You can even make your climbs even more efficient by locking out the Rockshox Reba RL and since it’s a hard tail, you’re not giving up power to your suspension. 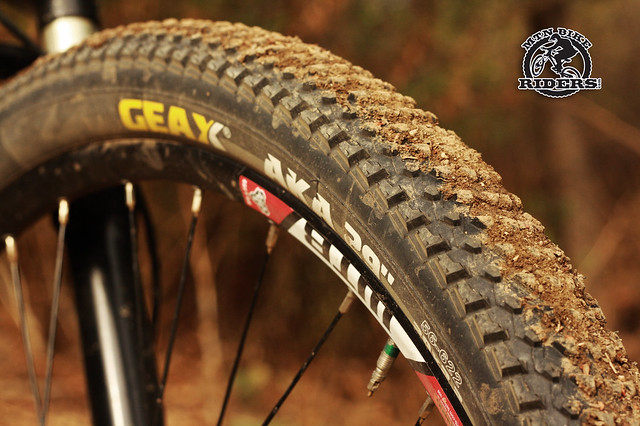 Two of my favorite things about the Goblin are the tires Airborne decided to wrap the wheels with. The Geax AKA29 has similar riding characteristics to a Kenda Small Block Eight, but in my opinion with more bite. These tires roll fast, climb great and when it comes to braking they’ll stop you without any issues. I can’t forget the Avid Elixir brakes that it comes with. Not only were they fantastic at stopping me, but I love that the levers can be easily adjusted for reach just by turning a small, easily accessible dial. 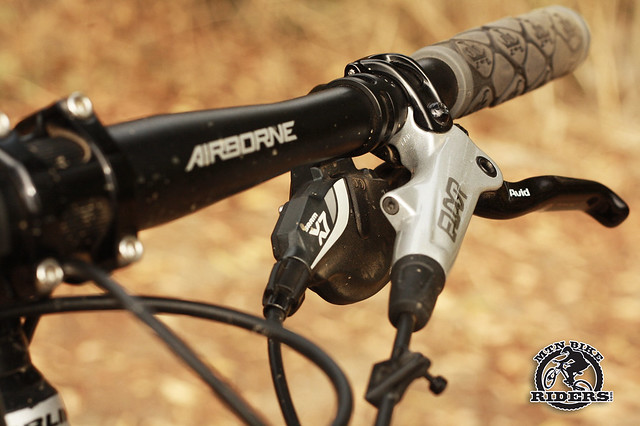 From reading the testimonials above, you’ll see that all 3 of us really enjoyed the Airborne Goblin. It will make the average Joe Mountain Biker faster without spending too much on a bike. If you compare the Airborne Goblin to other bikes within it’s price range, you’ll find the Trek Mamba and the BMC Team Elite. Both bikes are name brands, but the parts that come on it are basically entry level. For about the same price as these two brands are selling their bikes for, you can get an Airborne Goblin with 2×10 drive train, Alix Elixir Brakes, WTB wheels, Rock Shox Reba RL fork and overall, a far more superior bike.It’s almost a no brainer if you ask me. 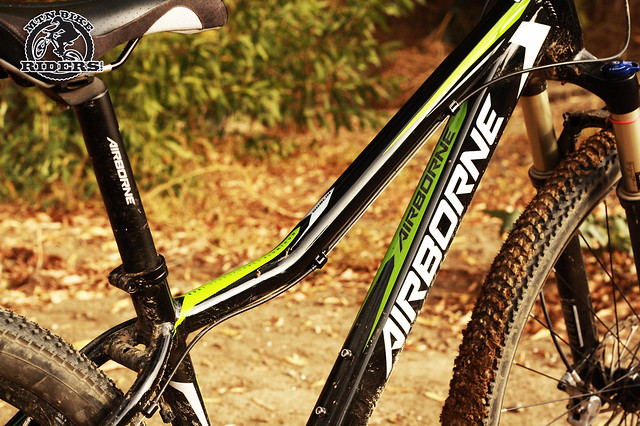 So to summarize what we’ve said, We like the Airborne Goblin and we think you will too. Great bike for the price, you’ll ride faster and your riding buddies won’t be able to keep up! 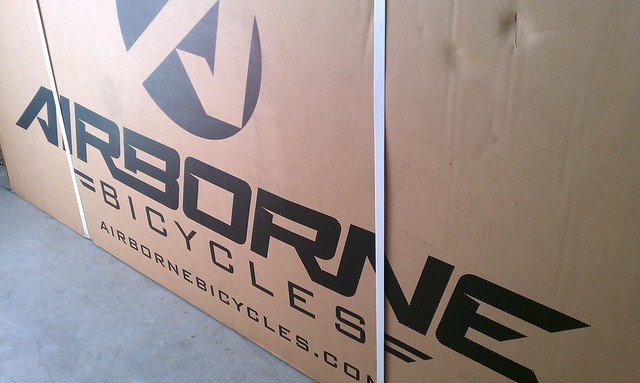 Right out of the box. 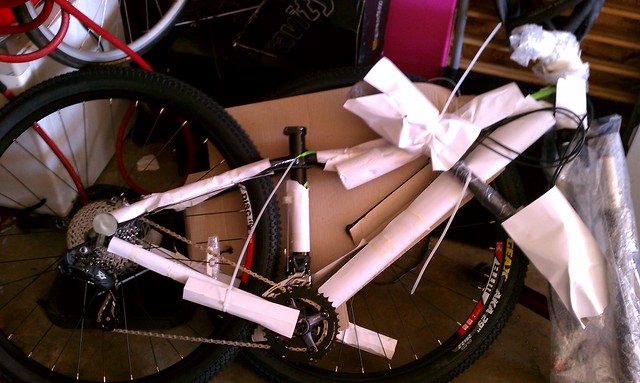 So what makes this Goblin different from the previous model? Here’s what they have to say:

New 38/24 gearing on the all new SRAM X7 crankset that offers a better gear range for climbing paired to an 11-36 cassette.

Geax AKA 2.2 tires that roll fast on hardpack and offer outstanding grip on loose and rocky terrain

Finally, the most important thing: we managed to do this all for a price of $1199. That’s only $50 more than the past Goblin in spite of rising industry costs! 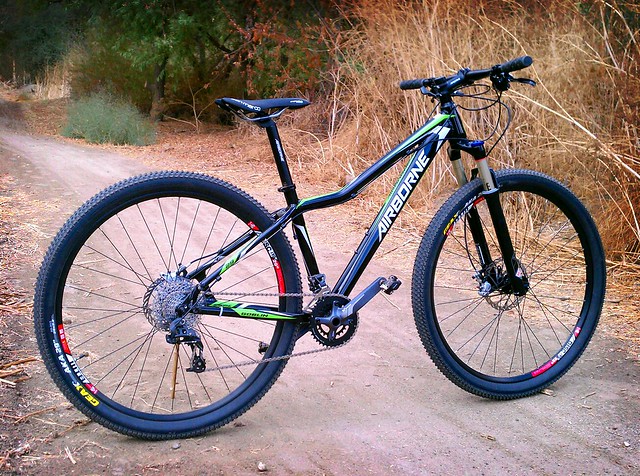 If you need more info, here’s the specs:

The Goblin’s handling is superb! I was impressed on how nimble the bike is. 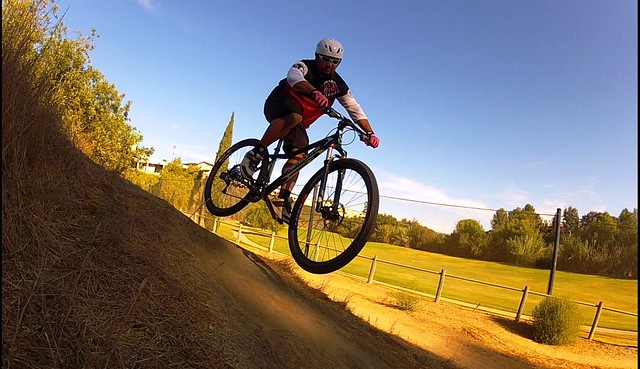 It has a 24/36t granny gear which makes climbing easy, even for out of shape people like me!

I’ve shortened the stem to a 60mm, this is more of a personal preference since I have short arms and all. 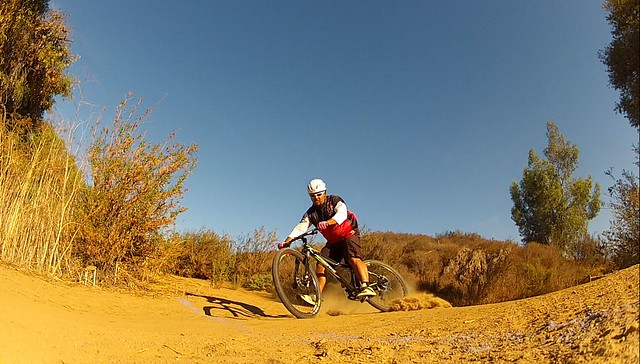 We’ll be testing out the Airborne Goblin out. In fact we’re doing something a bit different, this will be a panel review that will consist of 3 different riders testing it. So stick around! 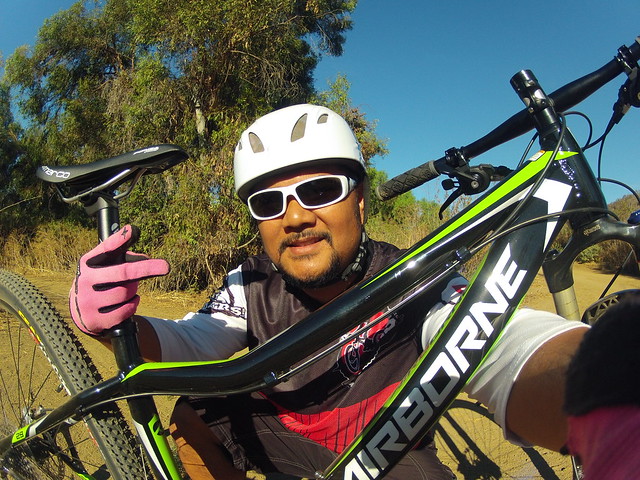