This past Sunday my friend Val and I set our sights on reaching the top of Coal Canyon.  We ride this trail often but rarely go all the way to the top.  On this ride we were determined to do so.  Our trek was planned to start at 6:00 am, however, looking outside my window at 5:30 am, it was still dark and I was not willing to head-up the trail in darkness… wild animals 🙂 We pushed back for 7:00 am.

For our regular readers, you may recall an introduction of Val, back in June 2008 when he took on our sport of mountain biking.  In the start he had difficulties and several mishaps, as we all do. 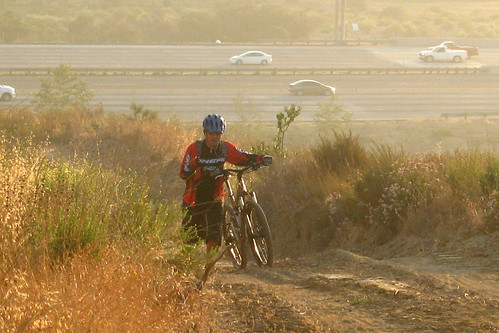 Val three months ago, walking the beginning of Coal. 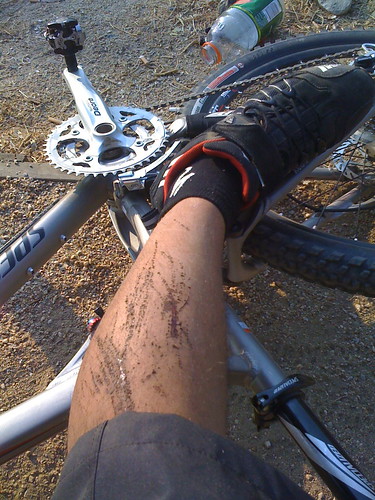 Crashing on his solo ride.

Three months later Val rode like a seasoned rider!  He climbed to the top with energy that I haven’t seen before.  Often times I was behind him trying to keep up.  The only time we stopped was when we were stuck in sand pits and for a few pictures. 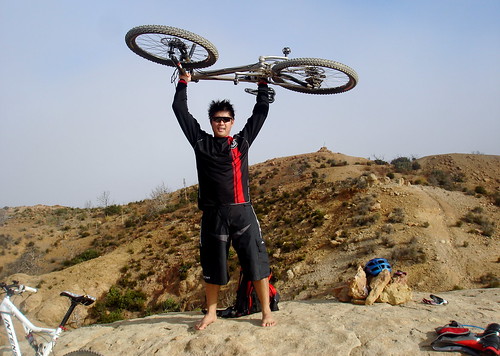 Reaching the top, approximately 4 miles from the trailhead, the morning fog was still lingering.   We headed for the huge boulders also known as “Mini Moab”.  We rested on top of a boulder and played around for a bit before heading back down. 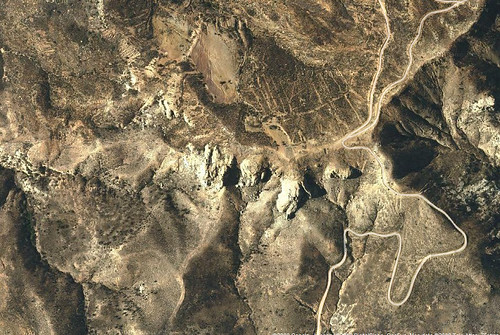 In the video below, you will notice sporadic clips of our descent.  I have a make shift housing for the Flip Mino that I am testing out.  As you will see, I haven’t figured out a way to stabilize it therefore majority of our descent was not captured.  It would often slide down were it was only focused on my handlebars.  Enjoy!

Yesterday I wasn’t feeling well so I left work early. After taking a brief nap when I got home, I decided to go for a ride in hopes that I’ll sweat out whatever was making me feel under the weather.

Closest trail to my house was Coal Canyon. As I mentioned on previous articles, Coal Canyon is a ride in, ride out type of ride. It’s a long grind up with a rewarding descent on a fire road. The ride up is usually uneventful. You either listen to music or enjoy the surroundings to get your mind off the constant climb.

Reaching the 3 mile marker, I see a rattlesnake on the middle of the road. This one had a real pretty color approximately 4ft long. Off course I had to stop and take a short video. The last time I ran into a rattler on the trail was when I rode at San Clemente Single Tracks (SCST), May of this year. Then I was only able to take a picture of the snake coil up as I ran out of space in my memory card for a video clip. With the Flip Mino in hand, I recorded the rattler move to the side of the road. Always at a safe distance, I gave it some assistance by throwing little pebbles at it.

After the entertainment, I continued to climb for another half mile then I decided to turn back. Bombing to the bottom was fun as usual however there were plenty of sandy patches that slowed me down. By now, the sun was setting thus getting darker in some areas of the trail. As I turned one of the corners, there was a buck that I startled. I was able to get the Flip Mino out to record however, the buck was too far and was just a speck on the clip. Good times, even when solo!

As you recall on Father’s Day weekend, I took my friend Val Macatangay for a ride at our local trail – Coal Canyon.

Since then, he’s been frequenting this trail.  Almost on a daily basis, Val hits the trail at 6 am – rides from his house and climbs a little further than the last.  Little by little, he is getting better.  He recently told me that he is getting acclimated to what the trail has to offer.  He enjoys the workout of the climb and looks forward to the reward of the descent…

Several days ago, Val headed up Coal Canyon.  On his way back down, he was going pretty fast.  On a fireroad descent, you can easily let things fly.  As he neared the bottom, he overshot a left-hand turn.  Panicked, unable to unclip and the fear of going over the side – he laid his bike down.  He stopped his momentum with the left side of his body, including his face…OUCH!  Unable to ride his bike all the way back to his house, Val had his wife pick him up at the trail head. 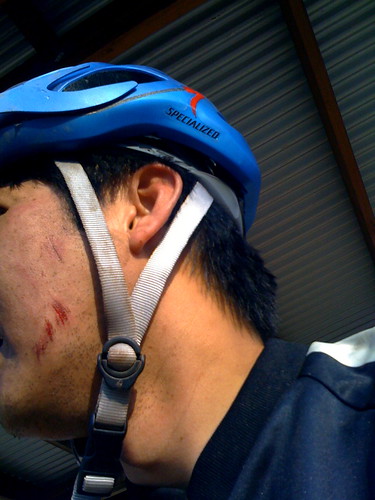 Crashes are common for both beginners and experience riders in our sport.  For Val, he did not let this crash deter him.  He was back at Coal Canyon two days after grinding up the mountain and bombing back down.  Way to go Val!

This was a fun filled weekend of riding.  I rode both days making trips to a popular Orange County trail – El Moro and my local trail – Coal Canyon.

Saturday: I headed out to El Moro bright and early for a solo ride.  It’s been awhile since I’ve been here.  Last time out w/the MtnBikeRiders’ crew, El Moro was closed due to rain.  Arriving at the Ridge Park, I noticed that the parking lot was full.   There will be a lot of hikers, joggers and mountain bikers on the trail…  I entered the park through the northwest corner which starts on a fast fireroad that descends towards a technical singletrack called Rattlesnake. 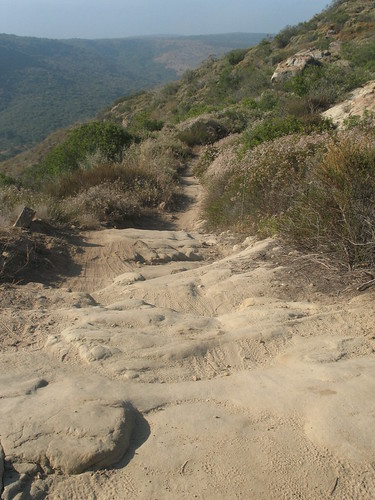 On the way to Rattlesnake.

The trail was in excellent shape…   making my way out of Rattlesnake, the trail transitions into a graded-like  singletrack covered with tall plantation.  From here the fun continues as it switches from singletrack to a fast fireroad which eventually leads into Mach One – another fast descent, hence the name. 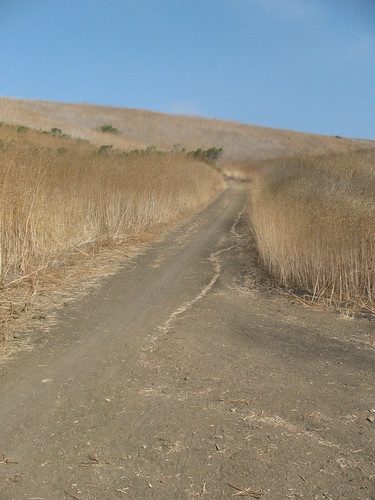 Looking up from the bottom of Mach One.

I climbed up a steep fireroad called – I Think I Can.  As I reached the top there were many riders gathered at this junction.  Apparently there was the S.H.A.R.E. Poker ride which I had totally forgotten about. 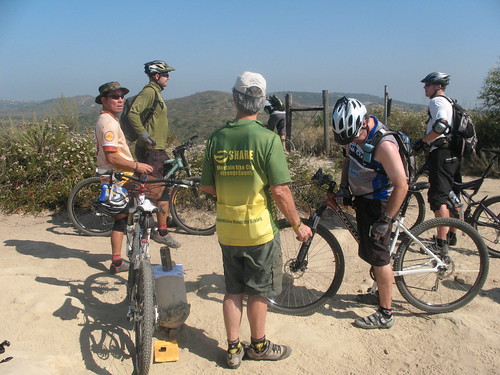 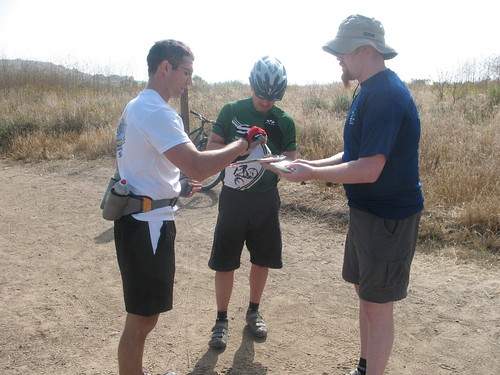 Checkpoint at the top of I Think I can; rider picking his card.

There were many faces present that I have ridden with in the past.  From here on until I exited the park, the trails were busy with participants from the Poker ride.  Overall the trail was in great shape.  There were a few sandy spots, but that’s expected.  Fun ride!

Sunday:  I rode Coal Canyon with my co-worker/friend Val.  He lives close to me, however much closer to the trail.  I rode approximately a mile and half from my house to meet Val; from our meeting point we rode another mile and half to the trailhead.  We started at 6am to beat the heat.  Val is new to mountain biking so he wanted a crash course with what our local trails had to offer.  This would be his first ride on anything that has a consistent climbs. 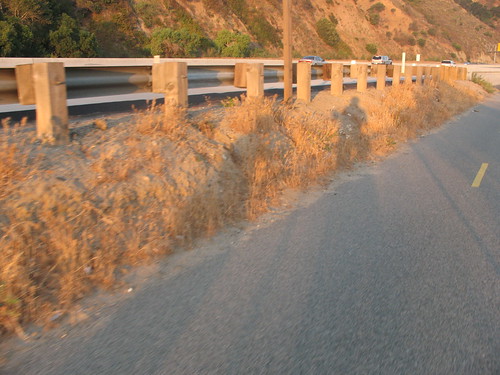 On the way to the trailhead; paralleling the 91 fwy.

The ride was uneventful being that it’s nothing but climbs.  However, the trail did take an early toll on Val.  Within the first mile he ended up walking his bike.  This is nothing to be ashamed of as we’ve all done it and it’s a part of riding.  After a few breathers, he was able to regroup and continue to ride.  We rode up to the two mile marker and headed back down.  I was able to capture our descent through my helmet cam, however it’ll take me longer to put together a video. 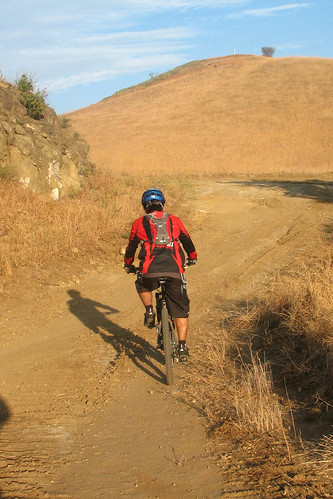 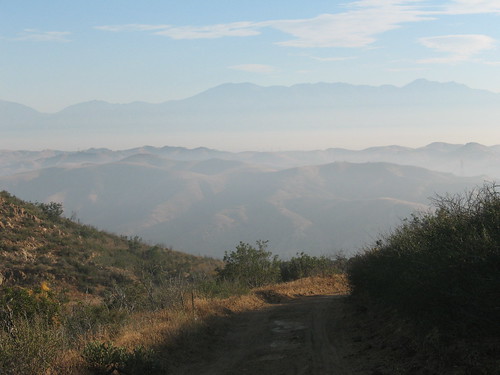 View of Chino Hills and the San Gabriel Mtns.

Overall the weekend was great for riding.  We are heading into our summer heat so plan your rides accordingly.