Trek Demo, Fullerton Loop tomorrow, Saturday May 31 from 9am to 3pm.

Even if you’re not interested in buying a bike, demoing bikes is super fun. My friend Tim & I went to the last demo day here in Fullerton and had a blast riding Treks and Gary Fishers. Tim wasn’t looking for a new bike at the time but was so blown away by the ABP of the Trek Fuel EX he ended up purchasing a Trek Fuel EX 9.0 after the demo ride. Great props to our friend Matt Gutowski for all the hard work he does in setting up the demo and dialing in the bikes for the ride.

But, if you decide that you are interested in in a Trek, Gary Fisher or Lemond, check this out… particularly the last line:

Join us at the Fullerton Loop from 9am – 3pm

Ride the newest 2008 bikes from Trek and Gary Fisher including the New Trek Remedy, New Trek Fuel EX, Trek 69er’s, Fisher HiFi’s, Fisher 29er’s and also the New Trek Madone road bike. Come and experience what all the buzz is about on these class leading products.

Where: Fullerton Loop
When: Saturday, May 31st from 9am to 3pm
What to Bring: A photo ID, cycling shoes, pedals, helmet and a bottle of water. We’ll have a few pedals in case you forget.

For more information visit www.jaxbicycles.com or Ride the Best.

Print this page and bring into any JAX location to receive $100 off any bicycle prices $999 and above.

Don’t print our page! I don’t know how much good that will do you. I’ve linked the page for you. Here is the link for $100 off. 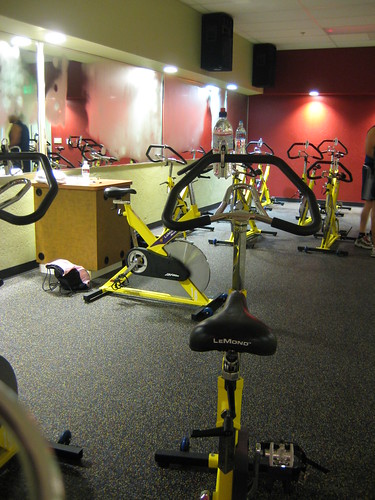 I took my first spin class this weekend. It was early on a Saturday morning and the pervading thought I had during the class was: “I’m glad all I had to eat was a banana”. Why? Now, I’m getting ahead of myself.

The class started at 9am and was taught by a friend of mine. She is actually not a biker but is a popular spin instructor and known for her “speed” spinning. We got there a few minutes early so I could adjust the bike to me. Since I’m strictly a mountain biker with a little around town commuting, I had no idea how to adjust all the other bars. I set it all up as I normally would for a mountain bike and hoped for the best.

It started off easy enough. Gentle spinning to get warmed up and then came my first challenge: turning the knob. Well, to be more specific, it was turning the knob to find the right tension. It really took me about half the class to figure out how much tension was being applied as I turned the knob. Sometimes half a turn was enough. Sometimes the knob required a full turn. But most times the knob required three plus counterclockwise turns to get me to stop feeling as if I had to puke. 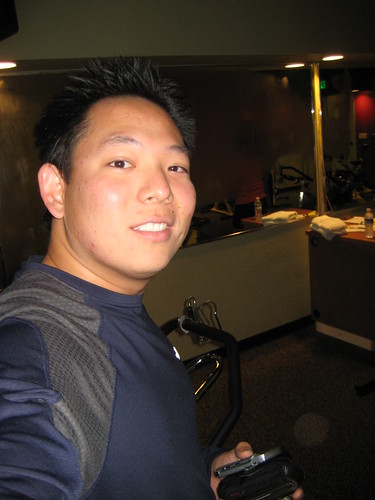 So naive before the class of pain and torture, otherwise known as spin

Next challenge? Standing up. It took a bit of courage on my part to dare myself to stand up. Seriously! The whole balancing act of standing and spinning the cranks quickly and reaching forward to grab the upper part of the bars and keeping your weight back so you’re not using as much of your upper body during the exercise… My friend, in regards to my “standing” said something along the lines of you looked stupid in the beginning but towards the end you only looked semi-stupid… but in a much nicer way of course. I took that as a compliment.

I had to really try hard to keep myself from fainting. Before the class started, my friend asked an innocent question “Do you want to do a 45 minute class or an hour?” “An hour” was my machismo reply. To my chagrin I started looking at the clock after only 15 minutes. 15 MINUTES! I was already tired after only 15 minutes! How was I supposed to last another 45? So what comes first? The fainting or the puking? For me, it was the feeling of wanting to faint. I was utterly exhausted as the 20 minute mark inched by. Maybe “inched” is too large a measurement value. It was more like “millimetered” by. At the 25 minute mark I started to feel a little light headed. I began to concentrate a little more on breathing deeply because in a room full of bike spinners (4 to 1 female to male ratio) I was not about to embarrass myself and faint. Plus, I rode mountain bikes, dang it! 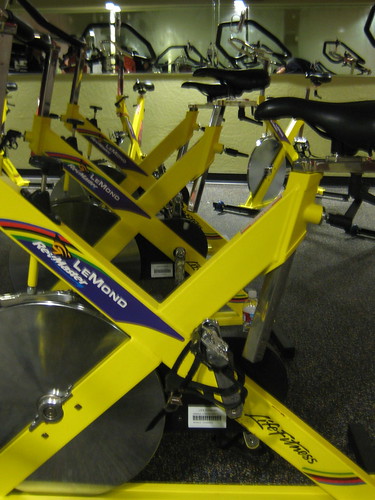 The LeMonds. I hate yellow LeMonds.

At about the 35 minute mark I considered hurling. It was during the standing part when my friend (who had become my temporary enemy) kept saying “turn the knob”. My male ego wouldn’t allow me to not “turn the knob” and by the 8th “turn the knob” over a two minute stretch I began to think: “I’m so glad all I had to eat was a banana”. Thank God, I only had a banana.

Somehow I made it to the end. Other profound moments during the spin class: At around the 46 minute mark I chewed myself out for choosing an hour class over the 45 minute option. After I got off the bike I nearly ate it. I thankfully grabbed the seat of my “LeMond” and steadied myself before everyone knew for sure that I was both a complete idiot and a complete klutz.

Good times, good times. Would I do it again? Give me a few more days to think about it.