This past Saturday my ride was at Turnbull Canyon in Whittier, CA. Since southern California has been pounded with rain and storm for the past several weeks, this would be the first dry weekend for riding… In addition majority of Orange County’s trails are still closed due to the rains. Needless to say there were a lot of mountain bikers that flocked to Turnbull. 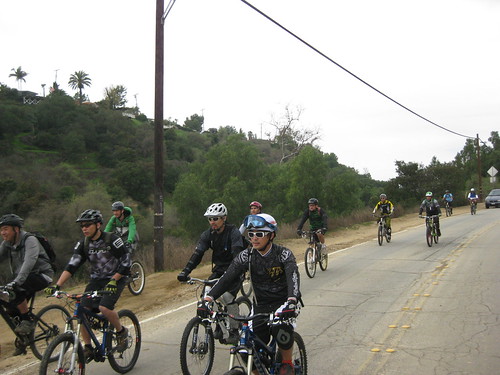 Heading to the trailhead

One highlight of the ride was my friend, Dexter, invested in the Shuttle Buddy. This is a motor assisted contraption that mounts on the rear wheel of your DH bike. 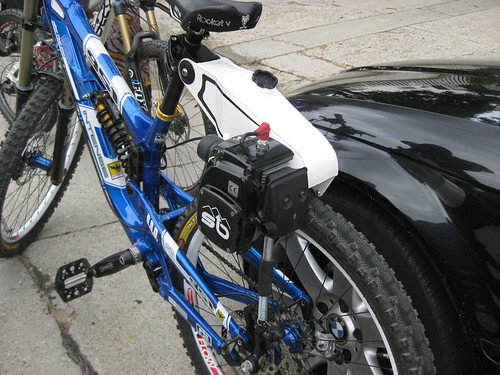 Basically this is a self-shuttle for those who can’t pedal up the mountain. This would be his first trial with the Shuttle Buddy. From where we parked our cars, it’s about 1/8th of a mile to the trail head. The Shuttle Buddy motored him like a mo-ped. For awhile it sounded like a lawn mower was following me. Unfortunately his Buddy crapped out on him halfway up the first climb on dirt so I never got any details on how it was working for him. 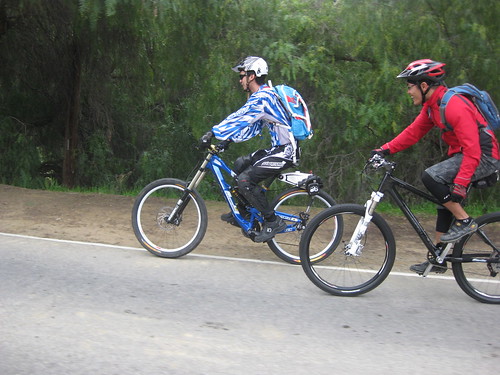 Onto the trail… conditions were excellent! There were a few wet spots but nothing that would cause trail damage. As always, Turnbull is a fun trail. If you’ve been there, we made our way down the switchbacks to 7th Street. This is a fast descent after the series of switchbacks. From here we climbed up a different set of switchbacks and headed to a singletrack called A-line. If you haven’t been there, below is a video of the downhill sections we rode on Saturday.

On the same day was the first race of the Southridge 2011 Winter Series. As you read SSuper Dan’s race report (the post prior to mine), while I was making my way to Fontana, he was tearing up the course on his singlespeed. Congrats Dan!!!

For 2011 I decided to move to the Sport Class. Registered and ready for practice RL, Wes and I headed up for a run. This would be the first run for RL and I. Prior to riding we walked about halfway down to check out the course. Not too bad, although there were some steep, roll-able sections. 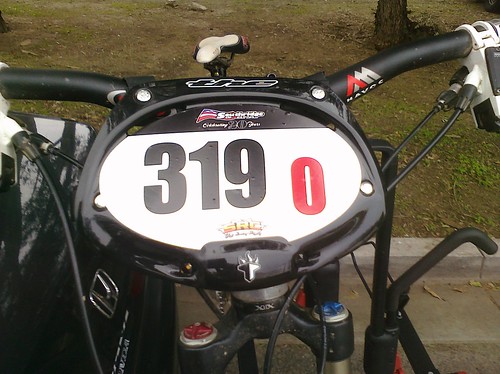 Making our way down I was following RL. At some point I wobble at a section where I stopped and we were separated. Now I was making my way down without anyone to follow. I reached a steep section where I should have gone right, instead of left. On the right was much smoother transition; the left were rocks that gapped. Into the drop, I knew I was going over… I hit the ground – lights out! I’ve never felt pain like this before. Immediate pain on my right butt cheek radiating down to my leg. Fortunately there were people there that assisted me. Photographer Tibor Fazekas (www.tibiphoto.com) captured a sequence of my OTB. They stopped practice until I got my bearings. They eventually helped me off the course and EMTs came up to tend on me. Fortunately nothing was broken, just got my bell rang.

Coming into the section. Photo by Tibor Fazekas, www.tibiphoto.com 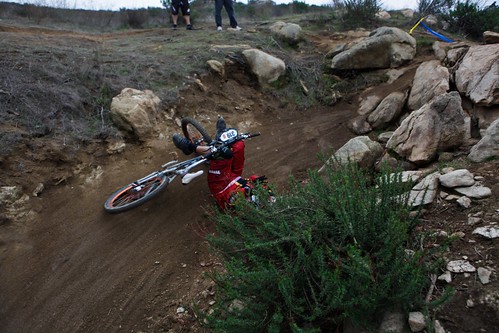 wadding up with my bike. Photo by Tibor Fazekas, www.tibiphoto.com 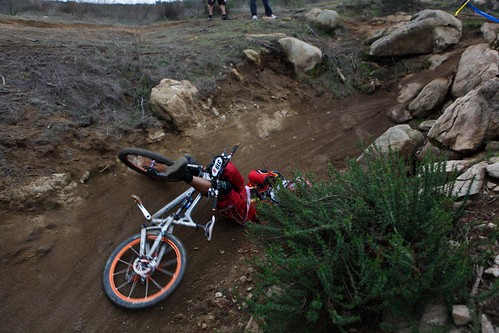 While the EMTs were working on me, they resumed practice and guys started coming down again. A series of guys come down, then one of my friends comes through and does the exact same thing I did but slams his head onto a rock! Result – broken helmet and a couple of gashes on his head. This was not good… The EMTs started working on him to stop the bleeding. We eventually made our way down the course where they loaded us on the shuttle vans and took us to the bottom. I ended up going home, bruised and very sore. Needless to say, no racing the following day. Come to find out that there were a lot of casualties from this race. It was tough all around… 🙁