Another Adam Spik Original. This one talks about my favorite subject, FOOD!

So with the recent Memorial Day holiday the weekend lent itself to the charring of flesh. Like any real man I like grilling and barbeque. Yes, there is a difference between the two. Perhaps I will give you an education on the two in a future post. On to the present. Several years ago, my friends had a party to celebrate the end of their PhD program. High science brainiacs they are; chefs, not so much. On the counter sat a mound of ground beef. I inquired as to their intention, already knowing the answer. “We’re just going to make patties,” was the response. What are we, heathens? No seasonings? This ain’t the dark ages. I cracked a few cupboard doors and perused the fridge. A little diced onion, a few splashes of worchestire sauce, quickly made bread crumbs, toss of spices, and an egg were all thrown in and massaged into flavor. The burgers were a hit.

So Dirty calls me up Saturday and says, “Remember those burgers you made at the UCR party? What’s the recipe?” I gave him the original recipe as well as a dozen different iterations I’ve tried over the years. I am not one to follow recipes verbatim. Nor am I one to write down a good recipe I’ve created. Soups and sauces are the worst for me. I throw a bunch of stuff together, it turns out great, then a month a later I ask the wife, “Remember that **** I made awhile back? Do you recall what I put in it?” If you have the pleasure of of sitting down to a meal from me, and you like it, savor it. It might not be the same next time. What was I writing about? So I tell Dirty all ways I have tried to change-up the simple burger. I’ve added everything from various barbeque sauces, mustard, liquid smoke, chiles, and a plethora of seasonings. Then I realized I was no longer making burgers but instead making meatloaf on a bun. So I pared it down to the essentials. What do want to taste in a burger? Exactly! The beef.

So now I tell him my current recipe is beef, sea salt, cracked pepper, onion powder, and that’s it. There are however two very important keys to getting the most out of your burger. One is how you cook it. Rare. You want well-done, then go to Carl’s Jr and buy a hockey puck. Two is the beef itself. Forget your diet. You’re eating a burger, so enjoy one. There is no buying “lean” ground beef. You want 80/20, no leaner. Obviously fat is flavor, but it is also moisture. Once that scant amount of fat burns off from your lean beef you are left with a dry patty that should be served from a clown in a drive-thru. The byproduct of ol steer’s laziness will reward you with delicious juiciness. It truly does melt in your mouth as it melds with the cheese. So good it doesn’t need extra accoutrements. A slice of tomato, cheese, and the bun. . . mmmm, tasty. You know who you thank for that? Fat. 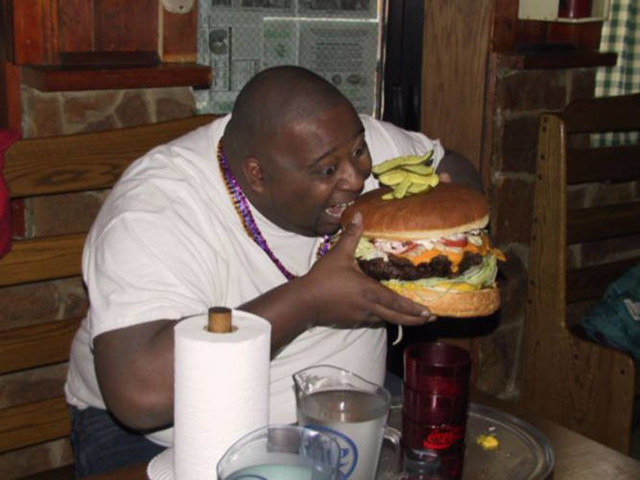 So Dirty says the burger V2.0 was great. I say thanks for all the epic rides we’ve been on and all the ones to come (Downieville next month). I pay homage to you by starting each paragraph with “So.” Any story of importance from him begins with “So . . .” as in so there I was, so I riding *** trail, or so RL has this bitchin website.