Here are a few of the cool, new and otherwise blingy things that caught my attention at Sea Otter this year.

Purely custom had their take on a bashguard. The bashgaurd is covered in a with a rubber/silicone type edge. Not only it this piece support to protect your chain-ring from hits, but also as demonstrated in the picture it is designed to give a little grip or traction on your way over the big rocks.

For those of you out there who are interested in or already using a belt drive from Gates, there is a new system coming down the pipeline. This new belt is a center-track system. According to their rep, the system is supposed to stay in alignment better and at a lower tension on the hub. As you can see in the pic, the cog has a center ridge to keep the belt aligned and the belt has a matching groove.

DT has release new internals for their hubs to increase the engagement from 20% to 30%. As a fan of high engagement hubs, I found this to be of interest. Art already mentioned in his post about their release of the Tricon wheels in the 29″ variety.

On Saturday Master Yoda (Art) and I went over to the DH course to watch Joe race and got to watch some of the other racers as well.

Project 321 had some really blingy parts on display. They had their own hubs with Industry9 internals, and can custom finish parts in a large variety of colors. The they had gold finished set of stan’s rim with matching gold hubs on display.

Renovo had some cool looking wood bike as well. I don’t know how they rode, but they definitely looked good.

While at Sea Otter I had the opportunity to demo a few bikes, and as it turns out all of them happened to be 29ers. So here’s just a few quick thoughts on the demo rides, but before I go into the bikes, just a brief explanation of the demo loop I was able to ride them on. I was told the whole loop what about 4 miles long and it was almost entirely single-track. It starts out with a switchback descent into rolling hills. Overall, there is nothing technical, but it was very enjoyable. After a few climbs and descents with only one moderately steep climb, there was a fire-road climb that also doubled as part of the XC race course. This led to the end of the demo loop with a fast and flowy single-track that sent you back out to the main road. It was an absolutely gorgeous view to ride through. Lady P was even able to join me on a couple of the loops. There no long extended climbs to grind, but just fast, fun single-track.

One of things I on my short list to check out at Sea Otter was a carbon frame, and Breezer bikes was the first I was able to talk to who had with a carbon 29er HT available for demo. My timing was a bit off and the Cloud9 was not currently available to ride when I stopped by. However, Fuji a partner company with Breezer had their XC full-suspension 29er available, the Outlander. So while I waited for the Cloud9, I took a quick loop and on the Outlander. You can find all the specs and build info on the Outlander here.

Overall impressions: the Outland performed well through the single-track course, and did well, but not outstanding. Handling was good and not too far in either extreme. My only real complaint was the weight. It wouldn’t be the lightest bike out there, but for the price point it is not a bad option.

Once back from the first loop, the Cloud9 was ready to go. The bike was an XTR build and with the carbon was very light. Here is the info on the bike from the Breezer. The Cloud9 was exceptionally nimble. It was very stable in the descents and climbed even better. There was no question in my mind this would be an ideal HT race bike. I didn’t get hard weights on the build but easily low twenties. I flew through the demo course whipping the back end around the turns and off every light bump to catch air. Not only was this bike fast, it was fun! To find anything negative I have to be a little picky. There were only two issues I could find with the bike, the first being the stock front tire. I have ridden the same tire on other bikes and already knew before heading out that it does not suite my riding style. The second issue, and this mainly caught my attention because of the carbon frame, was that the top of the chain-stay on the drive side was getting slapped pretty good by the chain over all the bumps.

Overall impressions: While this wouldn’t ever be the cheapest option around, sometimes you get what you pay for, and with a full XTR build the Cloud9 definitely is no slug. The carbon was very smooth and didn’t leave me wanting for any suspension. If you’re looking for a carbon HT, then you’re probably already willing to pay the proverbial piper, and this frame should be one to consider.

The Niner WFO was on my short list of bikes to check out in that I am trying to decide which direction I want to go with my next AM build. One thing I want to be clear about here is that Niner themselves were not present at Sea Otter, but what I believe was a local dealer had several of their bikes available for demo. In a word I was disappointed with the demo. Looking back on it, I wish I had taken the Air9 Carbon out instead. The issues I had are more with how the demo was setup and run, so I hesitate to make any serious critiques for this reason. The shop did not take the time to set up the suspension appropriately to my weight. I asked for a large frame to ride and got a good looking WFO in black licorice. It turns out when I checked after the ride that the frame was a medium, which was something I ended up fighting with the whole ride, but that was definitely the lesser of the two main issues I had. The WFO struggled to hold a line in the first couple switchbacks and once I got it airborne it did not do well. I stopped and got off the bike to check it out more, and found out that both tires were virtually flat. I ended up just nursing back and wasn’t really able to put it through its paces. Like I said previously, disappointing. I put the most of the blame on the shop running the demo program, not on Niner or any issues with the frame or components.

The very last bike I was able to get a demo ride on was from Giant, their new Anthem 29er. This frame is their 4” XC race bike and is very light for full-suspension ride. I made sure to take advantage of this light weight and was able to flick the rear end around turns and off small jumps. The Giant rep I spoke with before taking the bike out claimed the build was in the 24lb range. This was still the aluminum not carbon version. While I wasn’t carrying a pocket scale, I do not think it was quite that light, but I it felt close to my steel HT in the mid 25lb. It was a good balance of descending stability without sacrificing too much ability to climb. I am not a fan of steering on the twitchy side of things, and the Anthem 29er handled very well, quick enough when need, but never sluggish.

Overall: My only complaints about the Anthem 29er were the some cockpit preferences and that the shock was difficult to reach on the fly to flip in and out of pro-pedal, although my guess is that not many people would be flipping back and forth that much. This would make an ideal race bike, with just enough travel to take the roughness and fatigue out of the trail. The thing about it that impressed me the most, in case you had not noticed was the low weight.

Check out the new D Series Bikes from Redline Bicycles. 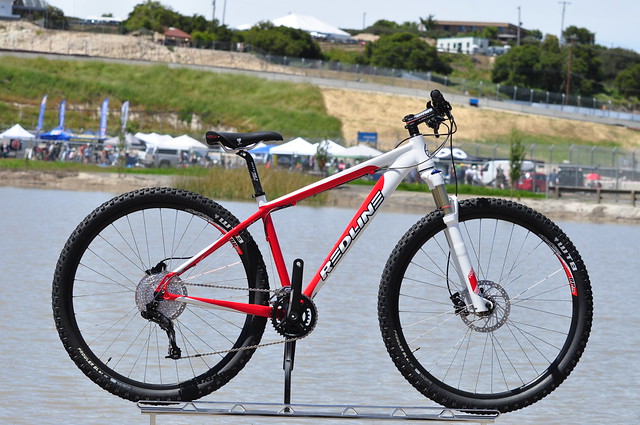 As my day in the office is coming to an end, and my night for MtnBikeRiders.com gets started, I can’t help but feel excited about this coming weekend at Sea Otter. I’m not sure how to control all the excitement because I’m getting anxiety attacks and I probably won’t be able to take my pre-drive nap this evening.

Just so I don’t forget anything for the weekend, I’ve made a short list of things  that I’ll need to make sure our driver loads into the Limo.
1. Bike(s) Always carry a spare. That way you can match it to what you’re wearing!
2. Allergy meds.
3. Alcohol
4. Lube (the bike kind…pervert)
5. Chain or in this case, my cable to lock the bikes.
6. Cameras. Get ready to be blown away with our highly coveted photos and videos! Other websites will be so jealous of us. We’ve invested a ton of money ($4.56) into the technology we’re going to use just so we can enhance the viewer experience of MtnBikeRiders.com.

The GPS says we’ll arrive on Monday, so that means we may miss the event entirely. But if we follow some truckers heading north somewhere, I’m almost certain that we’ll end up in Monterey, Ca. See you on the flip side and make sure you check out our Facebook Fan Page to keep updated.   We also have this thing called a Titter account. I’ll be Titting through that as well.