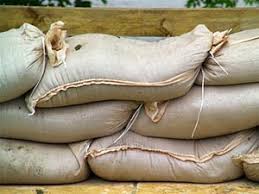 Recently Priscilla received ad bulletin on her Myspace account about some dude venting regarding people in the local races sand bagging. If you’re not sure what sand bagging means well here’s a definition that will relate to mountain biking.

Basically its people that enter races as a “beginner” but really they should be in sport or expert. What happens is they end up finishing the races in faster times than the real beginners. A few years ago I had entered a few races where I saw the same guy in beginner over and over again. This fella kept winning. At one of the races he completed the race in 40 minutes, and yes being as slow as I am finished at 1 hour 10 mins. Then in another race at a different course, the same guy won and I got 7th out of 10th (much better for me). Not only is it a bummer for guys like me who race once in a while but for my butt to be handed to me by some guy sand bagging. I decided to look at the results from previous races. Guess what? This dude had won every race in the beginner category for a few seasons.

It’s people like that who tick me off. I mean you know you’re fast, then why not race in the sport or expert or even pro category? Why race in the beginner level? Is it for the glory? Is it to place on the podium? What ever your reason is…its dumb. Some may say….”oh I’m going to finish out the season in beginner….then move to sport….”

But you know what happens when you jump from beginner to sport? You get your butt handed to you by faster guys! HA! I think that’s justice right there.

Here’s the thing, you ride with slower riders, you’ll ride slow. You ride with faster riders, you’ll ride fast. So if you race, I would think your goal is of course to win, but also to move up the ranks. I think what had happened to the sand bagger was he got used to being the fasted beginner, but that wasn’t fast enough in sport. In fact the guy hadn’t won or eve placed in the top 5 in sport for over a year. I think he pigeonholed himself and now he can’t keep up with the faster riders.

So moral of the story? Don’t sand bag, you’re just hurting yourself.