This was race #4 of a 6 part series at Fontana. What’s neat is we’re starting to see familiar faces of other racers and we’ve made a few friends here and there.

On Friday I was able to take one practice run right after the marked the DH course. One run just isn’t enough to get familiar with the course and even find hidden lines that would work better on your race run. With that said, I made sure I took a helmet cam video during practice and watched it over and over again just so I can see where I needed to go.

Come Sunday, I arrived at the venue late. Basically as soon as I pulled up, they announced that sign ups were closed for the day. I quickly ran as fast as I could to the ladies that did registration, and because of their kindness, they let me in. I soon checked the seed list and saw that my old rival, Johnny Dow of KHS Bicycles was my only competition. As soon as I turned around, JD showed some relief that he would have someone to race with. We chatted for a bit and we parted ways since I had to get my gear and bike ready for the race.

A few last minute check up on my bike and I was ready to roll. We boarded the shuttle vans about an hour after registration and at the top of the mountain, JD and I hung out. What’s funny about JD is that he likes to make you think that he’s not a good rider. But I’ve seen how he works on the trail and the guy does have some talent.

As they called up each group to race, a few of us had to wait until the end to line up so that gave us an opportunity to cheer on our team mates as they rode through the course. First it was Tony Finch, man that guy flows like water. Then it was a Moe, Joe and eventually Kim’s group as well as my group (JD and I) lined up.

Right before Donny counted down JD, I gave him a pat on the back and said for him to have fun and be careful (we had seen quite a few crashes already). Off he goes and he had a great start and I watched him disappear as he went into one of the turns. What’s funny is, I normally don’t get nervous until Donny counts me down from 15 seconds. I take a deep breath, and as soon as he said 1, I pedaled. 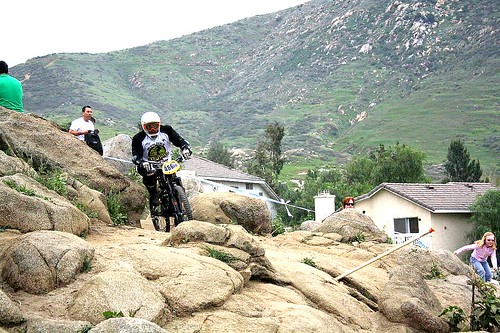 I rode through the somewhat unfamiliar course as fast and as safe as I could. I knew I was going way too slow on some of the parts. I make it through some of the toughest sections in which we had seen many riders go down and I eventually make it to the bottom of the mountain. Before I get to the lower rock garden, there’s an inclined road that I normally would sprint through. But my legs were feeling the burn and I sat down and pedaled as hard as I could. I get to the rock garden and there are still a large number of spectators watching and I maneuver through the area, but I felt like I was in slow motion. I finally pass the garden and hit the infamous wall. 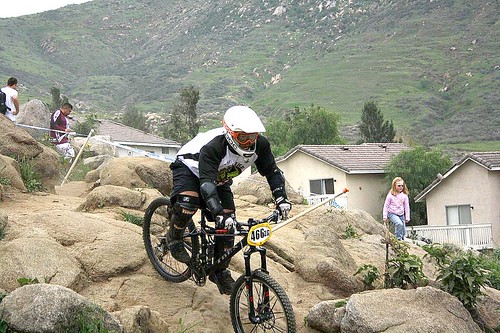 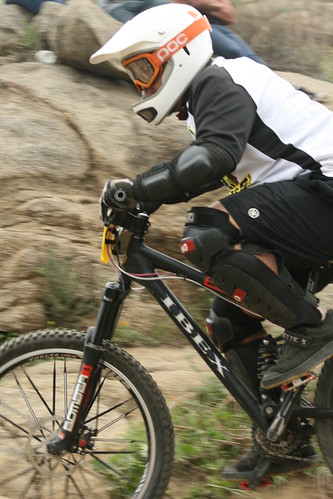 In the last few races, I hammered the wall to make up for lost time, but that day, my body was worn out. My legs were burning, my lungs were on fire and I had nothing left but a weak pedal through the finish line. I meet up with my team mates and ask them how far I was behind Johnny, Moe said he counted about 30 seconds and Kim’s face wasn’t reassuring as she said that I took a while to get through the line.

Walking to the awards ceremony. 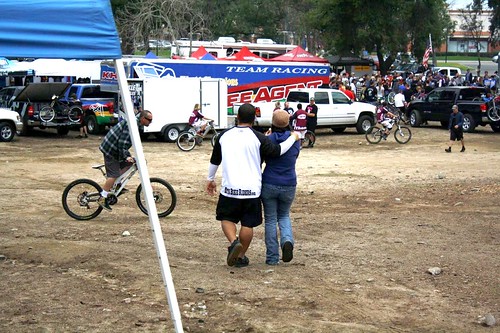 Though no mechanicals or crashes occurred, I felt that my run was lack luster. Results were up and I saw that JD took first by beating me with a whopping 6 seconds! I walk over to JD to congratulate the fella, that was a well deserved win. JD is one great rider and I was honored that he and I were able to compete against each other. The last few races, he wasn’t able to ride due to illness and he really showed his determination this past weekend. 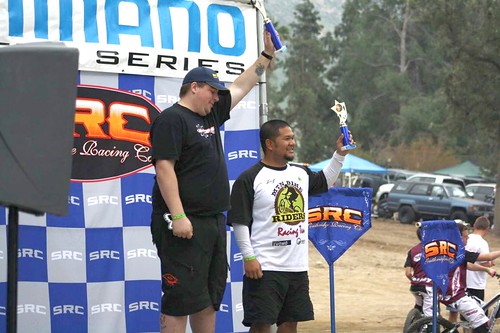 Now that the race is over, I keep going back in my mind about all the scenarios where I could have done better. I’m sure everyone does this and I am pretty resolved that more training, practice runs and time in the gym will be needed to execute a better race run.

So here’s what was encouraging. When I entered my first DH race, I placed 15th out of 22 or something like that in the 27-34 age group. I purposely gained weight (its called the holidays) and raced in the 200 Club since my previous race time was more consistent with riders in that group. But when I saw my race results this past weekend, I was pleased to see that I would have placed at least 8th in the 27-34 category. Keep in mind 27-34 are a fast group of skinny riders. Though 8th place isn’t podium, but I considered it progress that I could hold my own against some really fast racers in the 27-34, I figured once the winter series were over, that I’d drop at least 20-25lbs or more and compete with my respective age group. As for now, 2 more races to go and I’m already looking forward to go against JD!

I’d like to thank our sponsors for supporting us through the series, Evomo Clothing, Ergon, Hoss MTB and I’d also like to thank Ibex Bikes for providing me the Ibex Ignition Frame to race with.