July 11-12th (2009) several members of the Mtnbikeriders.com team made it out to Southridge Park for the third installment of the California Golden State presented by Rock Shox.  The fourth and final round will be in Mammoth(!) Sep 4th-5th, hopefully we’ll see you there!

It was sweltering hot weekend, with temps in the nineties and shade a rare commodity at the top of the hill.  Thankfully Donny Jackson and the SRC crew provided free cold water at the top in addition to their usual excellent shuttle service.

In my short DH experience (3rd race), this was the most fun race course I’ve come across.  Out of the gate were about 5 log stutter bumps into a tight right turn followed by off-chamber rollers that encouraged you to air it out a little, leading into left/right combination.  Then into the first rock garden, which hit just right let you jump the first batch of rocks into a hard left over a few more rocks and then downhill into the first g-out right turn into a very loose, off-chamber section that you had to maintain your speed and line or risk being sucked into the loose talcum-powder dirt.  This was followed by a right into another g-out, left into a small rock garden that led to an optional pro/beginner split.  The beginner line was a tight left/right turn combination that demanded slow speed.  The pro line was over a large boulder with about a three foot drop on the back side, this was the fast line but the consequences were definitely higher!  Interestingly enough I saw people attack this obstacle as a roller into some of the softest, loosest dirt I’ve ever experienced!  I actually was afraid to roll it for fear of digging into the soft dirt and going OTB!  Instead I just pulled up on the bars, leaned back and gritted my teeth until landing in an explosion of dust!  After the drop was more talcum-powder dirt shaped into an S-turn that I washed out in on my first race run (2:31), I didn’t feel too bad as I saw this section swallow people whole as it gobbled on front tires.  Then you dropped into a hard-packed right turn g-out followed by a pair of turns into a small rock garden, then another large boulder drop/roller into three fun rolling jumps.  It was here I was having way too much fun (speed) in my second run (2:19) and was about as out of control as one could be over the third jump, I even skimmed the rear tire with my butt as I fought to not get bucked off this E-ticket ride!  Luck was with me and I proceeded to drop the hammer across the fire road, access road and cut the corner by hopping over the drainage ditch leading into the lower rock garden. 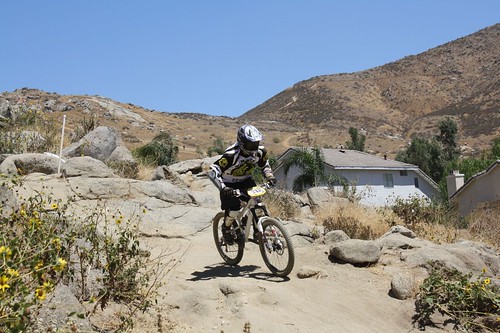 The lower garden was smooth and fun with a couple tight turns and rollers, but with nowhere near the carnage that it presents in most of the races.  In fact most of the spectators found high spots in the upper half to watch the soft-dirt eat riders up left and right. 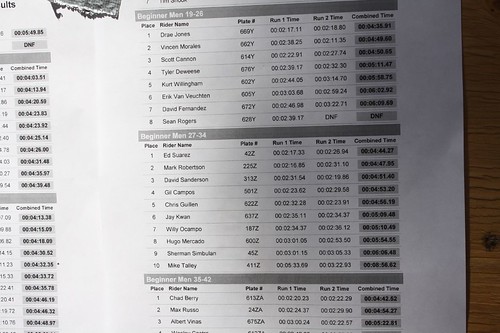 At the end of it all, I finally scored a podium finish, 3rd place in Beginner Men 27-34 with a combined time of 4:51.40.  Hopefully I’ll continue to improve and make it into the Sport class in time for the next winter series. 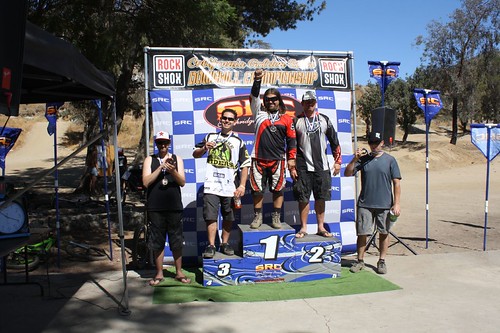 I have to thank Tony (The Wizard) for making it out to practice on Saturday and leading me on my last practice run, until I passed him… until he (taught me a lesson and) passed me back, Arrgh!  The Wizard has probably forgotten more mountain biking than I’ve ever known!  Riding with him and Kim “The Champ” has improved my riding dramatically (and made me appreciate the shuttle!).  I have to thank Moe for the carpooling and comedy (“Dad, I think I’ve got the black lung”), Joe for the good times, Albert for being a stud, Wes for the course knowledge, Kim for being Team Mom in RL’s absence and KHS for the Lucky 7 to ride.  I’ve beaten this bike up pretty seriously, but don’t feel too bad, it has beaten me up too, fortunately we both keep coming back for more! Evomo and Hoss for helping me with the shirt on my back, the shorts on my legs and Ergon for the hydration pack when I’m training (okay I don’t train, but I do ride regularly!), Serfas Optics for the super cool sunglasses and Sportlegs for the help recovering!