This past weekend was the Final round of the Shimano Winter Series. Although I havn’t been participating in this series, I made it out for the final race. Its been a few months now since the last race I did. The weather was forcasted to be warm. I wasn’t looking forward to doing the normal three laps in the sport class. I decided to enter the singlespeed class, hoping they would do the two lap format they have done the past few races. After meeting up with Team Boss RL, and Dan B, we geared up and got on the bikes. Dan was nice enought to show me the parts of the course I wasn’t familiar with. I have done a few races here at southridge, but none of them have included the Hide A Bike section. As Dan and I spun around the trails, he pointed out the others in the SS class. I’m not going to lie, I was a little intimidated by these guys. All the SS guys were lined up together, at the sound of the horn, we were off. As we rounded the first corner I was middle of the pack. A few racers were pulling away quickly, I jumped on the tail of that pack, and tried to hang on. 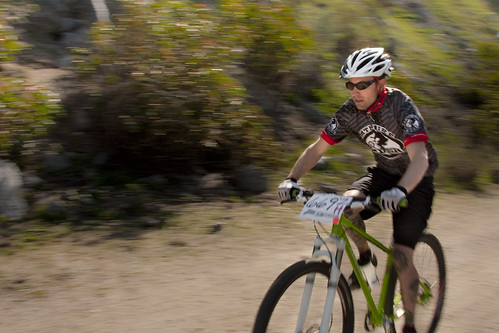 Through the front singletrack we were all pretty well lined up. At the first climb I thought I was in third. Then we hit the HAB! I dismounted and started to hike up, following a geared racer. Not too long after, he remounts his bike, not knowing whats ahead I do the same. 20 feet later he jumps back off, “What is he doing?” I think to myself. I jump off, take some big steps and pass him. I catch up to another racer and ask him how much longer? He says we are halfway up. I continue to follow him and we pass one of the guys in my class. After a few more minutes he tells me to jump on. We both remount, and I follow him down the trail. We hit another climb and he motions for me to pass. I get to the top and I remember Dan telling me to be careful on the way down. I kept on the brakes and took my time. This put me back to the paved road, now I knew where I was, and what I was up up against. I passed the watertower and looked back. A fellow SS racer was gaining. I pushed hard up the next climb and dropped in to the singletrack. After one more short up, I followed a group down the back of the hill. 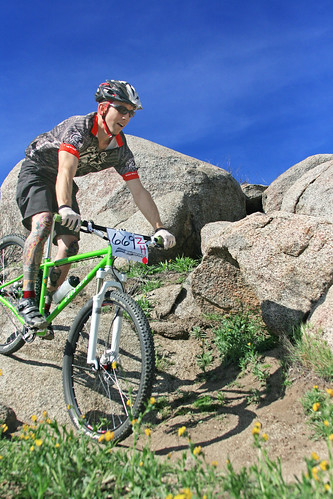 About halfway down I took one of the right turns to fast, I went off the course and had to bail off the bike. I was fine, just lost a little time. Next is a short fireroad climb. I felt like I had the perfect gearing, seated I spun by three of the racers running gears. A quick rutted out trail lead us down to the wash. This is where the Singlespeed is a disadvantage. This part is flat and long. I spun as fast as I could and down a gel to get some energy for the next lap. Next is a short, rocky, and loose hill. I NEVER clear this thing! I make it about 1/4 of the way up and have to jump off and run the rest of the way. I spin my way to the final drop of the first lap feeling stronger than I thought I would. 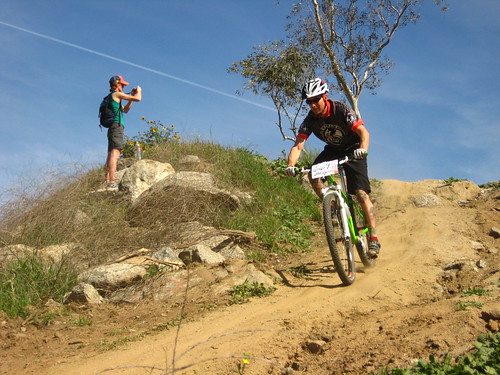 After weaving thought the tape, one lap down only one to go! as i start lap two, I hear someone yell, “GO HAMMER!!!” I look around but don’t recognize anyone. I think RL was hiding behind some rocks messin with me! As the trail doubles back. I see the same racer not too far back. I press on to the the HAB section again. Right from the start of it my legs are burning, and by this time its pretty hot. I had to stop for a few seconds to catch my breath at one point. Finally I reach the top and remount. I feel spent. I grind out the last of these climbs. 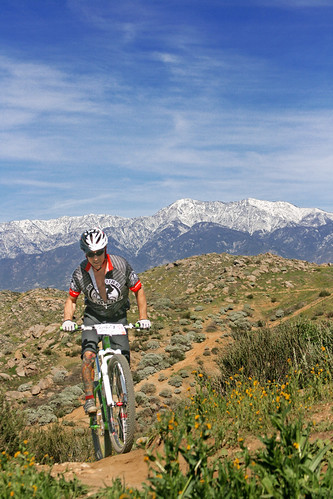 I shot down the techy stuff to the road again. I don’t see anyone behind me, so a back off a little. Halfway up the next climb I got off and walked. I think I was faster walking than riding this part. Down the backside I start to feel a little better. Once I am on the flat I spin as fast as I could, hoping no one is behind me. Once again I don’t clear that rocky hill… But that gel must of finally kicked in, cause I’m able to run up it. Looking back I still don’t see anyone. I roll though the final turns and finish. There was one racer I lost track of from the start, I wasn’t sure if he finished ahead of me, or if he was still out there. Later on I find out he got a flat, and didn’t finish. Once the results were up I placed first. 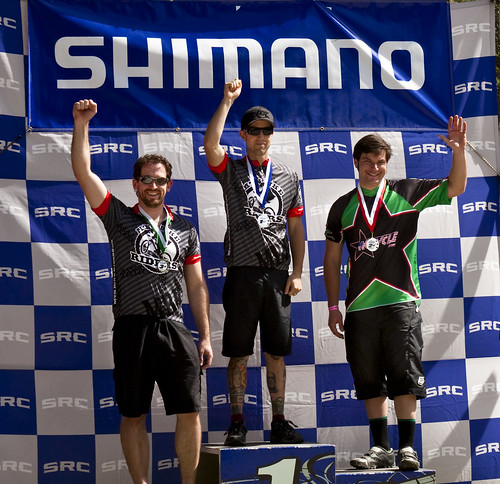 The bonus was Team MtnBikeRiders.com took two spots on the podium! Thanks to all our sponsors, Evomo Clothing, Ergon USA, VIP Energy Mix, Serfas and Dirty Dog MTB.