RL Policar-The Shimano Winter Series are 6 races that occurs every other week until March. So that means things happen very quickly and we never really get that much time to train, eat, write, sleep and poop. Which brings me to this next race report written by David “Sho-Nuff” Sanderson. Though David’s race was last weekend and the next race is this coming weekend, the dude is pretty reliable. If he says he’s going to do something, he’ll do it. So I better stop talking and let Sho-Nuff tell his story.

Almost everything is easier the second time around, racing included. For the second race of the Southridge Winter Series I was much better prepared. I arrived and prepped early enough to manage a half lap warm-up with the Animal who was kind enough to share tips with me on where and when to conserve energy during the race to ensure a successful finish. After riding about half a lap, Eric and I returned to the starting line at 9:30 sharp. Unfortunately things don’t always go as planned and due to delays, we end up waiting long enough for me to stop sweating before the start of the race.

I line up on the outside of the first row and await the call from Donny and Crew. Eric and a few others explode off the line. If The Animal is a grenade, my start is more a fire cracker but it’s still more substantial than last race. I’m running about 7th in the pack and I manage my goal of being able to see Eric as we get near the top of the water tower climb and the pack spreads as we enter the singletrack.

As I work my way through the single track I’m handed a gift as the rider in front of me moves to the side graciously lets me by, I don’t know if he’s blown-up or thinks I’m faster and I don’t ask.

I come up on two race course markers, one white and one yellow with arrows pointing in different directions. I should know which one to follow but up to now I’ve not paid attention as I never faced this situation and I chose wrong. As I descend I hear a course marshall yell that I’ve gone the wrong way. I brake hard, nearly go OTB and come to an ugly stop, followed by some remarks too ugly for this article I run up the hill and continue on my way. I’ve lost about forty-five seconds. 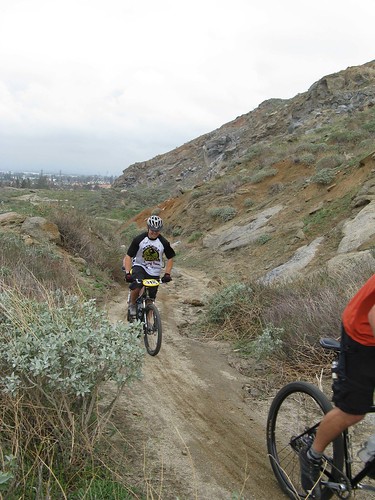 I’m managing my race pace much better today. Extra training (group rides with friends) at a harder pace is really paying off, until I meet the new section of the course. Donny and Crew have roto-tilled a new up-hill section complete with switchbacks in order to gain back about a mile and a half of last years course. This new section is filled with soft, moist dirt and I just can’t keep it together. I slide off the soft new line and begin to run up this section. I look back and I’m glad to see I’m not the only struggling through this mush, but I don’t know what those ahead of me were able to do. I remount and quickly remember the single track and concrete channel to come.

The new section has added a fair amount of flat trail back to the course which brings both blessed recovery between climbs and a new set of problems. My 32/18 gearing is great for climbing but not so great on the flat. I guess it doesn’t matter much anyways since I’ve only got enough gas in the tank to make the water tower climb three times with this gearing anyways. Out on the back straight I eat one of the gels in my pocket and hammer on.

I’m pleasantly surprised by the trail maintenance that has been done since the last race and the improvements in the rocky descent where I lost my bike in the last race. As I round back through the starting straight I see The Moe with his arms extended declaring touchdown with water and gel. I yell out that lap three I’ll need water as I’ve already consumed one of the two bottles I’m carrying (I make a note to only carry one bottle at a time in the future!). I sloppily toss my empty about forty feet from Moe (Sorry Moe!).

I make good progress to the water tower and as I climb I hear an unfamiliar occasional click from my bike but march on. I round through the single track and new soft section and the occasional click is now singing tenor in my ears. I look down at my now wobbly chain ring and fear the worst. Since I’m heading down hill I ease off the gas and let my momentum carry me while I hash out my plan. I pull to the side of the course find a horrifying sight! Two of my chain rings bolts have gone astray! I’ve never longed for a dollar’s worth of parts so badly in my life! I pull out my multi-tool and begin the patch job of placing my two remaining bolts across from each other, tightened as hard as I can. I’ve lost another minute! Looking down now at my significantly less wobbly chain ring, the clicking noise has subdued to occasional status. I’m riding fast but extra careful to spin and not hammer my fragile drive train.

I round the starting start and manage a decent hand off with Moe. I even toss my empty by him this time and proceed to lap three. You ever try to smoothly spin a hard climb on a single speed? It seems hard but really isn’t so bad. In fact I think it would be a great workout to add to my routine. Unfortunately, I’m racing at the moment but manage to keep it together all the way to the top. I’m confident in my drive train now as everything that follows is cake compared to this climb.

I manage to yell out encouragement to Kim as we cross each other on opposing single tracks. I even get to yell at Joe whose decided to enter XC along with SuperD this weekend. It’s really great to see my friends/teammates on the course and gives me just a lil’ bit more gas heading into the final portion of lap three. I see Priscilla as I near the descent in the concrete waterway to the lower level. I yell out “GO, GO, GO!” to which she smiles politely. I’m sure she said something too, but all I hear is wind noise and adrenaline at this point! The finish is near!

I finish with a race time of 1:41:45 and in third again. I don’t know where I’m going to find the ten minutes I need to lose to become really competitive in this class, but hopefully a few of them can be found in the hills of Turnbull Canyon and the XC smoothness of the Fullerton Loop because that’s where I’ve been this week. I’ll also make sure to tighten every bolt before my next race too! 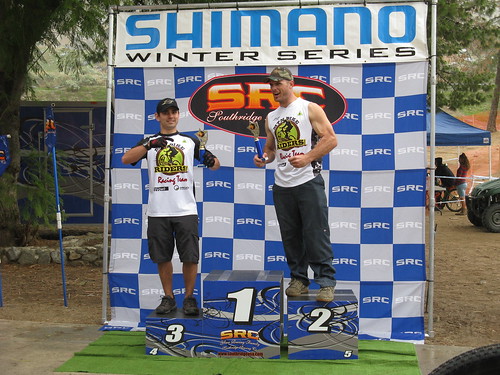 Due to the performance of the Pittsburgh Steelers, I will be racing DH in an upcoming Fontana Race! I’m not a Cardinals fan, but felt like making a bet with the Wizard, Tony Finch. Tony was rooting for Pittsburgh and agreed that if they lost, he’d enter a XC race with my corollary being a DH race.

In an effort to reduce my racing weight I purchased a Topeak saddle bag along with a couple water bottles and cages. This allowed me to race with a hydration pack which reduced my weight a couple pounds. The biggest benefit though was losing the hot spot on my back allowing my body to run just a lil cooler over the long haul. In my saddle bag I carry a tube, CO2 and a multi-tool. I’ve seen people do without the saddlebag and carry these items in their jersey pockets or duct taped to their seat posts! The point is, if you’re looking to reduce weight, don’t just look at the bike, look at the guy/gal on the bike too!