RL Policar: Up and comer SS racer David “Sho-Nuff” Sanderson does it again this weekend and is greatly improving. Read his race report and experience all the joys and pains that he went through this weekend. He did all that just so he would have something to say when his coworkers asked him what he did this weekend…”I raced” David replies (while puffing up his chest). “I raced REALLY HARD”

The sky’s been falling all over So Cal the past few days, dumping several inches of rain leading up to Saturday’s race and causing me doubts about the race conditions. Friday night it rained so hard that I thought to myself, that if it’s raining like this in the morning, I’m not racing! Fortunately I awoke to a light sprinkle, loaded up the bike and made my way to Fontana. I arrived to find RL and Jeremy already on the scene with the camp already set up, thank you guys! Eric (with a propane heater!), Moe, Priscilla, Kim and Tony soon follow.

I registered early enough to take a warm-up lap of the wet Southridge course. The soil in Southridge does well in the rain washing away the loose sandy top layer with minimal puddling. This provides excellent traction; in fact the traction was so good it felt as if I was running a harder gear ratio! This mixed with the extra cold air was sure to put what endurance I have to the test.

I arrive to the starting line to find a few unfamiliar faces with very large legs ready to race single-speed this week. Seems a few more serious cyclists are coming out of hibernation and preparing for their upcoming season. Christmas comes early as Donny informs us that were only running two laps this week (approx. 12 miles).

Donny counts down and we bolt from the starting line, I don’t know if I’m just properly warmed up, hoping to finish early or just getting faster, but I muster up a decent start. I’m too polite around the first turn and fall back several positions as I stick to the outside line. I manage to stay near the leaders through the early climbs as we make our way to the water tower climb. Here I fall back from the thunder thighs in the group and settle into my personal hell slowly grinding my way up. I manage to do a bit better than last week and can still see the leaders near the top. 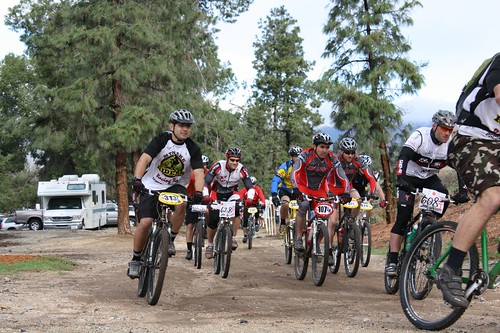 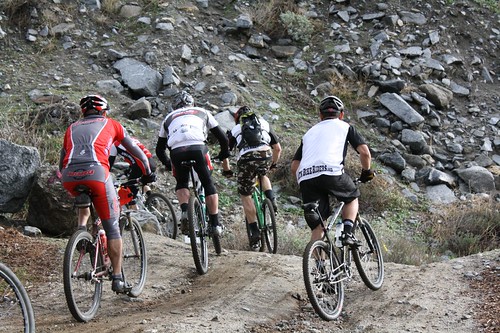 I’ve pushed too hard through this climb and my legs are burning bad. I’m breathing deep and the bitter cold air is biting in my lungs as my heart pounds out a rapid beat. I snake my way though some the short single track before ascending some of the brutal short and steep climbs that take us to the course peak. I’m nearly done, using everything I got to grind out this climb and debating walking, It’s here one of my fellow racers starts cheering me on, “You can make it! Just a lil more”! What a great guy! This is a thousand times better than the “Passing on the left!” that I was expecting, and is enough to convince me to push, if for nothing more than to avoid slowing him down. I don’t know his name, but I know the bike and I’m gonna make sure to thank him before the next race. 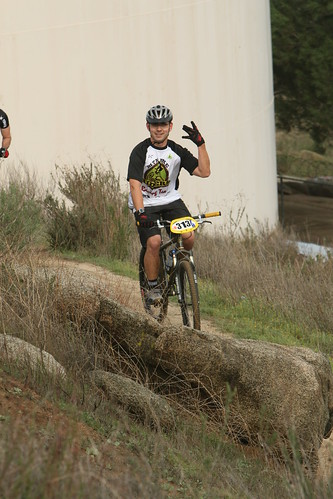 My favorite part of the course is here with the rolling single track equipped with several little berms. I rail through these as quick as I can remind myself of my mental notes from the warm-up lap. Some of the ruts have grown in size and one corner has eroded enough to present some dangerous exposure if you were to let your front tire run the corner too wide. I reach for my now missing water bottle and freak out! S&!^, I’ve got no water! Thank goodness it’s anything but hot today and I know I’ll get another bottle on the next lap. I take advantage of some of the lines I learned the preceding weekend riding with Priscilla and RL. I now know I don’t have to brake at all as I cross the first concrete channel, I can bunny hop out of the second channel and finally take the dirt alternate route instead of riding down the last concrete channel. On one of the last sections a spectator is yelling at me for ruining her photo of her friend who is behind me. I didn’t know I was supposed to let people pass me to make their photos look better. Her boyfriend is looking at her like he is in serious debate as to if he should continue to date her and I couldn’t agree more. I round my way be to the starting straight for lap two.

RL is holding GU but no water! He might as well be holding a plate of bacon at this point because the only thing I want in this world at the moment is water. He quickly grabs a bottle and gets it to me just in time. I try to resist the urge to immediately chug the whole bottle in an effort to avoid a stomach cramp.

I’ve noticed I really have two different mindsets when I race. One that is really focused and intense. The other is really loose and relaxed thinking of anything other than the race in order to help me ignore the burning in my legs. I spend most of lap two in this state thinking about what I’m gonna eat after this weekend and debating giving 4X racing a try. I stay in this state until my favorite single track section where I always smile as I snake my way around. I discover today that this right here, is why I mountain bike, to flow around and have fun. I’m dogging it, riding at my regular trail pace when I hear the team cheering from the finish line. I muster up what I’ve got left and pick up the pace for the final few turns and a race time of 1:04:46 and yet another third place finish. The Animal, Eric Hunner has 2nd with a time of 1:00:59 and winner Rod Leveque gets in under an hour (sorry I don’t remember his time, but the results should be on the SRC website shortly). 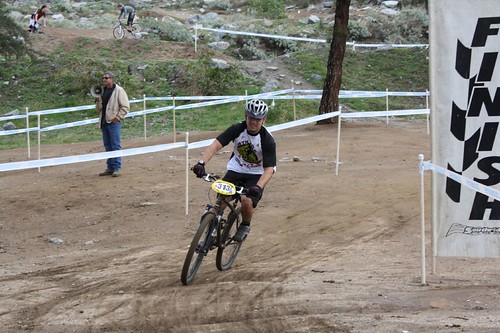 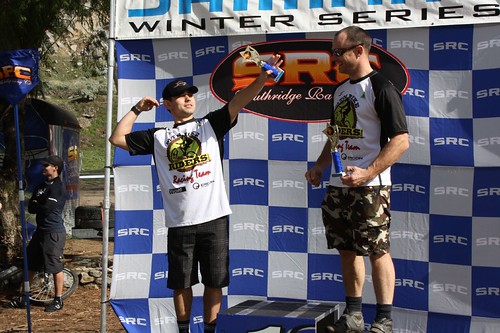 We head back to the team camp and I proceed to eat more carne asada than anyone has a right too. It’s amazing what a race does to my appetite! Thank you RL, no one can cook on an old portable propane grill like you can! 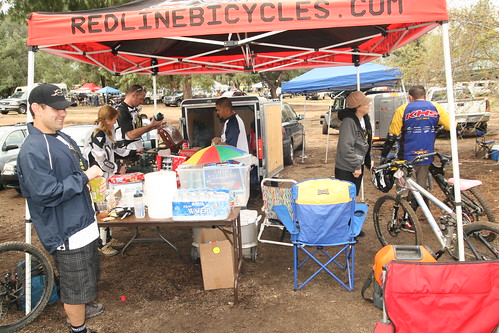 Also a quick thanks to the team sponsors Evomo, Hoss MTB and Ergon whose gear helps us get through our races and trail-rides.

I get some more good news! The better than good, rather great people at KHS have provided mtnbikeriders.com with a demo Lucky 7 that I’ll get to ride in the next Southridge DH race! This is a bike on my short list of possible upcoming purchases and now I’ll get to swing a leg over it and tell you what its like to fall in love all over again.