To put it plain and simple, it was wet and slippery. The whole weekend was pretty much soaked. During our practice runs it was a down pour. You could see the water stream through the rocks and single track. Fun fun fun!

As my category lined up, 200 Club, I had greeted my two other opponents with a cordial hello and wished them a good run. I have to tell you, these guys were big boys. Not fat or anything, but at least over 6’2, plus these guys were fast and skilled riders. 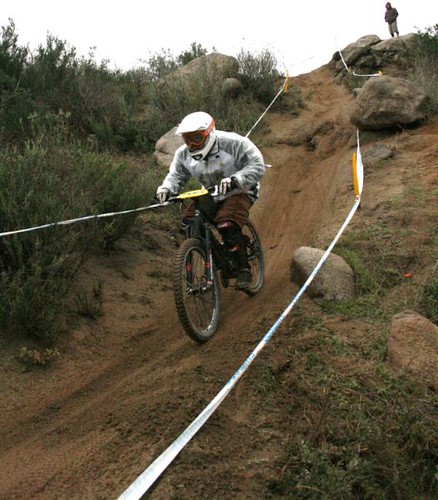 I’m off to a strong start, I make it through the first part of the course with out any issues. I then roll up into a section called “the saddle” and make a hard right turn. But my speed was too much and I go out of bounds and end up running over the course tape and eventually I get tangled up in it. The tape wraps around my derailleur and my cassette and it forces me to stop, get off and pull this stuff off.

Photo courtesy of Christopher Wood.
You can see how the tape is already wrapped around my derailleur pulley. 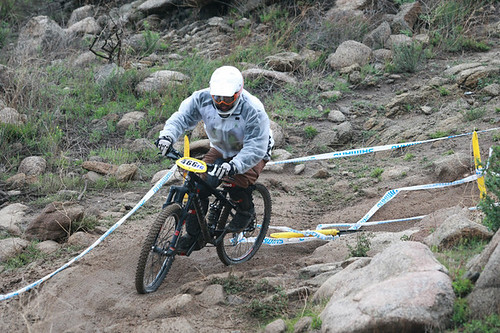 I quickly get back on the bike after losing so much time messing with the tape. I ride down one rock garden and hear the spectators cheering me on, but I hear one guy say “he’s right behind you!” ARGH! The anchor rider in my category caught up to me! Since I knew he was behind me, I mashed on the pedals as hard as I can, but this guy wasn’t going away, he eventually calls my right and passes me before the rock garden. But I try to stay as close to him as possible.

As soon as we hit the infamous WALL, I big ring it and start to pedal as fast as I could. But by this time my lungs are on fire and my legs were starting to sputter out. The guy that passed me was at one point only 10 feet away and I see him gas out towards the middle of the wall and thought that I had a chance of catching up to him. However, I had the same fate since I too gassed out in which every pedal stroke was in pain and labor.

He crosses the finish line and I cross it a few seconds later. I was spent…

We head back to camp and I was greeted by my lovely and awesome wife. She asked me how I did. I began to explain to her the tape issue I had up the mountain and my frustration showed through the tone of my voice. I still had remnants of the incident in my cassette…

Results were posted rather quickly, that’s because the Southridge Racing Company is the best at what they do. I ride over to the results and I see that I came in 3rd. The 2nd place rider was over 30 seconds faster than I was. Seeing those numbers made me even more frustrated with my run. Though my competition was super fast, I knew that I could have had a better run. But hey, you know what. I’m glad I came down the mountain in one piece, no injuries! 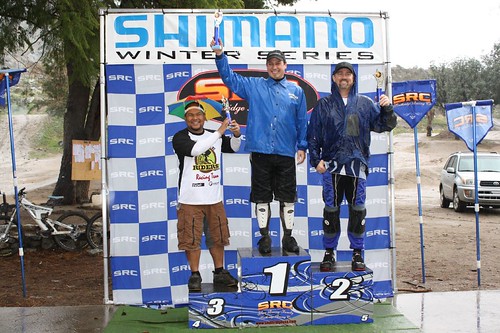 Seeing my new competition (they weren’t at the last races) motivated me to really step up my game. I must have spent hours watching all sorts of riders practice and race the course and I hope to take away something from each of them that I could utilize in my own riding style to make me better.

I’d like to thank our sponsors, Evomo, Ergon, Hoss MTB, BikeCommuters.com. I’d also like to take the time to thank Ibex Bikes for letting me race on the new 2009 Ibex Ignition Frame. 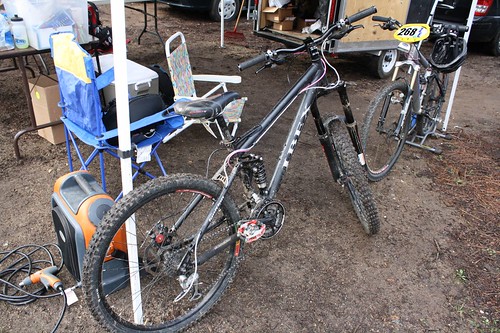