Art Aguilar and I had the pleasure in meeting with Brand Manager and ultimate cool guy, Jeremy Mudd. We talked shop about everything Airborne. But he made us pinky swear not to make some of the news public. Basically there’s some BIG changes in the line up that we’re super excited about. One of the things we look forward to is testing out the new Goblin. This came about because we mentioned that the our staff test rode 29ers during the Dirt Demo and we all had such great experiences with it. In fact it was Art’s first time on a 29er as well as Khoa and Lady P. With that in mind we’re hoping that we get the new Goblin in the next few weeks.

Jeremy also talked about the highly anticipated Toxin and the new Taka…yes I said new. Another bit of news that we heard that we aren’t allowed to divulge is this…ready? Airborne is coming out with…Doh! I can’t say! I made a promise. I’ve already said way too much. By the way, we wanted to congratulate Jeremy on his awesome weight loss. Did you know he dropped 40lbs! 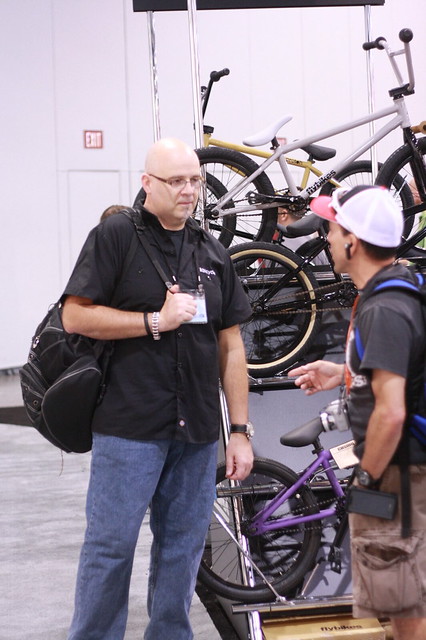 He started eating right and riding more and magically that worked! I was very inspired by his progress that I made a promise to him that once Interbike is over that I’d get on my weight loss regimen once again. It was great to see Jeremy, kinda bummed that Eric McKenna couldn’t make it out, but I guess someone had to run the Airborne World HQ during the week of Interbike.