Scissors and I picked up our Specialized steeds, the 29 S-works carbon HT for Scissors and 29 Epic FS for me (first ride reviews will be coming shortly). As we were heading out to the trailhead, who did we spy? Gary Fisher himself and Laura of Momentum Magazine. 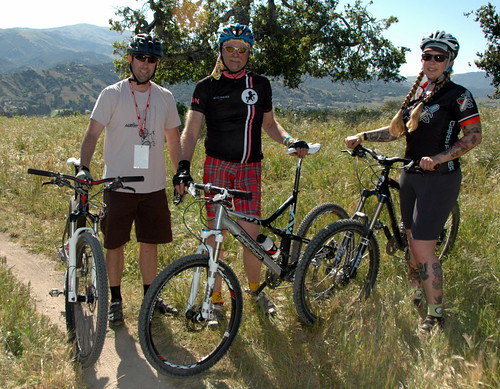 The Pro XC men and women were racing on part of the course that we wanted to ride, so we had to detour around until we found another entrance. The detour took us through Bicycling Magazine’s campground where Gary Fisher was camping. Turns out that on Saturday night, Gary slept out under the stars with two Coleman sleeping bags.

Scissors and I ended up hanging with Gary and Laura for the 45 minute ride. Laura was a champ. She was riding a 26″ (her first problem… it wasn’t 29″) Ellsworth BIG travel bike that had way too much travel for the trail. But, Laura had a great attitude and never backed down from the challenges of climbing or descending on the bike. This was especially impressive considering it was her 2nd mountain bike ride, ever. Laura is an avid biker in general, just new to the mtb scene.

Gary… well, he still has it. He was standing up on all of the climbs attacking and conquering them as if they were flat paved paths. Good fun to tag along with him for the ride.