Yesterday was my berfday, thanks. I am 31, but feel like I’m 18. However, my joints say I’m 60. Originally I hadn’t planned on anything for my bday. Moe was just going to come over to hang out and play Guitar Hero on his Wii. As I got home, I noticed that there was tons of food Priscilla was making, plus TONS of beer and pizza. At one point I say to her….”um isn’t this allot of stuff just for Moe and I?” She comes up with some excuse why she bought so much food, like “beer was sale…” But I knew that New Belgium Fat Tire never goes on sale…I shrug my shoulders and says to myself, “cool, that means I’ll have more to drink later!”

When Moe and I had talked earlier in the week, I told him to come by around 7:30-8pm. But he was already at my house at 7pm…wow that was weird…him being a Messican, I thought he would have arrived at least an hour later…

After Moe arrives, one by one, more friends started showing up. While they’re walking in, Priscilla yells…”Surprise!” Eventually some of my friends from church and the rest of the MtnBikeRiders crew show up(minus Khoa who was nursing a flu and Randy that was in Az.)!

I was really surprised!

I received some of the coolest gifts for my bday. First of all, Priscilla and my two daughters got me Guitar Hero for our PS2, my oldest daughter gives me a super cool Starbucks mug, then Moe gives me the Guitar Hero 1 game, Lance brought New Belgium 1554 and the Snow Plow beer that he reviewed on the site, excellent beer by the way. Couple of other friends bring me some gift cards for Pick Up Stix, (Thanks Jeremy!) and one for Jamba Juice(Thanks Ben!). 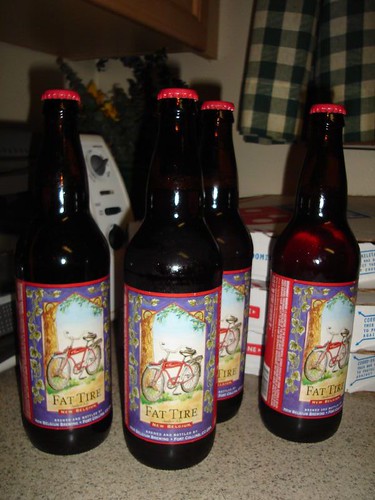 While we’re eating beer, pizza and salad…guess who shows up? Vince Rodarte! Vince hands me my present! Big ol’ bottles of New Belguim Fat Tire, a Pedro’s bottle opener, which by the way you can install right onto your water bottle mounts on a bike! Plus single speed cogs! Wow, this guy knows how to woo a fella! 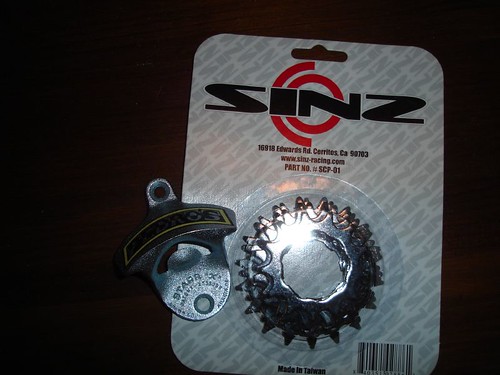 Through out the night we all took turns playing the Guitar Hero. Some guys like Lance and Jeremy said…”oh I’ve only played it a few times…”I call shenanigans! First of all, we were all playing the “easy” version of the game, but Jeremy…goes up to Hard or Expert or what ever level it was that none of us could do. 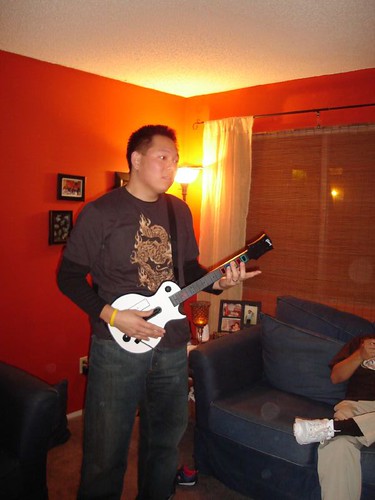 Then there was Lance. He was really humble about playing the game and said that he’s only tried it a few times. But as soon as he got the guitar…BAM! You’d think he was the Irish version of Jeremy….daaaaang! This guy was good! Even Amanda (wife) was all googlie eyes with him after each game. 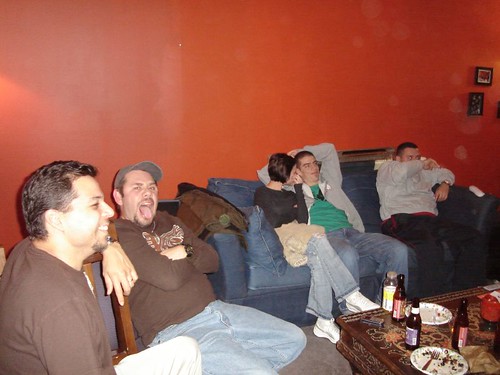 After a few beers and slices of pizza, Vince R. figured he’d give this thing a try…He kept saying something about, “I need more beer, it helps me focus on what ever I’m doing…” 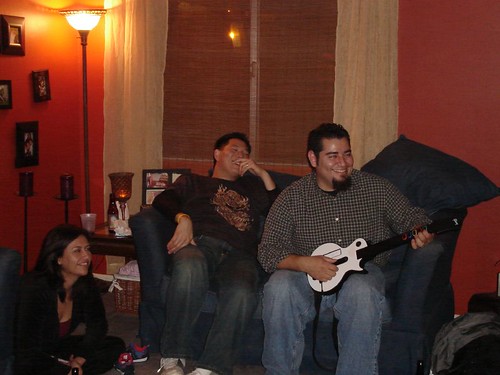 He did pretty good considering he’s never played this game before.

I had a few turns on the guitar, but mind you, I’m no Moe. Not only do I look like a retard in this picture, but anytime I tried to do anything fancy like a leg kick, jump, dance or anything…I’d mess up! 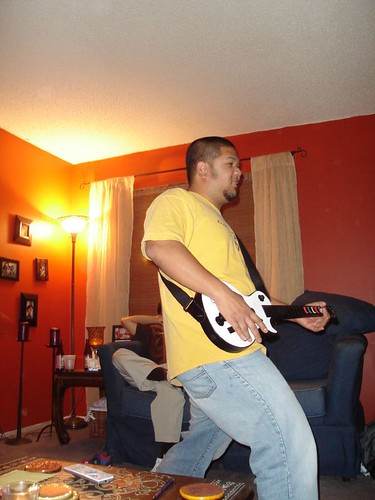 At one point Moe was playing this really hard Slayer song. He was hitting each note or button that was on the screen. He was pretty focused, you might even say that he was in the zone. Everyone was cheering him on….then it happened…the TV turned off all by it self! I have NO clue how that happened? We were all bummed out that Moe couldn’t finish his game…

Anyhow, this was a GREAT berfday partay! I didn’t even know Priscilla was planning this. None of the guys leaked out any clue about this somewhat of a surprise birthday bash. I’d like to thank everyone that came over and of course all the presents, Vince I’m going to install that bottle opener on my bike today! Thanks again to Priscilla for setting all this up!