On my way home from work, I got rear ended. Right after he hit my car, I signaled for the other driver to pull over so we can exchange information.

Then the knuckle head takes off! As soon as he does that I get on the phone with 911 explaining to them what just happened. I was pretty pissed and knew that this guy didn’t have insurance and that’s why he bolted. So I gave chase!

He tried to speed up, but since he was driving a beat up 80’s Dodge Caravan with wood siding…plus his radiator was damaged, I can tell because of all the fluids coming out of the front end of his car. However, my little Hyundai was pretty quick and I caught up to him. He then gets on the 55 South. I try to follow him, but he kept weaving in and out of traffic as if he’s trying to lose me.

This is a similar style of van that hit me, but all beat up.

He then exits Dyer West, then makes a right on Grand. While he’s on Grand Ave. I’m still on the phone with 911 trying to give them his license plate info. Then the idiot is trying to lose me as if he’s in the TV show Dukes of Hazard by swerving left and right and THEN, he SLAMS on his brakes! Trying to get me to ram into him. But as soon as he hit his brakes, that got me close enough to get a look at his plates. I give the 911 guy the info, I’m hurting from the impact, I tell the guy that I’m going to back off because now we’re entering a bad part of Santa Ana, you never know if he’s going to do something stupid. I pull off into a parking lot, wait for the California Highway Patrol to show up. I then asses the damages. First I check myself out, my back is wicked sore. I call Priscilla to let her know what just happened. I was till amped up on adrenalin, so I’m sure I sounded like a mad man.

I check out my car, and see that this douche bag did some damage. On this photo, you can tell that my trunk/hatch on the right side has a bigger gap than on the left. 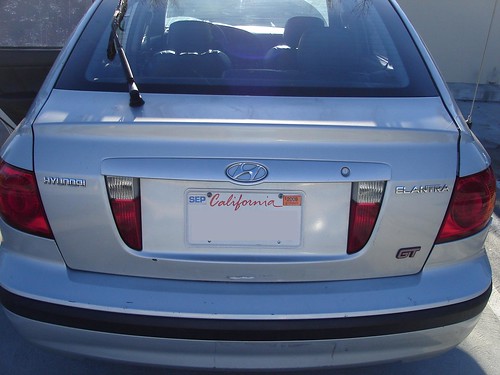 On the middle of the bumper you can tell where his license plate had hit me. Underneath the tail light you can see some damage. 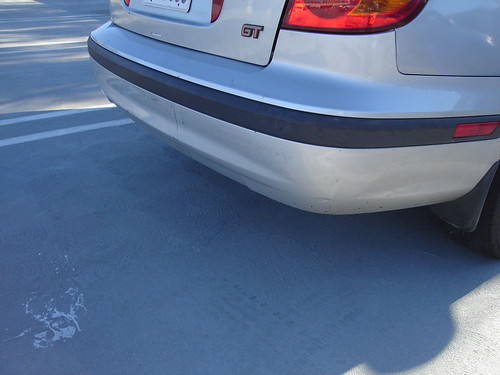 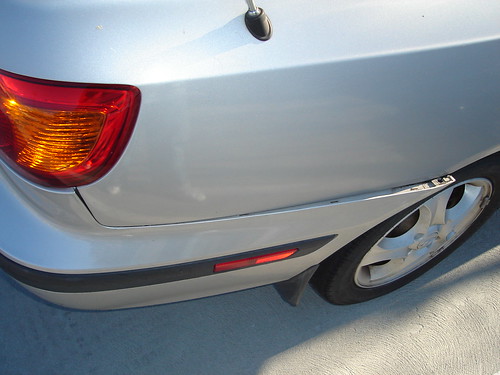 I’m no auto collision expert nor a Claims Adjuster, but guessing from what I can see, there might be more damage underneath the car bumper cover, which could explain the misaligned trunk/hatch. I’m just pretty lucky that I’m ok. The car is fine…ofcourse it is! It’s a Hyundai! But my back is pretty sore this morning, but nothing that a few Motrins can’t fix…temporarily.

Mountain Biking Terms-“Pin it!” and “Get some!”