Not too long ago, Priscilla received a set of the Bengal Brakes. The brakes work well, but since she’s got dainty little hands, she had a hard time grabbing the lever. I honestly thought that the levers were not adjustable. So sadly, Priscilla rode with a stock set up and at times having to struggle on getting her fingers on the lever.

Luckily we have Jeremy and our buddy Tim Scissors that we could turn to for help with hydro brakes. In all honesty, I don’t use hydros too much so that means my time with them is limited. I like mechanical disc and vbrakes…Anyhow during last week’s ride, Priscilla had mentioned to Jeremy and Tim that she was having a hard time with her levers. (I was at another trail with Moe and Joe) They immediately jumped on the opportunity to help out. Both of them had told Priscilla that her levers were fully adjustable. With a simple turn of a 2mm(I’m guessing) allen, her levers were at a position where she could easily grab them. 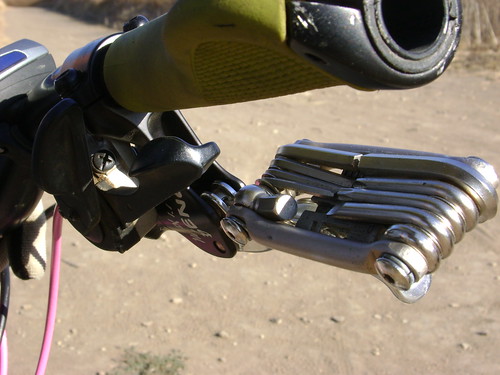 I think they were taking apart a multi-tool in order to use the allen key. 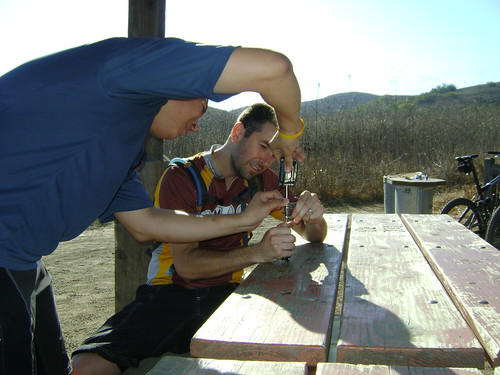 After the quick adjustment, Priscilla was back on the bike and from what she tells me, she’s now more confident on bombing down the hills since she knows that she doesn’t have to worry about her brakes! With that said, I’d like to say thanks to Jeremy and Tim for helping Priscilla out.