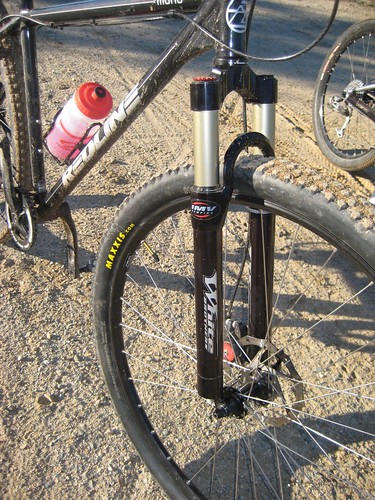 This is just a quick update on the White Brothers Magic 29â€? 80mm fork that Iâ€™ve been riding on for the past 2 months. The initial break in period for this fork is said to be about 10 hours. After a little more than 10 hours of riding I either got used to the fork and its tendencies or the fork really did break in and start playing nice. Iâ€™ll vote for the latter mainly because this fork has become exactly what Iâ€™d want in my 80mm 29er fork.

Iâ€™ve been pretty excited about the White Brothers Magic 80 fork for three reasons: 1. its lateral stiffness, 2. it is not buttery soft and 3. it does not exhibit much (if any) bob. Since this is not a full on review, Iâ€™m not going to go into the â€śwhyâ€™sâ€? of these factors but I am however going to mention something that Iâ€™ve been thinking more and more about as I ride this fork. I like to think of the WB Magic more similar to a rigid fork than to a soft and supple suspension fork.

Hereâ€™s why: in my experience a soft and supple suspension fork tends to be a little less stiff laterally and more prone to moving off the line youâ€™ve chosen. They also have some pedal bob but they are excellent at getting rid of the small bumps and making the harsh trail disappear underneath you. The WB is almost the opposite of these traits making it kind of like a rigid but having some suspension for going through the tough stuff. Exactly the way I like my suspension fork to be.

A more complete will be forthcoming. In the meantime, if you’re interested in the White Brothers Magic 29″ 80mm, click here.