After joining Southridge Racing Co (S.R.C) beginning of 2008, one of the things I was looking forward to was the Member Awards held at the end of the year.  As a member of SRC, I raced most of their events in Fontana.  While the majority of the SRC races are held in Fontana, CA, and a few were outside of SoCal.  There were a total of ten SRC races through out the year.  In these races, you would accumulate points that are tallied up at the end of the year.  Points were given to 1st – 5th place, for each class and category (Pro, Semi-Pro, Expert, Sport and Beginner). 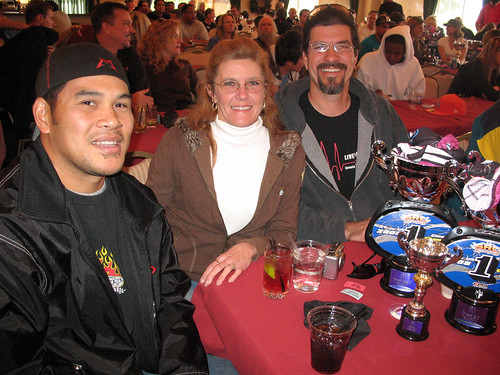 Me, Kim and Tony

Racing Clydes for 2008, I accumulated enough points to place 4th overall for 2008.  On Sunday Dec. 14th the awards banquet was held at the Indian Hills Golf Club.  I was joined by two of my team mates, Tony and Kim Finch.

Needless to say – Kim was smoking the competition for 2008!  For the 1st Place winners, they also received a Winners Jersey in addition to their big cup (trophy). 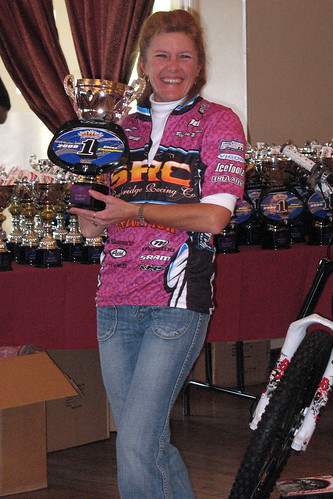 Kim with one of her 1st place trophies.

Other than the awards, the other exciting part of this event are the swag or raffle prizes.  At the door all members were given two raffle tickets.  The prizes ranged from socks, tools, tires, shirts, saddles, pedals, disc brakes, derailleurs, wheelsets, helmets, forks, travel bags and bigger prizes like a KHS Lucky 7 complete bike and a mini-moto bike. 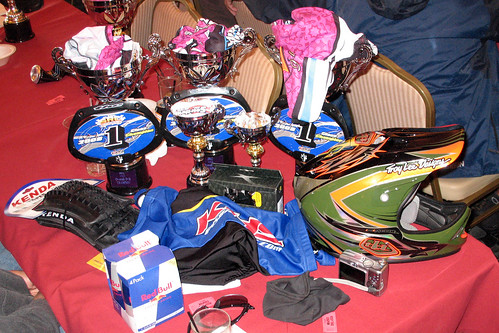 Our trophies and goodies.  Check out Kim’s 3 1st place trophies!

With at least one hundred participants, there were enough prizes for everyone…and good prizes they were.  I won a TLD D2 helmet, Tony won Kenda El Moco tires and tools.  Kim won Shimano XT pedals and a KHS cycling pants.  Only problem is they were XXL.  Towards the end when the event was winding down, the next prize up was for an XTR wheelset.  They were calling out the number and it was one digit from my last ticket…ugghhh.  The kid who won it had previously won another wheelset earlier in the afternoon.  Never the less, I had a fun time. The Awards Banquet was well worth joining the SRC beginning of the year. 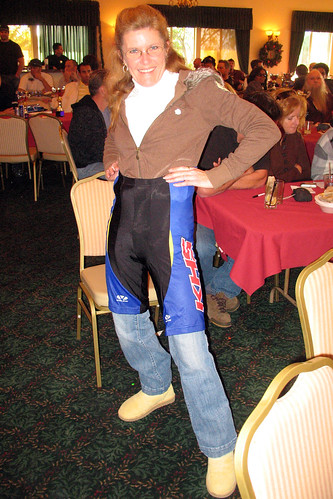 Kim sporting her KHS shorts.  Any takers? Only worn once… 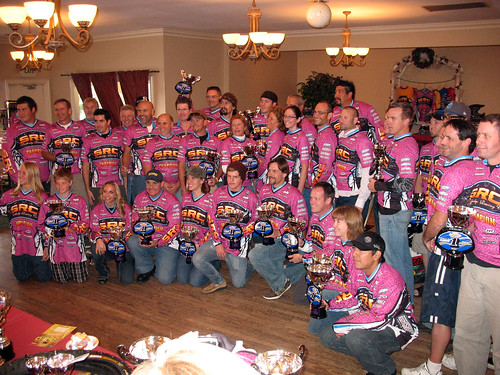 Congratulations to ALL of the 2008 SRC 1st Place Winners!

Team MtnBikeRiders did pretty well taking home 5 trophies!  I’m sure we’ll be gunning for more in 2009.