I had super long week that started with Sea Otter and ended with some business travel to North Carolina. I finally came home on Friday night and was looking forward to some weekend riding. I sent out my usual email telling people about a trail I had planned on riding. One of our riding buddies, Dan B. told me he’d meet me at the trail the following morning.

After climbing up Cholla, Dan and I rode down a fun trail called Lynx. This trail offers fast rolling descent as well as small portions of rock garden. By the way, my weapon of choice was the KHS XCT 555…sweet bike. 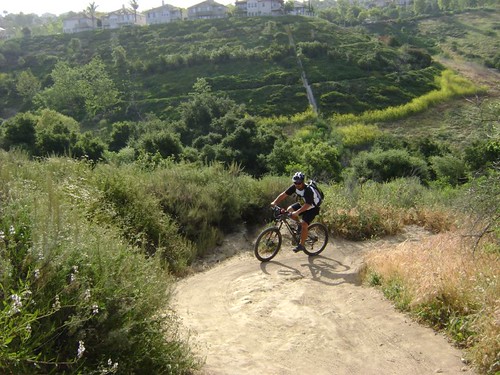 We then headed back up Cholla and while Dan and I were on a photo break, guess who rolled around the corner, The Animal-Eric Hunner! We chit chatted a bit and then we continued our ride. I swear, Eric is one strong rider, Dan and I watched in amazement on how Eric sprinted up the hill on his single speed as Dan I labored with our granny gear…

After going down a fun rock garden, we stopped at the same spot where we first met Eric over a year ago. While we rested, a couple walked up the path and started talking to us. The gentleman stated that they had a hard time walking it and said that it would be nearly impossible for us to ride it.

If you didn’t know this about Eric, if you say that he CAN’T do something, he’ll set out and prove you wrong. Once he hears someone say that, he’ll say, “Sounds like a personal goal…” then he’s off to do it.

At this point, Eric rode down the hill and back up just to show the couple he was able to climb it on his single speed… 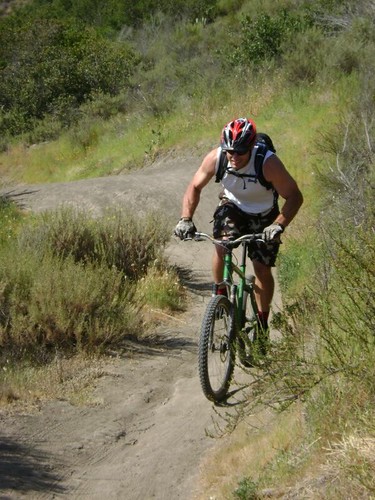 We then stopped at Dripping Caves to take our mandatory group photo. 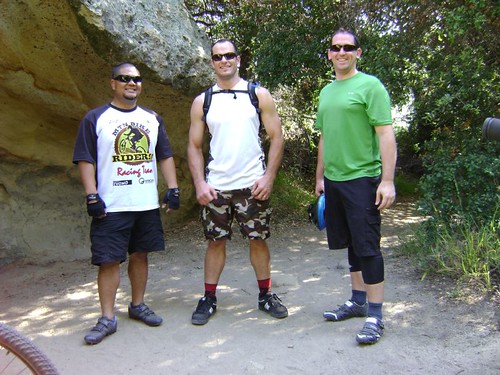 All in all, a great day. I was super happy that I had a chance to go riding. I love Aliso Woods because it offers so much fun trails. Kinda makes me wish I lived closer to it. Thanks again to Dan and Eric for being part of the ride.

What Does Turner Bikes and Evomo Clothing Have in Common?

Importance of a pre-ride meal.