Approximately 6am Sunday morning we got up to get our day started.  We had a full day of racing ahead of us, especially with the Two-Run format.  We had a quick breakfast at the hotel where we were joined by Kim & Tony, then repacked my truck with our gear and bikes.

We arrived at Woodward West shortly after 8am and practice had already begun.  Practice was for only two hours then they would have to clear the course for the start of the race.  The Moe and I suited up and headed to the top via shuttle.

Looking back to my practice runs on Saturday (3 total) I did fairly well.  As I described on the previous post, we have to go through two small rock gardens – one at the start and one towards the middle of the course.  My problem was the first section… much like my previous races in Fontana, I have the fear of these rocks.  During Saturday’s runs, I could not get myself to go over the first section.  With the coaching and encouragement from my team mates it didn’t help.  What’s strange is the first section is very similar to the second rock garden where I just plowed through the middle…

Back to Sunday… geared and ready to go, off we went on our first run.  Approaching the first rock garden I chickened out and stopped just short of it.  I walked over it to find my line and hoped to go over it on the next run.  The rest of the run went smoothly despite some of the turns and corners being chewed up.  Second run the same (as the first)… out of time for practice, I never got myself to go over the first rock garden. 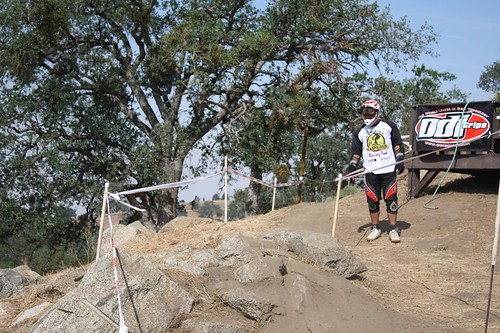 Overall I was very comfortable with DH course except for that one section.  As the race started with the Pros (and the rest of the categories), I watched as they flowed through that section.  Obviously the Pros and others with jumping capabilities picked a different line; they jumped over the rocks and made it look so easy.  I was trying to convinced myself to just go through it like the others and I’ll be fine.

1st Run: I was 3rd in the seed list and will be following The Moe.  Up on the ramp I was ready…just need to get through one section and it’s all gravy.  As Donny counted me down, 3,2,1… 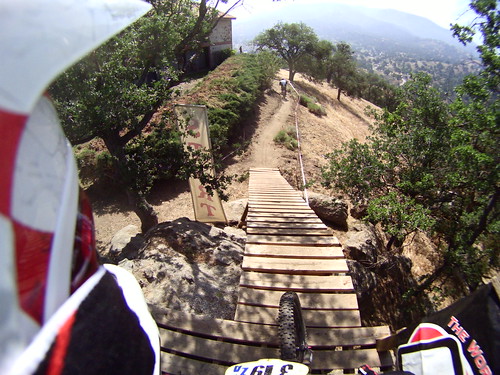 View from the top as The Moe starts his run

I rolled down the ladder onto the course.  It starts off on a singletrack then up and over a boulder, no problem.  As I approached the first rock garden I see an opening on the left side of the garden.  Between the rocks and the post holding the tape for the boundaries I shot through this section totally avoiding the garden…whew I made it.  No harm no foul, I stayed within the boundaries.  I made my way down the S-turns, towards some fast corners with berms.  As I approached the table tops, I started scrubbing some speed. 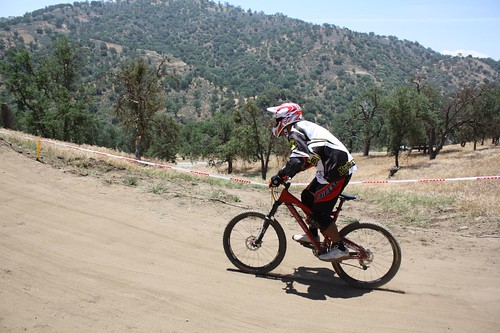 Now I’m not one to jump; like Sea Otter I rolled/pumped through these sections.  I’m sure I would have gained more time if I learned how to jump, but for now, this is how I roll 😉

I rolled through the second rock garden successfully but at some point my feet became unclipped.  For the next three jumps I was bouncing up and down on my saddle trying to get my feet together! (see 1st part of the video) What the @#$%!  This was a terrible feeling not knowing where your pedals are.  At the same time unable to pedal and losing some time.   I finally got my footing and finished the run.  Disappointed as I found a way to get through the one section that hindered my practice runs and something else slowed me down. 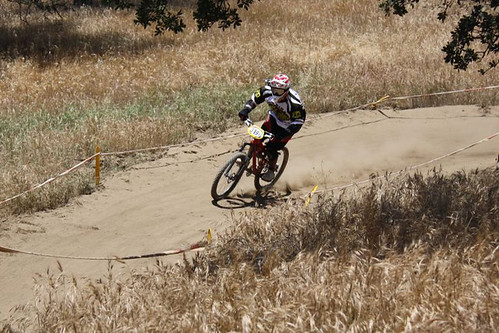 During our wait for our 2nd run, they posted our time.  I was currently in last place.  I had plenty of time to review my last run.  Disappointed at the loss of pedals I was determined to do much better than the last.  Also now that I knew that I can squeeze by the first rock garden I was much more confident.   My goal now was to better my previous time.

2nd Run:  At the top of the ladder, I was poised and eager to do my 2nd run.  As Donny counted me down I rolled down the ladder and headed towards the first rock garden.  Same line as the last, I actually heard someone comment as I passed that it was a good line.  With much more confidence I felt good on the course.  My feet and pedal stayed together through out my run.  At the end I felt good and I was able to better my time.

I finished 5th overall.  With my second run, I was able to edge out The Moe.  It wasn’t an easy task as he was riding really well that day.  I need to go on a “learn how to jump” clinic.  I can definitely use it.  Check out the video from my helmet cam.  I’ve added the segment where I lost my footing. 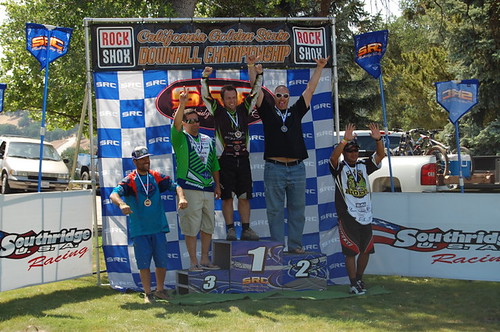 I also want to send healing vibes to our friend Wes Castro (also in our Class).  At the end of his first run we watched him crash at the Finish Line.  Approximately 15-20ft before the Finish Line is a jump/kicker; many were launching off this.   Wes took this jump; he looked good until his front end started pointing downward… Wes endo’ed and crash at the finish line.  Fortunately he was able to get up and walk away from it.  As a matter of fact he finished 4th in our Class.  Get well and congrats! 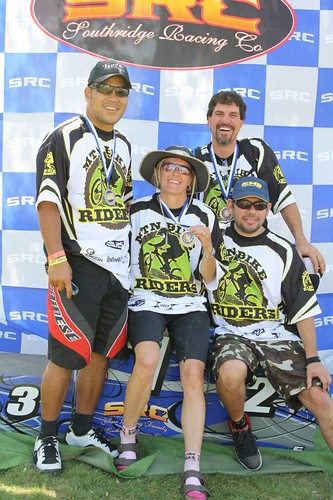 I had a great time at Woodward West.  Racing is so much better when you are joined by great friends.  Many thanks to our sponsors KHS, Hoss, Serfas, Evomo, Ergon and Bike Commuters.com.  Also thanks to Roy for taking pictures.