Moe, Khoa, Romanian Thunda’ (Gabe), RL, Priscilla and Randall. Jeremy was there last night, but met us at the movie theater. 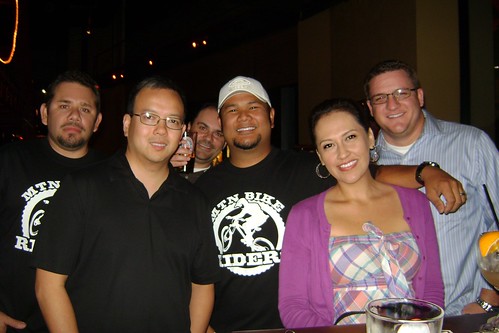 I say the biggest because I’ve yet to see a movie/film/video go through a “National Showing” of this magnitude. Race Across the Sky was geared to showcase the two main “characters” in the movie, Lance Armstrong and Dave Wiens during the Leadville 100 of 2009.

So lets get down to the nitty gritty. Fantastic cinematography! HD quality, lots of overhead-aerial shots, great music score and I loved the side stories they showed. As impressive the race was between the pros, I was more pulled in by all the stories of regular folks trying to finish this race. At times the movie was very emotional and I even felt like I could relate to some of the people they showed.

Two particular situations in the movie, don’t worry I won’t give all of it away, but there was a couple. She got into an accident, and the husband rushes over to her, only to find her laid out in the middle of the road. He basically thought she was dead. Anyhow, that whole story of this couple really tugged at my heart because I wouldn’t know what to do if I Priscilla got hit by a car like that person did.

The second heart tugger of the movie was this guy from Denver who had been racing in the Leadville 100 for the last 15 years. He had a great heart about him, and check this out. While all the other racers were decked out in lycra, carbon bikes and all that. He shows up in a Dickies work shirt, 90’s style helmet and a 90’s style AMP Mountain Bike (Tony still has one!). This guy finished the race and he was smiling the whole time.

Ok I think I’ve said way too much about the story line, but if you were to ask me, “was the movie good?” I would have to say, yes! Again, the footage was awesome, stories were great, but I would have liked it more if they had more of those.

I’m really hoping this movie will come out on DVD, that way more people can see it. Last night’s event was a “one night only” kinda thing. Even though it showed in theaters all over the US, not everyone had access to it in their local area.

So if you missed it, keep checking their website to see if they’ll do another showing, if so, GO! If not, wait for the DVD to come out. You don’t even have to be a racer a racer to appreciate to appreciate this film.

6 thoughts on “Race Across The Sky-Movie Review”