Meet my brother Staff Sgt. Randolph (Randy) Policar. He’s in the Army. He’s some sort of Jump Master and he’s also in the HALO programalso known as Military Free Fall..

Part of his daily job is to jump out of big military airplanes high above the skies, around 12,500 feet. He’s been in the Army for at least 14-15 years and has tons of jumps under his belt. One of the things I asked my brother was, “Don’t you get scared or nervous before jumping out?” He replied with a very cool and simple, “yeah.” He then went into great detail how he overcomes his anxiety before and during the flight up to the drop zone. Want to know what he said? “Smile!”

So why am I talking about my brother and smiling. Well its simple really. You see when I first started downhill racing, my nerves would be all messed up. I would get nervous and during my race runs I’d make simple mistakes that cost me time. Since I had this pre-race anxiety, I called my brother for advice. I figured the guy did something far more dangerous than downhill racing. That’s when we told me to smile. It took me a while to get used to the notion of smiling during practice and race runs. But here’s something that I discovered. When I would try to get into the zone or focus too hard, my body would stiffen up, my grip on the bars were too hard and my reaction time was slower. But when I started smiling more, I noticed I was more limber, reaction was way quicker and I ended up having more fun!

Don’t get me wrong, this smiling thing isn’t just for downhill riding/racing. This can be executed when tackling a technical XC trail. Just check out the big smile on Priscilla’s face while racing Super D. 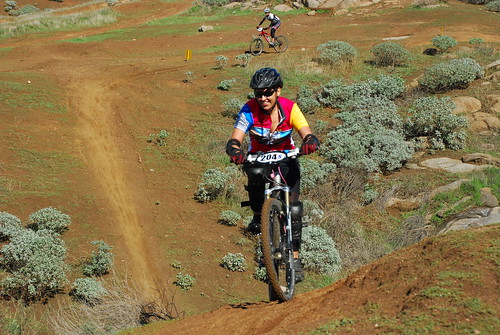 Try it today, try smiling as much as you can while riding, and you’ll see how that translates to your experience.

It’s time to move on

11 thoughts on “Remember to Smile”