Editorial-RL Policar: Justin Beerit does it again with this India Pale Ale. I just love the guy on the packaging…

Fourth of July weekend is the perfect time for the drinking of beer. I mean, what goes better with fireworks than beer? Bourbon? I can’t really argue with that one. “Safety perhaps?” you might be thinking, but safety is for eggheads and people with sense, and I’m neither of those. I prefer my fireworks much like I prefer my cookouts and job, accompanied quite nicely with beer.

We planned on heading up to The Canyons ski resort in Park City to partake of their July 3rd concert and fireworks celebration (July 4th fell on a Sunday this year and it’s a big no-no to have any kind of celebration or holiday on the Sabbath, don’tyaknow). So, it seemed the perfect excuse to head off to the State Liquor Store for some libations.

I scanned the beer section. The usual suspects stared back at me: overpriced imports here, some overpriced domestics over there, a section of overpriced local stuff over in the corner (everything’s overpriced in Utah what with the 60% sin tax). I paced around the section when I saw something that looked unfamiliar. Summer Grifter IPA from MacTarnahan’s Taproom out of Portland, Oregon. “A deliciously wayward ale, lurking wherever thirsts gather ,” the six-pack read. A skeevy dude with a black eye slouched under the name. This is the beer. Perfect for a warm summer evening of music, food, and fireworks! 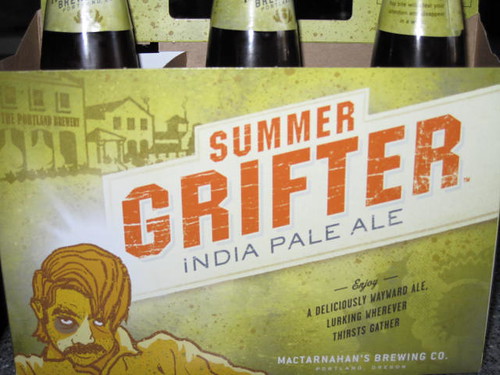 We settled into our spot up at The Canyons. Thousands were streaming in. It could tell it was gonna be a sardine fest. We’re gonna party like it’s 1879 (it is Utah after all). I pull a bottle of Summer Grifter out of the cooler. The first smell was crisp and piney. A refreshing smell, if you’re inclined to like hops. First taste was bitter, then mellowed out into a nice maltiness. Exactly what one would expect from an IPA, and perfect for a summer afternoon.

It was difficult to discern the appearance of this beer as it was partaken BBQ style (in the bottle); however, the mouthfeel was exactly what one expects from a hopped, moderate alcohol beer: bite followed by the tickle of carbonation. It felt thin in the mouth, but pleasant. 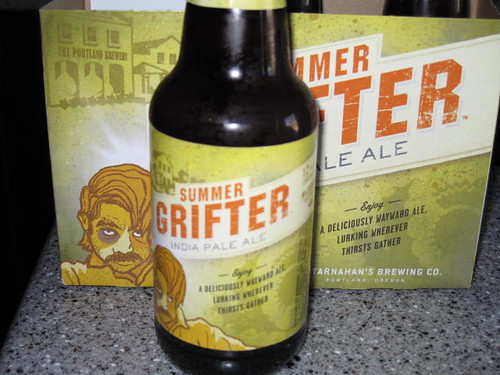 The concert started. It was a band called Disco Drippers and they played old disco songs. Oh well, it was a family event. The green area was packed with people. The sun set. The temps began to drop. I opened another beer. This is a very drinkable beer. The hops aren’t too overpowering (and tend to mellow with each beer as your taste buds get used to it) and the alcohol is relatively low for an IPA. I tested the drinkability hypothesis one more time. Then again. Yes, it is quite drinkable.

The concert ended, the fireworks began. It was our daughter’s first fireworks. She was rather unimpressed. Oh well. A mass of humanity poured towards the gondola.

We got packed in the middle. The herd of cattle squeezed, people pushed. “Quit pushing,” I yell. “I’m not pushing,” I hear back. “Yeah right, we’re just pushing ourselves!” I scream. The wife and I felt like the Spartans holding the Middle Gap of Thermopylae against the Persian onslaught. Just…a few…more…feet…and we can…make…the…entrance. We make it. The throngs continue to push. We get on the gondola and float over the mountainside, Summer Grifter coursing through our veins. Not a bad beer for not a bad night!