In the beginning of March, we had received a pair of Chrome Kursk Pro-SPD shoes to review. Since then I’ve been able to put some miles on them. My rides have been a mixture of downhill, trail and even bicycle commuting.

From the get go I’ve loved the way they looked. I was excited to try them out because I’ve never been a fan of cycling specific shoes unless they look like skater styled shoes like Vans and even Converse All Star. 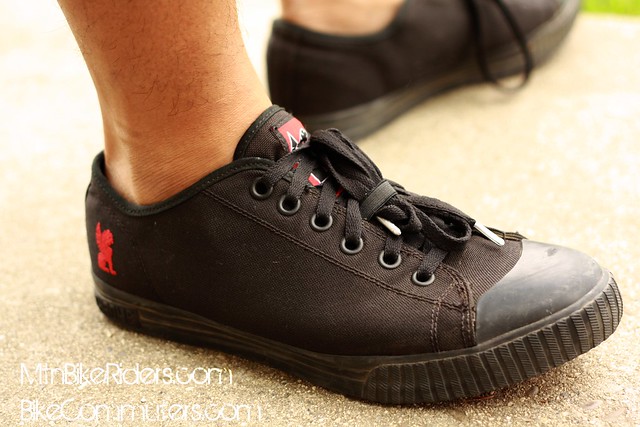 The Kursk Pro SPD retail for $95 and you can read all about their specs HERE.

One of the great features I liked about the Kursk is that they have a shoe lace “garage” in which you can tuck in your laces so they don’t get caught up with your chain rings or cranks. I chose to use Shimano SPD cleats and pedals. But they should also work with Crank Brother Pedals. Notice how the sole of the shoe doesn’t interfere with the pedal surface. There’s enough clearance between the pedal and rubber to ensure that you’re not fighting to get clipped in or out. 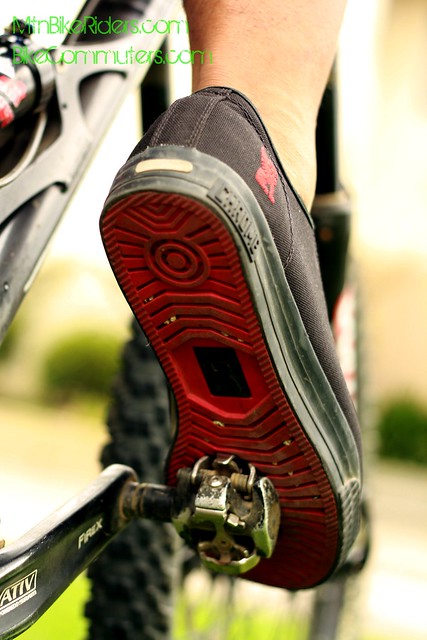 You actually have a choice to use the SPD feature or not. If you don’t want to use clipless pedals, then don’t remove the rubber and use the shoes with standard platform pedals. But if you use SPD, you’ll need a box cutter and possibly a pair of pliers to remove the rubber cover. Keep in mind, once its off, its off. Let’s talk about the overall performance of this shoe both on and off the bike. There’s no other way to say this, but the Chrome Kurks Pro SPD shoes are very uncomfortable. As much as I wanted to fall in love with them, my feet wouldn’t let me. I noticed a couple of problems with the shoes and I’ll explain all that in two parts.

1. When riding with them, I can certainly feel where the cleat sits beneath my feet. I’m not sure what it was, but my feet would ache within the first 2 miles of my ride. I can only only assume that the sole itself isn’t stiff enough to handle the pressure of pedaling so it would flex as I’m putting power to the pedals.

I even tried these with my Shimano DX platform/SPD pedals thinking that the platform would help add some stability, but it didn’t. The best way for me to describe this feeling is this; let’s say you’re wearing a pair of Converse or even Vans. Now get on your bike that is equipped with SPD pedals and start pedaling, see how uncomfortable it is. Well that’s the exact same feeling I was getting with Kursk. What sucks even more is to try and do downhill with these shoes. During a practice session before the race, I attempted to ride the race course while wearing the Kursk. Half way down the mountain, my feet were on fire because of the pain I was experiencing with the shoes. 2. When you’re not on your bike, walking in them is doable, but make sure you don’t do it for too long. The sole of the shoe makes the cleat sit a bit higher, so that means it sticks out more, therefore, you’re striking cleat to ground as you’re walking, clik-clak clik clak clik clak…just think of it as this…tap shoes.

You have to understand that I’ve tested other foot wear before and the last pair I tested performed wonderfully. The Sette Nix are almost half the price and far more comfortable than the Chrome Kursk Pro SPD shoes. In all honesty, I was pretty disappointed with the Kursk, I was hoping they’d be the shoe that I could recommend to everyone because Chrome has a pretty good reputation when it comes to their bags, unfortunately, the same could not be said with the Kursk Pro SPD.