I was just realized that men call their spandex cycling shorts…”spandex” and women will call them “tights.” 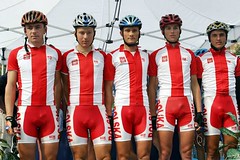 …and I think I know why!

Check this out, if you’re a dude, wearing tights/spandex is emasculating already. So men will look for ways to make the item sound less lady like and more manly. It’s kinda like calling Knickers, Capris…

When we think of tights/spandex we think of ballet people such as The Nut Cracker…horrible title.

We also think of Richard Simmons or some sort of dance like activity like modern dance. If you’re old enough to remember, it probably will bring thoughts of the TV show…”FAME!”

Once in a while you’ll hear men them “lycra.” But that’s just as bad since that’s just as gay as the previous name. It’s terrible men have to wear ballerina clothing just to ride their bikes, so I’m proposing a new name to spandex/lycra/tights….the new name will be!

“Chones”…thats right Chones. It’s pronounced “ch-o-(short O sound)-Nehs” It’s the same thing as what folks that speak Mexican call underwear. Yah you might as well call it underwear since its as tight as one and your package is there for the whole world to see. Besides, the Urban Dictionary describes Chones as: “nuts, nutsack, nadsack, nads, jewels, balls, scrotum, ball bag, bollocks…”It’s practically the same thing!

So with the new name, Chones…it already has a masculine sound to it. Say it with me…Chones…Doesn’t that sound WAY better than “spandex, lycra or tights?”….Chones….